Smartphone shipments are slowing down, but new tech innovations dependent on smartphones are skyrocketing.

A recent report from the International Data Corporation shows that smartphone growth is slowing. This probably isn't news to tech investors and it isn't necessarily a bad thing, either. There's plenty of opportunity even with smartphones slowing down, and many tech companies are already ahead of the game.

The shift away from smartphones has led the tech industry to pursue other avenues, like wearables. The move is evident with Google (GOOGL -0.90%) already selling Glass to early testers and Samsung (NASDAQOTH: SSNLF) on its second-generation Gear smartwatch. Not to mention Sony's also on its second version of its smartwatch, and Apple (AAPL -2.12%) is rumored to release a watch later this year.

Juniper Research estimates that worldwide wearable spending reached $1.4 billion in 2013, but will skyrocket to $19 billion by 2018. That's a huge opportunity for tech investors, but won't come without some hurdles.

Samsung's first smartwatch, the Galaxy Gear, didn't receive stellar reviews. But the company recently released the next iteration of the device, dropping the Android operating system (and the Galaxy label) in favor of its own Tizen OS and is trying again.

Google Glass is essentially doing the same. Google has been slow to release access to Glass in order test out the product. As the public has been introduced to the revolutionary device, both the company and consumers have adapted. It's not a perfect product, but we're still in the early stages of wearables.

Both Glass and the Gear show that we're still in the early stages of experimentation with wearable tech. But while we don't know which types of devices will be welcomed by consumers, we know smartphones will play an integral role.

In a 2013 report about wearable tech, research firm IHS said, "As the number of smartphone users grows and the smartphone becomes the hub of information for its users, there will be an increasing number of devices that will connect to and exchange data with smartphones."

Whether or not Glass or Samsung's Gear are for sale in five years isn't really the point. The fact that wearables will be here, in some form, is what investors should be considering -- and smartphones will be their main hub.

One phone, many opportunities
Aside from the wearables market, there are two major opportunities in a saturated smartphone world. The first is the ability for Google, Apple, and Microsoft to sell more services and goods through their ecosystems. Slowing smartphone growth means there's more people who already have the devices, and can spend money on cloud storage, app downloads, mobile games, ad sales, etc. In the first quarter of fiscal 2014, Apple's iTunes earned $2.4 billion in revenue. That's an amazing amount of quarterly revenue that doesn't include hardware sales. 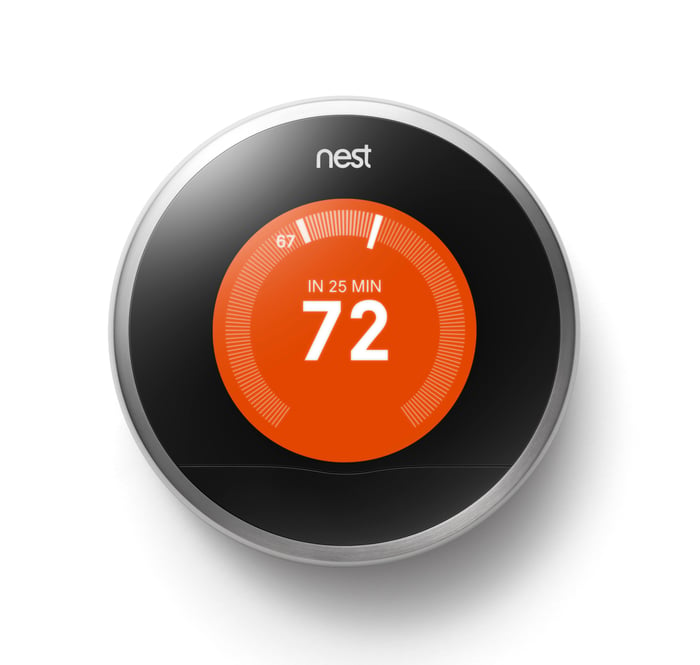 For Microsoft, rumors are swirling that the company should keep the new Nokia X smartphone around, which runs on Android, simply so it can get users hooked on Nokia HERE maps, and Microsoft's OneDrive, Bing, Outlook, and Skype. Smartphone services are a great long-tail opportunity in a slowing smartphone world, and they're becoming more important every year.

But app and services sales aren't the only option. Just as a lot of wearable tech will rely on a smartphone as its main hub, the coming Internet of Things (or IoT) will depend on smartphones in a similar way. IoT allows previously "dumb" objects like a thermostat, refrigerator, car, etc. to communicate data about themselves to smartphones.

Google recently purchased Nest, the smart thermostat and smoke detector company, which allows users to view updates, change settings, and monitor these home services via their smartphones. The move was a big signal that the future of tech companies isn't in traditional mobile models, but rather in how those mobile devices enable communication among all sorts of objects. Smartphones can already start our cars, unlock our front door, and their uses are only going to grow in the IoT.

Foolish thoughts
While some tech investors may traditionally focus on hardware sales, the model is changing. Of course, new devices will always play an important role, but the services those devices provide may be what truly drives growth in the near future.

As wearables and the Internet of Things come into their own, smartphones will drive their adoption. This leaves companies like Apple and Google wide open when it comes to new revenue opportunities. And it'll be up to investors whether they can move past device sales and see the broader the picture.

Fool contributor Chris Neiger has no position in any stocks mentioned. The Motley Fool recommends and owns shares of Apple and Google. It also owns shares of Microsoft. We Fools may not all hold the same opinions, but we all believe that considering a diverse range of insights makes us better investors. The Motley Fool has a disclosure policy.