Google's pending purchase of Nest Labs proves how important the future of connected "things" will be.

This week Google (GOOGL -0.20%) announced it's in the process of purchasing Nest Labs, the company famous for its smart thermostat that learns users' energy preferences. Google will pay $3.2 billion for Nest once the deal closes in a few months, which is the company's largest acquisition behind its purchase of Motorola Mobility for $12.5 billion. If you're searching for a reason why Google would pay so much for a seemingly simple company, it all has to do with the coming technological wave called the Internet of Things.

Just like the Internet of Things, Nest products fade into the background. Source: Nest Labs. 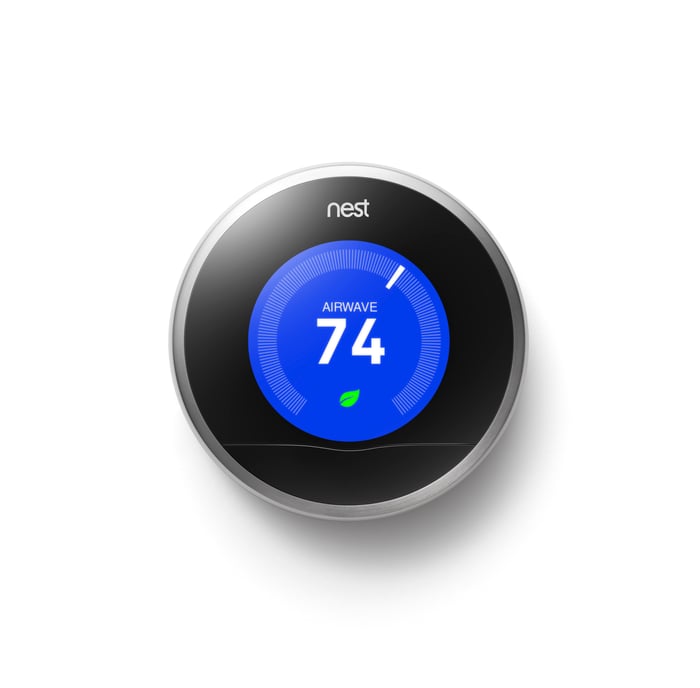 The Internet of what?
A few billion dollars for a company making sleek thermostats and fire alarms may look like a lot of money. But to understand Google's intentions, it's important to note how connected devices are evolving from the tablets and smartphones we use today into a world of connected "things" like coffee pots, refrigerators, cars, homes, and more. It's what people refer to as "The Internet of Things," which usually includes objects that have never been tied to the Internet previously but will soon communicate with us and other objects around it using sensors and wireless connectivity.

Nest has been at the forefront of the Internet of Things, starting with its smart thermostat back in 2011 and most recently with its smoke and carbon monoxide detector. Once the smoke detector, called Nest Protect, is connected to a Wi-Fi network, it can tell a user which room smoke is coming from, whether the alarm is going off, communicate battery levels, whether carbon monoxide has been detected, and send those alerts to a smartphone or tablet, in addition to in-house warnings.

The company's other product, the Nest thermostat, is made to constantly learn the preferences of its users so it can automatically adjust the temperature to save energy. It learns sleeping and and waking patterns, as well as when you leave the house to optimize energy efficiency using its light, humidity, and activity sensors. The device programs itself in the background, while users benefit from automation and energy savings, without ever having to program the device.

The long-term view
While these devices may seem a bit futuristic and possibly a little too connected for some, their use of sensors, automatic programming and communication with other smart devices is what part of the Internet of things is about -- making dumb devices smart so they can be more efficient and communicative. And more of it is on the way.

Google's pending purchase of Nest shows just how much the company is looking toward a future where people aren't the only ones connected to the Internet. The company has so far built its business connecting people to information on the Internet and then selling ads around that information. That may be a bit oversimplified but it's basically the gist of its business. But Google's foray's into wearable tech, autonomous cars, and now connected things means the company is poised to benefit from the coming technological changes.

For investors, this is a long-term play for Google and doesn't add anything to its bottom line right now. Sure, Nest has sold hundreds of thousands of its thermostats, but it's nothing compared to Google's overall business. The purchase is an investment in where the future of tech is headed. The Nest acquisition will give Google an advantage against other companies that will eventually enter the Internet of things. Just as Google launched Glass to be on the cutting edge of wearables, the purchase of Nest will help put it firmly into the coming connected things world.

Gartner expects installed base units for Internet of things to hit 26 billion units in 2020, excluding PCs, smartphones and tablets. The firm said in a recent report that, "Emerging areas will witness rapid growth of connected things" including banking, insurance, health care, utilities, transportation, and agriculture. That matches up with International Data Corporation's research that said the Internet of Things is "poised to change everything" and will result in $8.9 trillion in global revenues by 2020. It'll likely take years to see any direct benefit to Google's bottom line, but that shouldn't deter long-term investors. Google is making itself relevant in world that doesn't yet exist, and in the tech space that's no small feat.

Fool contributor Chris Neiger has no position in any stocks mentioned. The Motley Fool recommends Google. The Motley Fool owns shares of Google. Try any of our Foolish newsletter services free for 30 days. We Fools may not all hold the same opinions, but we all believe that considering a diverse range of insights makes us better investors. The Motley Fool has a disclosure policy.

Why Desktop Metal Was Outpacing the Market Today