The nation's largest biodiesel producer had its best year ever in 2013, but the current regulatory environment could provide a new set of challenges in 2014.

Remember when it was an accepted fact that renewable fuels were a lost cause, unprofitable, and had no place in your portfolio? Me neither. 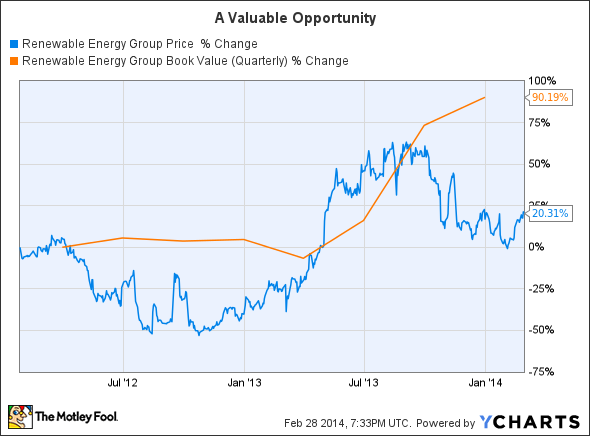 "Despite" producing more biodiesel than any other company in the United States, Renewable Energy Group (REGI) continued its impressive growth in 2013. The year saw the biodiesel leader make several acquisitions to support its growing biodiesel and heating oil operations, agree to purchase synthetic fuels and chemicals producer Syntroleum and its stake in a commercial scale facility with Tyson Foods (TSN -3.74%), secure a contract to power generators at the Super Bowl in New Jersey, and upgrade its existing infrastructure to power growth for years to come. There was plenty more to love about Renewable Energy Group in the last 12 months -- and it has kept the momentum going so far in 2014 -- but regulatory decisions could make the next 12 months more uncomfortable.

The quick and dirty on 2013
It's difficult to argue against the growth achieved in 2013. In fact, it's nearly impossible. Renewable Energy Group announced the following growth highlights compared to 2012:

Impressive? Yes. New or surprising? No. Falling feedstock prices (discussed below) helped margins toward the end of the year and will help spread margins in 2014 -- an important and lucky break without the Blenders Tax Credit, or BTC -- but the most important factor driving the company's growth was a targeted streak of acquisitions and upgrades to biodiesel production facilities. The acquisitions and upgrades continue to give Renewable Energy Group a big competitive advantage. Unlike fermentation products that use sugar feedstocks, biodiesel can be produced from a broad range of feedstocks (link opens PDF) including canola oil, corn oil, cottonseed oil, palm oil, soybean oil, and animal fats such as poultry and tallow. Prices tend to follow each other closely, but the diversity provides a unique opportunity to hedge against volatility. Of course, you need the proper infrastructure in place -- feedstock flexible process equipment, a broad distribution network, and the like -- to take advantage of the opportunity and maximum margins. Luckily, Renewable Energy Group passes the test. That has allowed the company to grow shareholders' equity (you know, that thing that gives meaning to investing?) every quarter since its IPO in early 2012. In fact, the biodiesel leader managed to grow book value per share from $9.46 at the end of 2012 to an impressive $17.97 per share at the end of last year. Find another company that has boosted (tangible) value for shareholders by 90% in the past 12 months. I'll bet the list is awfully short.

What to expect in 2014 (and beyond)
While the company announced that it had agreed to purchase synfuels and renewable diesel producer Syntroleum -- and a commercial scale facility jointly operated with feedstock supplier Tyson Foods -- the acquisition has not closed and will not be included in guidance or discussed by management until it does.

That's quite alright in my book, as the acquisition of synthetic biology pioneer LS9 and its industrial biotech platform is what's really exciting to me. I discussed the surprising acquisition and growth initiative in more detail not too long ago, but it essentially allows Renewable Energy Group to leverage its powerful biodiesel business -- and cash-generating machine -- to fuel growth into an industry with an incredibly bright future. By the end of the decade (and likely much, much sooner) the company will have a portfolio of renewable fuels, commodity chemicals, and specialty chemicals.

The biggest thing pressuring Renewable Energy Group in 2014 will be the expiration of the BTC. This happened before in 2012 before it was reinstated retroactively last year. While it could again happen -- management said it's a distinct possibility -- the company is proceeding as if the year will go on without the government credit. It will certainly hurt profitability, but the company's push to create a feedstock flexible stable of biodiesel manufacturing facilities will help support margins. I can't sugarcoat things for investors: 2014 will be drastically different from last year. However, the long-term growth opportunities remain intact. It's also encouraging to see management go out and create its own growth opportunities in synthetic fuels and industrial biotech.

Foolish bottom line
My Foolish colleague Adam Levy and I have been telling investors about the opportunity presented by Renewable Energy Group for several years now. Despite the expiration of the BTC and the drastically lower margins that will occur as a result, I believe the company remains a strong addition to any portfolio. The growth that will continue to occur in 2014 and beyond and the extreme discount shares currently trade at compared to book value make it difficult for long-term investors to pass up.