Please ensure Javascript is enabled for purposes of website accessibility
Log In Help Join The Motley Fool
Free Article Join Over 1 Million Premium Members And Get More In-Depth Stock Guidance and Research
By Maxx Chatsko - Feb 18, 2014 at 11:42AM

Renewable Energy Group is jumping into biobased chemicals with its newly acquired industrial biotech platform. Will it finally gain some respect from investors?

The level of uncertainty facing Renewable Energy Group (REGI -0.07%), the nation's largest biodiesel producer, reached a heightened level after the blender's tax credit expired on the last day of 2013. The credit was overwhelmingly responsible for the company's profitable operations last year, which has many fearing the worst for margins this year.

It is possible for the credit to be reinstated retroactively in the future (as it was for 2012), but the U.S. Environmental Protection Agency is facing larger problems as it nears a final decision on the future of the Renewable Fuel Standard. Besides, investors can't feel completely comfortable being at the mercy of the EPA every 12 months.

While Renewable Energy Group has invested heavily in efficiency and feedstock flexibility to combat volatile input costs -- and those investments will certainly widen margins -- biobased diesel fuels, whether traditional biodiesel or renewable diesel, will remain low-margin products. That's just reality. It's also a big reason why Wall Street is keeping its distance from the company. However, I think it's evident that the long term business and technology strategies are being overlooked by Mr. Market. Can the recent acquisition of industrial biotech company LS9 finally buy Renewable Energy Group some respect? And what does it mean for your window to invest?

Buy-o-tech
Management understands that while biobased diesel fuels are important for the nation's transportation sector and can be valuable products if commercialized intelligently, it just isn't wise to strap your business to the EPA year-after-year. That's why the executive team started off 2014 by diversifying its core biodiesel business with the addition of REG Life Sciences and the acquisition of LS9, an industrial biotech company developing a synthetic biology platform for producing commodity and specialty chemicals via fermentation. The opportunities are astounding. 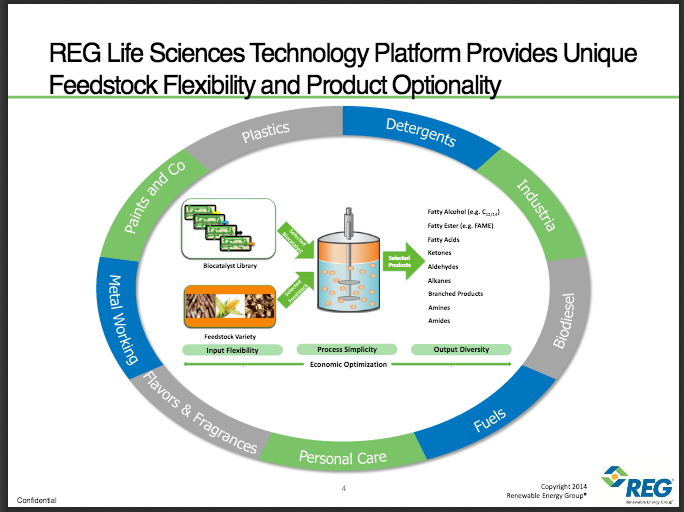 Investors shouldn't brush off the acquisition. Sure, it may take several years to fully commercialize the technology platform and consistently and reliably produce industrial quantities of products, but Renewable Energy Group can utilize existing operations to fund development. It can also leverage its extensive supply network for sourcing feedstock and take advantage of its national distribution network to sell products. 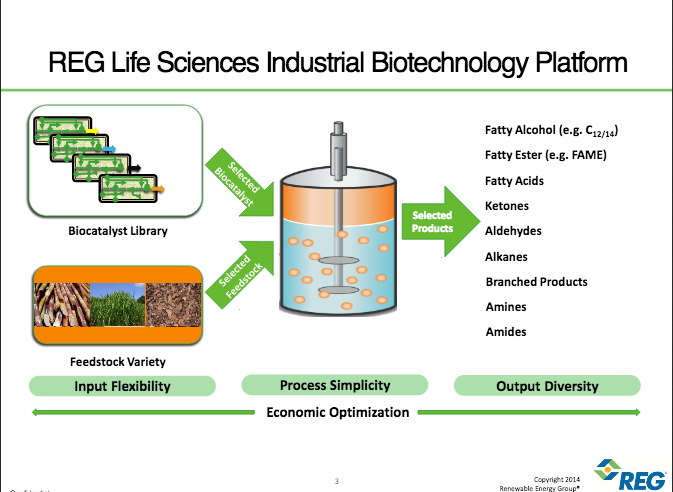 Will Mr. Market take notice of the growth potential?

Buying respect?
The stigma of biofuels has muted investor enthusiasm for Renewable Energy Group despite the continued creation of shareholder value. Let's evaluate the company's balance sheet with the following chart, which displays percentage change in shareholders' equity and share count as of the end of the third quarter of 2013 relative to the company's IPO. 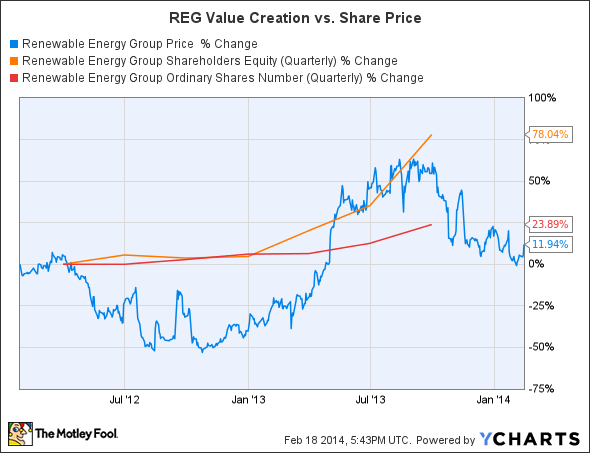 While share count had increased by 24%, shareholders' equity had risen 78% since its IPO -- more than offsetting the dilution. It's important to note two things here: (1) share offerings have only occurred during acquisitions of companies and biodiesel facilities and (2) value creation has occurred during times of regulatory uncertainty (no blender's tax credit) and certainty (blender's tax credit available). Yet, despite the growth in shareholders' equity, share price has only risen 12% since the company's IPO.

Perhaps an easier way to digest the mix of shareholders' equity gains and share offerings is to evaluate book value, which accounts for dilution.

Does that make any sense to you? Now, of course, by the time full-year 2013 results are announced the total share count will have increased to roughly 40.7 million, or an increase of 42% since the company's IPO in early 2012. But even assuming shareholders' equity remains constant -- bucking the trend of quarterly increases since the IPO -- book value would still sit at $13.94 per share. I think the numbers speak for themselves.

Foolish bottom line
Why did Renewable Energy Group turn to biotech? It's really quite simple. The bioeconomy (biopharmaceuticals, biotech crops, and industrial biotech) is one of the fastest growing parts of the American economy. The way I see it (and what the numbers seem to demonstrate), the annual volatility of the nation's biofuel initiatives and the market's distaste for biofuel companies in general are creating an enormously valuable long-term opportunity for investors when accounting for the company's new industrial biotech platform.