On Thursday, United Continental (NASDAQ:UAL) updated its Q1 investor guidance to reflect that unit revenue will be down 0.5%-2.5% this quarter. This compares to an initial expectation of a 0%-2% gain. United blamed the revenue weakness on the severe weather that has snarled U.S. air travel this year.

Most airline analysts have advised investors to look past United's weak Q1, arguing that the bad weather should be seen as a one-time occurrence with no long-term implications. Normally, I'd be inclined to agree -- investors should not be fazed by short-term setbacks for companies with good long-term prospects.

United Continental is on pace for an ugly loss in Q1.

However, this is just the latest in a long line of excuses that United's management team has used to explain away weak results. As has often been the case, United's excuses don't quite hold up to scrutiny. United's weak Q1 performance is merely one symptom of a much bigger problem: bad management.

The big excuse(s)
In an SEC filing on Thursday, United stated that it had been forced to cancel more than 22,500 flights year to date due to severe weather. This is nearly four times the number of cancellations during the same period in 2013!

United canceled about 20,000 regional flights in the first two months of 2014.

United estimated that weather-related cancellations negatively affected Q1 unit revenue by 1.5 percentage points in total. The company saw an additional 0.5 percentage point headwind from re-estimating the number of future tickets that would go unused. Lastly, United stated that the shift in Easter demand from March to April has been greater than expected.

It doesn't add up
While United has provided a lot of explanations (or excuses) for its weak performance, there is more to the story than meets the eye. First, United's initial estimate for a 0%-2% increase in Q1 unit revenue already put it well behind top competitors Delta Air Lines (NYSE:DAL) and American Airlines (NASDAQ:AAL).

Given the large scale of the three network carriers, there's no reason why the bad weather should have disproportionately affected United's unit revenue. Atlanta and Dallas (the largest hubs for Delta and American, respectively) have been hit by big ice storms this year, causing lots of flight cancellations. United seems to have had much more trouble than its rivals in recapturing revenue from canceled flights.

Furthermore, many of the headwinds that United cited when reducing its guidance should have been incorporated in its original guidance. Of United's 22,500 canceled flights year to date, more than 12,000 occurred between Jan.1 and Jan. 22, according to data from masFlight -- before United issued the guidance it just retracted!

Indeed, United CFO John Rainey told analysts on the company's January earnings call that the guidance for 0%-2% unit revenue growth was conservative. He specifically called out January flight cancellations and the Easter shift as factors driving lower unit revenue growth. It seems disingenuous for United to come back a month later and blame the same things for falling short of the already weak guidance.

A pattern of underperformance
From an investor perspective, the worst thing about United's latest issue is that it fits neatly into a pattern of consistent underperformance. Over the past three years, Delta has grown its pre-tax earnings rapidly. Meanwhile, United earned less money in 2013 than it did in 2011. (American also has vastly improved its profitability since 2011, but it had an "assist" from bankruptcy-related cost cuts.) 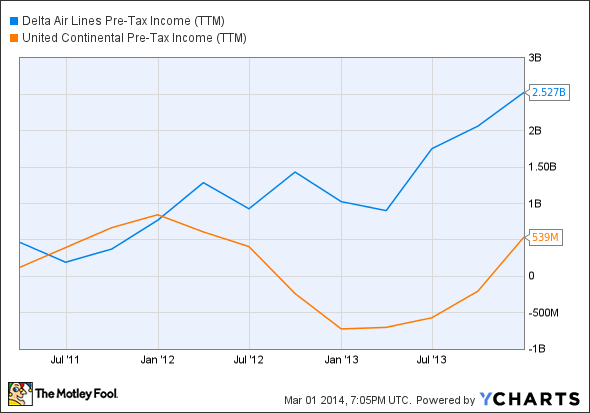 So far, it looks like Delta is well on the way to extending its pre-tax profit advantage over United in 2014. While United should still be able to improve its full-year 2014 profitability compared to 2013, the average analyst EPS estimate of $4.33 probably overestimates United's earnings power. Based on United's track record, investors should expect more excuses in the coming quarters to explain why United can't match its competitors' earnings.

Foolish bottom line
Sometimes, one-time issues cause a solid company's stock to go on sale, making for a great buying opportunity. Some analysts are interpreting United's recent guidance revision in that way.

However, sometimes a bad quarter is part of a broader pattern of weak performance. As of six months ago, United was mired in a streak of nine consecutive quarters of year-over-year earnings declines -- at a time when the rest of the airline industry was posting solid earnings growth! In fact, last quarter was arguably the company's only really strong quarter since the 2010 United-Continental merger.

Looking at the last several years as a whole, United's strong Q4 performance stands out as the anomaly compared to the numerous quarters when, for one reason or another, United has missed the mark. Investors should probably avoid United Continental until it starts delivering solid results on a more consistent basis.