When it comes to mobile system-on-chip designs, there is no company that offers the breadth and depth of products that Qualcomm (NASDAQ:QCOM) does. Qualcomm has benefited from the recent explosive growth of the low end of the smartphone market with its Snapdragon 200/400/600 series. It has also been great about capturing the high end of the mobile apps processor market. It's hard to find any high-end flagship device today without a Qualcomm apps processor, outside of the iPhone and some variants of the Galaxy S line. 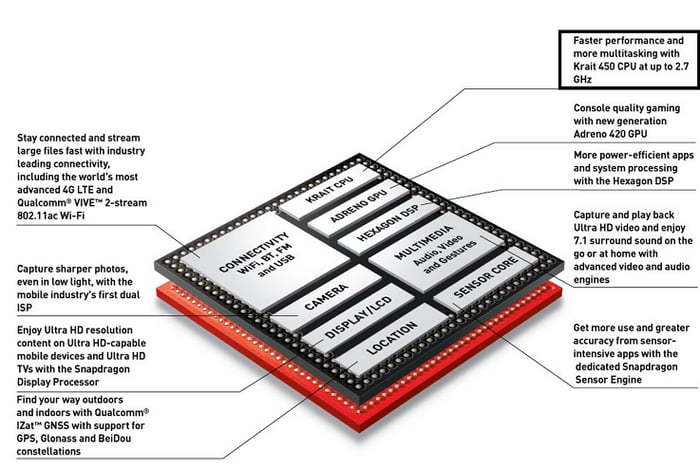 This is a very high-performance mobile system-on-chip, likely the most potent that will be available when it finally hits the market. The Snapdragon 800/801 line already offered best-in-class CPU, graphics, and camera performance. The Snapdragon 805 should extend that lead. In particular, given the clock-speed bump from 2.3 GHz to 2.7 GHz from the 800 to the 805, it should offer the highest CPU performance of any merchant SoC on the market today, outperforming even Intel's upcoming Moorefield system-on-chip, which should sport quad Intel-designed Silvermont CPU cores at 2.33GHz.

What's interesting, however, is that when this chip was first unveiled in late 2013, it was advertised as having max turbo of 2.5GHz. Given that the Snapdragon 801 clocks at 2.5GHz, it seems that Qualcomm was gunning for even higher performance for the next step in the 800 line. How could Qualcomm have achieved this?

Snapdragon 805 looks to be a tablet-focused design
If you look closely at the block diagram of the Snapdragon 805, you will notice the lack of an integrated modem. This suggests that it is meant for large, high-end smartphones and tablets. Indeed, at Mobile World Congress, Qualcomm was demonstrating the Snapdragon 805 in a 10.1-inch tablet chassis rather than in a smartphone chassis, and it's clear that this was in order to support the power consumption of the device at the full, advertised performance level.

It's not inconceivable that this product will also find its way inside of a larger smartphone, perhaps a Samsung (NASDAQOTH: SSNLF) Galaxy Note IV. Samsung is one of Qualcomm's largest customers on the chip side of things. Such a product could be made to throttle when the thermal load gets too high -- the full performance could be had for short bursts in a less thermally tolerant form-factor. The Snapdragon 805 is likely to find its way into larger phones and tablets, but it's important to keep in mind that the odds of the chip sustaining that kind of performance for long periods of time are slim to none. Smartphone workloads can be pretty short and bursty, though, so it may not matter.

Foolish bottom line
Qualcomm's biggest strength is that when the market asks for a product, it can quickly deliver -- and deliver in spades. Today, no other merchant silicon vendor has the breadth and depth of product offerings, the differentiated IP, the market share, and the profitability in mobile processors that Qualcomm has. This, more than anything, is why the company continues to win in mobile silicon.