Forbes' latest MLB team valuations are out, and not surprisingly, the New York Yankees lead the pack. They and the Los Angeles Dodgers are the only two above $2 billion in 2014, marking the first time a club without pinstripes has passed that threshold. But beyond the income statement lies another area teams are competing in: social media.

Baseball's social footprint
According to a study from SportsBusiness Daily, the Yankees and Dodgers fare quite well in the world of Facebook (NASDAQ:FB) and Twitter (NYSE:TWTR), too. The outlet recently published rankings that track MLB teams' combined footprint on both social media platforms.

Along with the Red Sox, the Yankees and Dodgers are the only teams that have gained at least 1.8 million combined Facebook "likes" and Twitter followers since 2011. Just as in Forbes' rankings, New York leads by a considerable amount.

How much are these followers worth?
And because social media followers have tangible value -- most experts peg a Facebook "like" at $8 and a Twitter follower at $2 -- it's possible to see what the Yankees' domination is worth.

As you'd expect, Facebook "likes" make up the majority of teams' social media values. The Yankees and Red Sox, which reside in the two biggest MLB markets, have a healthy lead over the rest of the league. The middle-tier contains a mixture of teams with recent success (Giants, Rangers) and others with historically dedicated fan bases (Cubs, Tigers).

For the most part, social media following correlates with team valuation, and it makes sense. Bigger-market clubs usually have access to larger revenue streams, spend more on payroll, and typically have better fan attendance. One outlier is the Washington Nationals, who rank 13th in team valuation, but last in social media following. The likely culprit? The Nationals' relocation from Montreal after the 2004 season, which forced the team to cultivate a new fan base. 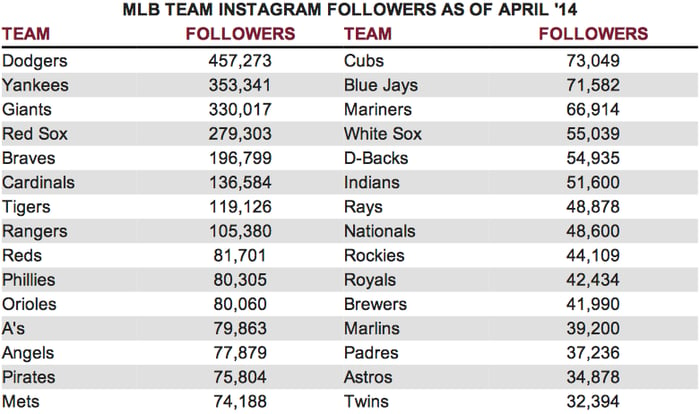 Compared to Facebook and Twitter, most of the top 10 remains the same, save for the Dodgers at No. 1. Less research exists about the value of an Instagram follower, but data visualization firm SumAll estimates one is worth 10 Twitter followers. By that math, the Dodgers' Instagram adds about $9 million to the team's total social media value, and the Yankees' account is worth $7 million.

SumAll doesn't extrapolate on why Instagram followers are more valuable, but I can think of one reason: Interaction on the platform is more visually appealing than Twitter. As Mashable wrote earlier this year, "posts on Facebook with photos get 53% more likes, 104% more comments, and 84% more click-throughs than text-based posts." The same is likely true on Instagram.

The bottom line
This data illustrates that just like on the diamond, the MLB breeds competition in the world of social media. And although the number of Facebook "likes" or Twitter followers won't directly affect a team's win-loss record, the difference between a strong and a weak online presence is worth millions.