It's not often you see Warren Buffett's name involved in a major sports story, but yesterday, it happened. Mortgage lender Quicken Loans announced it is partnering with Buffett's Berkshire Hathaway (NYSE: BRK-A) to offer a $1 billion prize to anyone with a perfect bracket in this year's NCAA Men's D-I basketball tournament. Before you pore over hours of game film, there are a few things you should know.

The insurance
The contest is made possible by what's known as prize indemnity insurance. Quicken Loans is paying Berkshire Hathaway a premium to insure a potential $1 billion payday. Contrary to popular belief, the prize will not be paid directly from Buffett's pocket. Additionally, the 20 best "imperfect" brackets will each be given a $100,000 credit to buy, refinance, or remodel their home.

As the Omaha World-Herald points out, neither side has revealed exactly how much the premium cost Quicken, but Berkshire has been here before.

The holding company was paid $10 million to insure Pepsi's (NYSE: PEP) "Play for a Billion" sweepstakes back in 2003. No one won the billion-dollar prize in that contest, which had a one-in-1,000 chance of being hit.

So what are the odds of getting a perfect "March Madness" bracket? 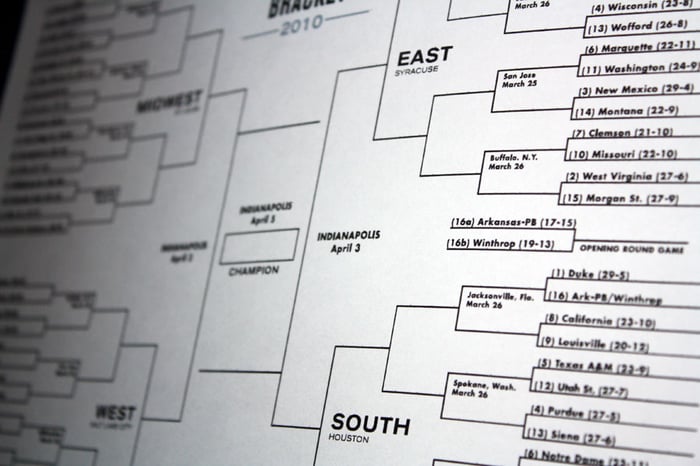 They're much, much lower.

The odds
A couple years ago, the Associated Press talked to Augsburg College professor Michael Weimerskirch, who explained the odds of filling out a perfect bracket.

If a coin flip is used to pick the winner of each game, the odds of a perfect bracket are one-in-100 quintillion -- that's a one with 20 zeros. Weimerskirch said, "You're just as likely to win Powerball three consecutive times."

However, most don't flip a coin to pick their NCAA tournament winners and losers. Assuming a semblance of basketball logic is used, DePaul's Jay Bergen puts the odds of a perfect bracket around one-in-128 billion. This number shrinks slightly to one-in-100 billion because Quicken and Berkshire are limiting the contest to the first 10 million people that sign up.

Assuming Buffett's company is underwriting Quicken's $2 million in secondary prizes, the premium is at least this amount, but probably not more than the $10 million it received to insure Pepsi's billion-dollar contest.

The strategy
Of course, the purpose of any sweepstakes is to boost exposure of the companies involved. In the case of Quicken Loans, Warren Buffett's name, and the sheer size of the prize offered have gained a significant amount of media attention.

Quicken is the fourth largest mortgage originator in the U.S., yet it trails its closest peers -- JPMorgan Chase (NYSE: JPM), Bank of America (NYSE:BAC), and Wells Fargo (NYSE:WFC) -- in social media exposure by a significant margin.

In the first day of its "Billion Dollar Bracket Challenge," Quicken's Twitter (NYSE: TWTR) account had more than 30 times its normal influence, according to Twitalyzer. Since Monday, the @quickenloans handle has boosted its follower count by about 5%. Before this date, it had taken roughly a month to match this growth.

On Facebook (NASDAQ: FB), the official Quicken Loans page has added almost 10,000 likes in the past 24 hours.

Using the commonly cited values of $8 for a Facebook Like and $2 for a Twitter follower, Quicken generated roughly $85,000 in social media value over the first day of its contest. With the end date set for March 19, the company can generate over 500,000 additional Facebook Likes and 60,000 more Twitter followers if the hype keeps its pace.

That's close to $4.5 million in added social media value in a little under two months -- more growth than what Wells Fargo or JPMorgan Chase average in a year.

The future
Of course, if even half of this forecast can hold, the social media value gained by Quicken Loans will likely exceed the cost of its insurance policy with Berkshire Hathaway. Judging by the company's lack of a following on Facebook and Twitter compared to its peers, the strategy makes sense.

The decision to include Warren Buffett's name in the contest's promotional material is also a smart move. The world's fourth richest man is arguably the most famous billionaire in America, and the prospect of winning $1 billion from his company is simply impossible to ignore.

I expect a record number of brackets to be filled out this year, and while the odds of winning are worse than the odds you'll actually become a pro athlete, it doesn't hurt to try.