If nothing else, it was a symbolic victory.

7.1 million Americans signed up for health insurance through exchanges established as part of the Affordable Care Act, commonly known as Obamacare. The White House celebrated this achievement with great fanfare, especially after the disastrous launch of the Obamacare exchanges left many doubting that the goal of 7 million enrollees would be reached by March 31.

While the comeback was dramatic, the enrollment count isn't the Obamacare figure that should impress you the most. And that number is one that you probably haven't heard about at all.

Subtraction that adds up
It's not that the latest enrollment figure isn't important. However, it is incomplete.

From an optimistic viewpoint, the number could rise since the Obama administration extended the enrollment deadline for anyone encountering a hardship in signing up for health insurance. The negative perspective, however, is that up to 20% of the 7.1 million individuals haven't paid for their insurance and might not ultimately be included in final enrollment totals. And how many of those individuals are relatively healthy -- a number that still isn't known -- could be more critical than the total itself.

There is a statistic, though, that doesn't require us to wait for more information and is overwhelmingly positive. The national rate for readmission of Medicare patients to hospitals after 30 days is falling significantly. 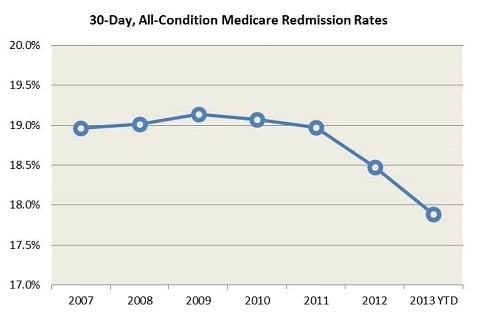 After hovering around 19% for years, hospital readmission rates began dropping beginning in 2012 and continued to do so into 2013. (The above chart reflects data through August of last year.) The national rate appears to still be falling considerably this year based on the latest data from the Centers for Medicare and Medicaid Services, or CMS.

Readmissions cost U.S. taxpayers a pretty penny. The federal government estimated that hospital readmissions for just Medicare patients has historically added up to $26 billion annually -- $17 billion of which could be avoided.

There's one wrinkle in the theory that Obamacare caused the big decline in readmission rates, though. The financial penalties for hospitals didn't go into effect until October 2012, but the sharp drop-off began earlier that year.

Also, a report from CMS published last year stated that "many factors could have played a role in the observed changes in readmission rates." Researchers suggested that health reform could be one explanation. Another possibility could be that more patients received care at hospitals after being discharged without being readmitted -- such as in emergency rooms or observational stays.

It makes sense, however, that Obamacare's financial penalties for hospitals made a big difference. Less money for high readmission rates provides ample incentive to improve. Hospitals across the country scrambled to focus on efforts to minimize readmission rates. Many began those efforts prior to the actual implementation of the penalties, which could help explain the drop in rates in the earlier part of 2012.

Opportunities
Astute investors know that where money flows, there's usually an opportunity to profit. One potential way to win from this trend could come from telehealth.

Market researcher IBISWorld projects that the market for telehealth will expand by over 30% annually during the next five years. Qualcomm (NASDAQ:QCOM) represents one smart way to ride this wave. The big technology company's Qualcomm Life subsidiary markets a hub that pulls data wirelessly from medical devices and sends the information to remote systems for clinical professionals to monitor. Qualcomm Life already partners with more than 100 medical device and software companies.

Polycom (NASDAQ:PLCM) looks to be another way to take advantage of growth in telehealth. The company develops products that help connect medical professionals with each other and with patients through video. Eight of the top 10 hospitals in the world plus all top 10 pharmaceutical companies use Polycom's technology.

Be prepared for continued Obamacare figures throughout 2014, from enrollment of younger Americans to how many previously uninsured individuals gained insurance. Readmission rates might not get as much attention, but they could present opportunities for investors to receive the best kind of numbers -- the ones with dollar signs and commas.