Is this the start of a turn?
Fiscal 2013, which ended in October, was rough for Joy, capped by a 25% sales drop in the fourth quarter. In response, Joy has been cutting jobs and closing facilities. However, there was a ray of hope in Joy's first quarter conference call.

CEO Edward Doheny noted that, "Our service bookings in the first quarter increased year-over-year by 4%, the first year-over-year increase since the third quarter of 2012." He explained that, "...the ability [for customers] to delay rebuilds and service in most regions appears to be nearing a conclusion." In other words, wear and tear is starting to take its toll. That suggests that a sales upturn may not be far behind.

Copper and coal
Joy recently started calling its aftermarket business "services," with Doheny saying the area is a, "...core strategy for our business..." In fact, it's built a new services facility in Peru specifically to serve copper miners. Joy is looking for global copper demand to grow by 4% in 2014, which should be a big benefit to South America and producers. However, the bigger news was in coal.

(Source: US House Subcommittee on Energy and Natural Resources)

Doheny noted that, "For the first time in 2 years, we are seeing some incremental positive signs coming from the U.S. coal market." He expects U.S. coal production to tick up in 2014: "Given increased power demand and the expectation for natural gas prices to remain above $4, the Powder River Basin and the Illinois Basin are expected to see production growth in 2014..."

One of the best ways to take advantage of this is Cloud Peak Energy (NYSE:CLD). Cloud Peak operates exclusively out of the Powder River Basin. And, unlike most competitors, it has remained profitable throughout coal's downturn. Cost cutting (including buying used equipment, much to Joy Global's chagrin) has been a big part of that, but that just means that margins will expand more quickly when coal prices recover.

And, notably, Cloud Peak has no exposure to metallurgical coal. In its fiscal fourth quarter call Joy Global sounded a pessimistic note on met because its equipment sales indicate that new mines are set to come on line in 2014 that will exacerbate an already oversupplied market.

An oil mining play
Doheny also added that, "Given the increasing need for energy in the world, we continue to monitor oil sands projects and believe that current oil prices make this an attractive investment opportunity." Oil sands are mined, not drilled. Although there are pure plays in the space, a dark horse you might want to back in the oil sands is Teck Resources (NYSE:TECK).

This diversified miner doesn't currently have any oil revenues, but it's teamed up with two oil industry giants to build a new mine. Teck only has a 20% stake in the project (the other two partners have approximately 40% each), but when the oil starts flowing in 2017, Teck will have an entirely new revenue stream to boost growth.

What makes Teck even more interesting is that met coal makes up a big portion of its business. That's justifiably left the stock weak and will likely remain a drag over the near term. However, Teck is financially strong and remains profitable despite the weak met market. In other words, this out of favor miner could be a decent turnaround play, with an oil sands kicker, for patient investors. 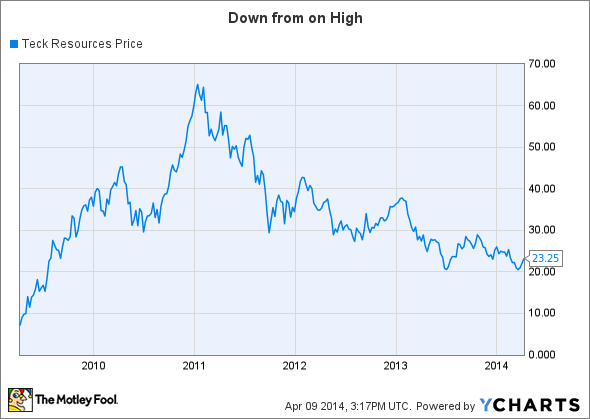 Still a tough market
Mining is still a tough market, so don't expect 2014 to be good to Joy. However, there appear to be at least a few bright spots on the horizon. Copper, U.S. thermal coal, and Canada's Oil Sands are three that Joy likes.

Is there Finally Something to be Joyful About in the Mining Industry? @themotleyfool #stocks $JOY $TECK $CLD Next Article
Current