As a longtime Intel (NASDAQ:INTC) shareholder, it has been tough watching this company stumble again and again when it comes to smartphones and tablets. I still vividly remember the presentations the company showed investors back at the 2011 investor meeting. The idea was that Intel was finally going to take mobile (that is, smartphones and tablets) seriously. Unfortunately, while Intel seems to be putting in a massive investment into mobile, it still can't get the right products out the door, much to the chagrin of long-term shareholders.

Burn, baby, burn!
In the most recent quarter, Intel's Mobile and Communications group lost a staggering $929 million. Now, keep in mind that Intel shipped only 5 million tablet units during the quarter, so the majority of this loss has nothing to do with the "contra-revenue" program that it laid out last November to gain tablet share. No, this is an extremely elevated level of R&D as a result of the company's push into mobile. 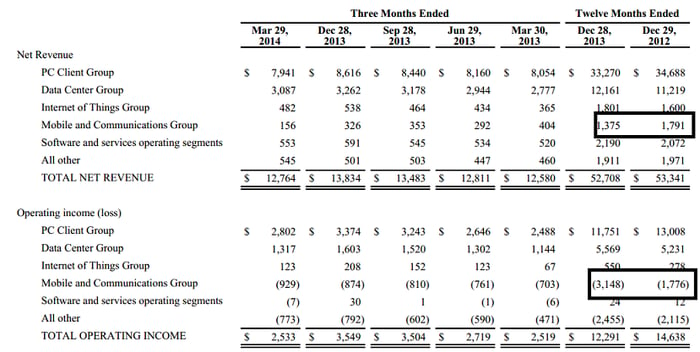 Of course, there's nothing wrong with spending to get the right products out -- Intel, fortunately, can afford to do this. The problem is that Intel has increased its R&D, mostly for mobile, dramatically over the past three years, and here in 2014 we're not even close to a payoff. This is a huge problem that investors can no longer afford to ignore.

Hey, what ever happened to those lofty 2013 projections?
Back in the May 2012 investor meeting, Intel laid out some pretty aggressive expectations for its "Other IA" group (which is now separated into several categories, including Mobile and Communications). The idea was that from a respectable $4 billion revenue base in 2012, the company would grow that by $1.5 billion to over $5.5 billion and cut the operating loss significantly. The operating loss for the Mobile and Communications group was $1.776 billion in 2012. 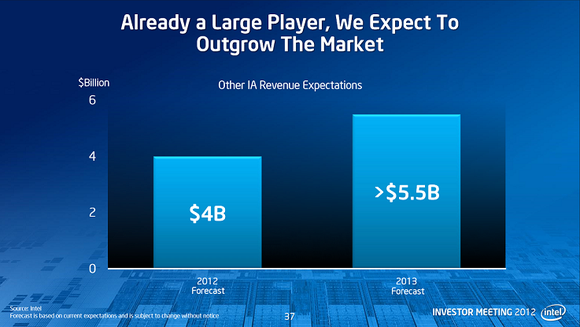 That, of course, didn't happen, with the mobile and communications group losing a staggering $3.175 billion during 2013. Intel grew R&D considerably but sales actually declined from $1.791 billion to $1.375 billion. The majority of this decline came about because Intel's 2G/3G modems saw a steep fall-off as shipments of LTE-enabled smartphones, powered by Qualcomm (NASDAQ:QCOM) discrete Gobi modems and Snapdragon apps processors, rose considerably. Intel's lack of an LTE modem to pair with its applications processor solution during 2013 was disastrous.

It'll be 2015 before progress is made
On the most recent earnings call, when pressed about the massive operating loss, CEO Brian Krzanich claimed that a "leadership" product stack in 2015 would be the key to significantly reducing that operating loss and eventually getting to profitability. However, we've heard this many times before. For example, in some of Intel's marketing materials, it has tried to claim that its chips already dramatically outperform those of its competitors. 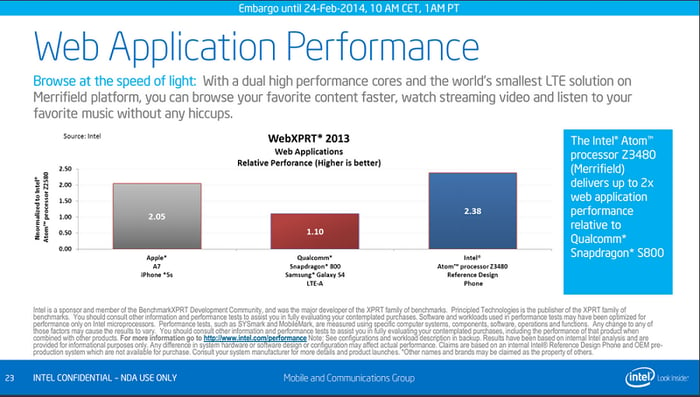 Now, while these benchmarks are hardly representative of general-purpose CPU performance (more on that another time), the point is that Intel claims that it already has leadership products. This leads to the following quagmire where exactly one of the following is true:

So we have a situation where after three years and over $5 billion of operating losses incurred, Intel's mobile product pipeline still isn't really good enough to compete for and win sockets profitably. Chips take time, but if Intel's 2015 offerings really don't turn out to be leadership, then something is horribly, horribly wrong.

Foolish bottom line
Intel's non-mobile businesses generate nearly $20 billion in operating income when taken together. Even a modest 10 times multiple to that would suggest a market capitalization north of $200 billion -- or a $40 stock price. Unfortunately, the PC market is still on the decline, and the mobile losses are wiping out a huge chunk of the company's operating profit. Once it's clear that Intel's mobile group can actually execute as promised, the market will be more willing to forgive these losses and the stock could trade north of $30. Until then, though, it'll all be about PCs and servers.