Drones represent an incredible technological advance that is coming out of the military industrial complex. But don't let the military image fool you -- the now ubiquitous GPS got its foothold in military applications, too. If you want proof that drones will assimilate into our daily lives, look no further than the energy industry.

A military device
Boeing (NYSE:BA) is a giant aviation company, with about 40% of its business tied to military sales. On that side, it makes the Phantom Eye. Boeing's Phantom Eye is a high altitude drone powered by liquid hydrogen. It can fly for up to four days carrying a 450 pound load. What might such a tool be used for? OK, let's be honest -- the best use is spying and, perhaps, blowing things up.

But that's just one side of the drone world. For example, Northrop Grumman (NYSE:NOC) recently watched as its X-47B unmanned aircraft landed itself on an aircraft carrier. This could be a big step toward computers taking greater control over our lives or a great wartime advance. After all, if a jet can take off, land, and fight without a human, Northrop Grumman just made war a whole lot safer. But, it could also be a way for remote and dangerous locations to receive supplies without the need to risk human life.

Where might that be? Perhaps in the frozen seas off of the coast of Alaska where the Kulluk drill ship ran aground last year. Imagine Boeing's Phantom Eye giving human managers an eagle eye view while Northrop's X-47B makes deliveries. And how about the K-MAX unmanned helicopter taking up to three tons of those supplies and delivering them to even more remote drill sites?

While drone sales like this probably won't move the needle at Boeing, which earned a record $86.6 billion in revenue last year, or at Northrop, which had nearly $25 billion in sales, they would help to diversify both companies away from the military. And the cost for this expansion would be virtually nothing, since the knowledge and expertise was built up on the government's dime. Moreover, as the government is getting more picky about its spending, such a shift would be particularly timely. For example, revenues in Northrop's Aerospace Systems segment fell 7% in the fourth quarter, partly because of weakness in its drone business.

The utility side
If supplying remote drill sites seems fanciful to you, how about considering something more mundane? Like inspecting utility boilers, towers, and electric power lines. Those are awful and dangerous jobs for humans, but not for drones. Private United Aerobotics is already offering drones for such chores; the going rate is around $5,000 a day. 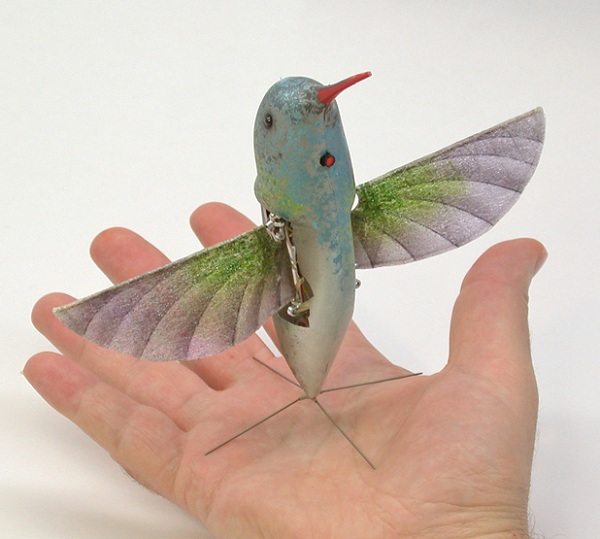 Now consider the Hummingbird drone from AeroVironment (NASDAQ:AVAV). This little wonder is literally the size of a small bird and can hover. AeroVironment's tiny little drone could easily be used to spy on people. Or, it could be used to inspect the duct work in a giant building or the inner workings of a factory. United Aerobotics is basically doing this kind of work right now.

U.S. military sales make up about 70% of AeroVironment's top line. But its drone expertise could easily be used in non-military applications. In fact, the company specifically hopes to "create opportunities beyond the military market." Getting more civilian orders would also help smooth out the top line, since military sales are driven by large orders. For example, after rising for three consecutive years, earnings fell by more than 50% in fiscal 2013 (years end April). "Government contracting delays for unmanned aircraft systems," was a big part of the problem.

The drones of tomorrow, today
There's a lot of tension when it comes to drones. That's understandable, but drones are already providing benefits to utilities. Taking more of that military know how into the civilian space doesn't take much imagination. AeroVironment is a drone specialist, but diversified Boeing and Lockheed are also worth keeping an eye on in this emerging space.

Believe It or Not, Drones Will Change the Civilian World for the Better @themotleyfool #stocks $BA $NOC $AVAV Next Article
Current