Check out these recent headlines:

The Census Bureau estimates at least 27 large counties will have smaller populations in 2050 than today, including China, Russia, Germany, South Korea, and Japan. This is not good news. There are two ways to grow an

economy: productivity growth, and population growth. Some of the world's largest economies will soon get no help from the latter.

To understand what an aging population does to an economy, it helps to know the story of Japan since the end of World War II.

Like America, Japan had a baby boom right after the war as demobilized soldiers married and families were rebuilt. Eight million Japanese babies were born from 1947 to 1949, which is enormous given a population of around 70 million at the time.

But Japan was bludgeoned during the last year of the war, with its industrial base and major cities bombed out. The book Embracing Defeat notes that in 1945, rural Japanese living standards fell to 65% of prewar levels, and city living standards to 35%. One million Tokyo residents alone were homeless, with more than a quarter-million buildings destroyed. Three months after surrender, an Australian newspaper noted that Japan had enough food supplies to "furnish a diet averaging only 1,551 calories per person next year, compared with 2,160 calories which the Japanese healthy authorities hold is necessary."

It's hard to support a growing population in these conditions. So the Japanese did something about it. Tokyo-based journalist Eamonn Fingleton explains:

Mariko Kato of The Japan Times explains how this was done:

Abortion was effectively legalized in 1948 ... The government also accepted other contraceptives, including the diaphragm, condoms and spermicide. Previously they were mainly considered ways to prevent sexually transmitted diseases.

This had a big impact on the economy. As Japan entered the 1970s and 1980s, the baby boom generation -- called "dankai," or the "massive group" -- hit their peak earning and spending years. They started businesses, bought cars, built houses and fueled an economic boom. Economists extrapolated this growth and figured Japan would own the 21st century. In 1988, former Reagan official Clyde Prestowitz said, "The American century is over. The big development in the latter part of the century is the emergence of Japan as a major superpower."

But over the last two decades, Japan's dankai ended their peak-spending years, and began retiring. Spending growth dropped and the need for assistance rose. The dankai passed the baton to a smaller cohort produced by Japan's small-family culture.

Japan's economy is smaller today than it was in the early 1990s. There are many reasons for this, but as Mark Steyn writes, "there is no precedent in human history for economic growth on declining human capital." In 1992, there were 86.7 million Japanese aged 15 to 64 (prime working age). Today, there are 77.5 million. That's the equivalent losing three-quarters the population of Tokyo.

Japan has demonstrated better than any country that it is devilishly hard to grow an economy with an old, graying, and shrinking population. This is an important lesson, because it describes a lot of the developed world today.

Yes, our country is aging. Baby boomers -- America's own dankai -- are retiring. But America has some of the best demographics in the developed world, largely due to immigration. Twenty-five million more people live in America today than did in 2004. That increase is like adding three New York Cities. The Census Bureau projects the U.S. population will rise by another 26 million over the next decade, and by more than 80 million by 2050.

Importantly, America's working-age population is still growing, and projected to increase by 5.5 million over the next decade. Tobias Levkovich of Citigroup writes that, for the first time since the 1990s, the number of Americans age 35 to 39 -- a sweet spot for spending -- is set to rise over the next two decades, according to Census Bureau projections.

Some of the biggest economies in the world can't say the same. Predicting the future is hard, but I think this is one of the most important charts of the coming decades: 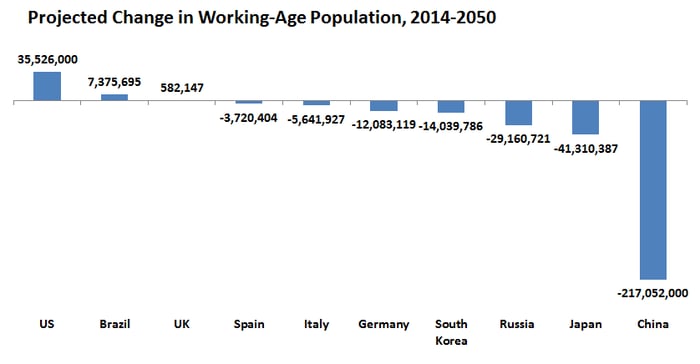 No one in the 1920s forecasting Japan's economic path could have predicted the demographic shocks it faced in the 1940s. That's true today, too: These are just projections, and projections are often wrong.

But there's so much focus today on how America's retiring baby boomers are going to hurt the economy. The truth is that not only will the U.S. add tens of millions of more workers over the coming decades, but few other countries can say the same. (India will grow its working population more, but its lower life expectancy and massive poverty tamps down this benefit). This is America's biggest edge over the rest of the world. And just as economists overlooked how devastating Japan's poor demographics would be 20 years ago, I get the feeling they're underestimating how advantageous America's will be 20 years from now.