Most of the world's offshore oil and gas discoveries are made in what's called the Golden Triangle. This runs from the Gulf of Mexico to the North Sea and then down to Brazil. Energy companies like ConocoPhillips (NYSE:COP) and Royal Dutch Shell (NYSE:RDS.A) (NYSE:RDS.B), however, know that in order to meet the world's growing demand, new sources of energy need to be discovered. That's what happened last week when two discoveries were announced in areas not typically known as energy powerhouses. Let's take a closer look at both finds and what these discoveries mean for the future of energy exploration.

Off the Ivory Coast
Two energy companies, one from France and the other from Canada, teamed up to discover oil off the Ivory Coast in Africa. The Saphir-1XB wildcat in exploration Block CI-514 was drilled to a total depth of more than 15,000 feet in about 7,500 feet of water. The well encountered a series of thick sands totaling about 1,150 feet along with a hydrocarbon column of about 130 feet.

The hydrocarbon column consisted of light oil and is the first discovery in the San Pedro Basin. The presence of a petroleum system is promising, as it will encourage both companies to continue exploring. The French company, for example, plans to drill two more wells off the Ivory Coast this year. Meanwhile, the Canadian explorer is already a major energy producer off the Ivory Coast, but it will continue to embark on a 10 well drilling plan in the region over the next two years. This discovery will likely help fuel more capital from both companies to continue exploring for oil in the region.

Offshore Africa is an important exploration area to many global energy companies including ConocoPhillips. The top American independent oil company has ongoing exploration efforts offshore of both Angola and Senegal. New discoveries in places like the Ivory Coast will help encourage ConocoPhillips and others to keep bidding for additional exploration blocks as Africa clearly has a lot of undiscovered oil off its coasts.

Finding gas in Malaysia
The other major discovery last week was a natural gas discovery by Royal Dutch Shell offshore Malaysia. The Rosmari-1 well was drilled to a total depth of about 7,000 feet and it encountered a very large gas column of about 1,475 feet. The finding is a very positive indicator of Shell's gas potential in the area.

While Malaysia isn't well known for its energy production, that's starting to change with each new find. Oil and gas from the region is very high margin thanks to its close proximity to Asian markets, which is why companies like ConocoPhillips are bringing so many new projects online over the next year. As the below slide notes, ConocoPhillips is building an important legacy position in Malaysia. 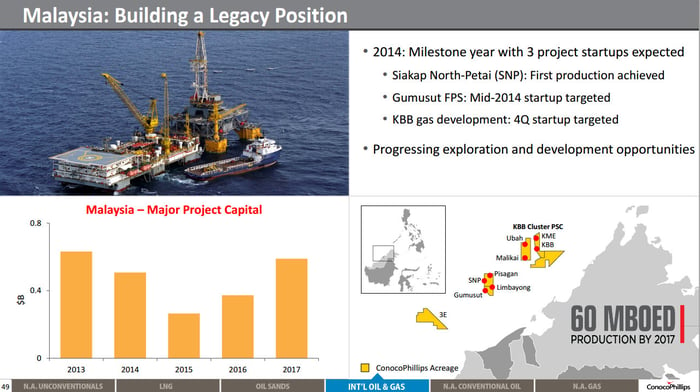 Shell is actually a partner with ConocoPhillips on the Siakap North-Petai development, which began producing oil earlier this year. It's also a partner with ConocoPhillips and others on the Gumusut-Kakap project, which is expected to start production later this year, as well as the KBB gas development. Needless to say, Shell's most recent discovery along with the 2014 start-up of high-margin projects will encourage Shell to keep exploring for oil and gas in Malaysia.

Investor takeaway
Oil and gas companies continue to find energy in areas not traditionally known as being big production basins. This exploration trend is going to become increasingly more important in the future as it will further diversify the world's energy supplies away from both the Golden Triangle and OPEC. It will also make investors in companies like ConocoPhillips a lot of money.

These 2 Big Energy Finds Are in the Most Unlikely Places @themotleyfool #stocks $RDS.A $COP $RDS.B Next Article
Current