If you're looking to diversify your dividend portfolio with a rock-steady health care company, Abbott Laboratories (NYSE:ABT) and Johnson & Johnson (NYSE:JNJ) are a great place to start. Both are dividend aristocrats, meaning that they've managed to increase dividends at least once per year for each of the last 25 years.

Not sure which is best for you? Here's a comparison to help you choose the better buy.

Dividend growth and sustainability
The first thing you'll notice is how Abbott slashed its dividend at the beginning of 2013. This is because it spun off its research based pharmaceutical division into AbbVie. Abbott shareholders at the time of the split received one share of the new company for each share of Abbott. To be fair I combined the two to find the compound annual growth rate (CAGR) of Abbott's dividend. 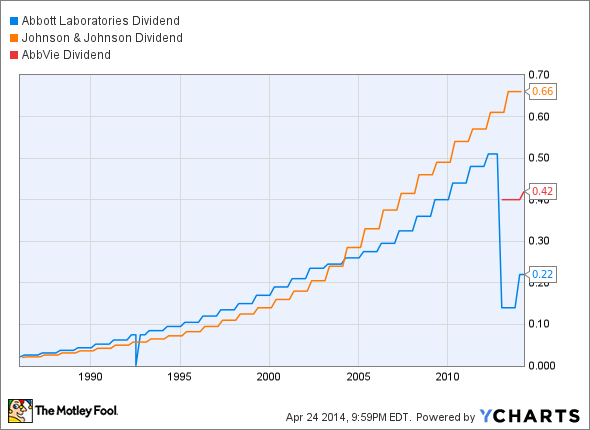 ABT Dividend data by YCharts

Over the past 25 years Johnson & Johnson's dividend CAGR of 12.3% outpaced Abbott's, but only slightly. If we focus in on the the past five years, Abbott takes the lead with a rate of 9.9% to Johnson & Johnson's 6.1%. It's hard to choose a winner with these mixed results, so let's have a look at the sustainability of their policies.

One way to estimate a company's ability to steadily increase distributions involves looking at the percentage of net income it pays out as dividends, or the payout ratio. 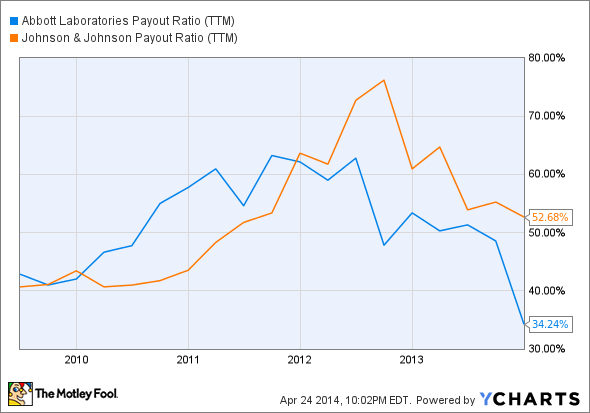 While the two have crossed paths, Abbott's payout ratio of just 34.2% following the AbbVie spinoff gives it the lead in this event. The low payout ratio could mean the company is taking advantage of investment opportunities; it could also mean that some larger dividend increases or share buybacks are in the pipeline.

Growth drivers
Nutrition is Abbott's largest operating segment by sales. A year ago it was also the company's fastest growing as Q1 2013 international nutrition sales increased 14.8% year over year. A supplier recall last August disrupted sales, but it looks like Abbott has recovered much of the market. First quarter 2014 nutrition sales of $1.63 billion came in just 1.7% lower than Q1 2013 on an operating basis. I would be surprised if the effects of the supplier recall continue much longer. Branded nutritional products like Similac and Ensure have provided Abbott with a dependable revenue stream for decades.

Johnson & Johnson's pharmaceutical segment is currently performing well, but could be less reliable over the long term, as patents will expire and revenue streams dry up. Consumer goods, medical devices and diagnostics still comprise about 60% of the company's total sales, and provide a great deal of stability. Unfortunately, they're not growing very fast. Combined first quarter revenue from the segments rose slightly on year, but unfavorable currency fluctuations resulted in 1.1% loss.

Looking ahead
Abbott expects 2014 earnings per share to fall about 28% to $1.18 at the midpoint. That figure deducts tax expense for repatriating ex-US earnings, cost reduction charges, and other "specified items" expected to total about $1.03 per share this year.

Unlike Abbott, earnings growth at Johnson & Johnson is positive no matter how you look at it. Midpoints for the company's full year guidance put top and bottom line growth at 5.5% and 6% respectively. That's just incredible for a company with sales of over $70 billion per year. Johnson & Johnson easily takes this round.

Further ahead
Last month Abbott's Supera peripheral stent won FDA approval for treatment of arterial blockages in the upper leg. The device is already approved in the EU. Abbott estimates peripheral artery disease (PAD) affects between 12% and 20% of Americans over the age of 65. The market is likely to grow along with rising obesity and diabetes rates, both of which are factors that may contribute to PAD.

The peripheral stent is likely to encounter competition from Medtronic's (NYSE: MDT) Complete SE. The self-expanding stent won approval for upper-leg arterial blockages last September. Abbott has an enviable position in the PAD market, but Medtronic's endovascular sales of $218 million during its most recent quarter overshadows Abbott's $121 million.

Johnson & Johnson's recent launches look like they could drive growth much further than Abbott's. Hepatitis C treatment Olysio sales reached $354 million in the first quarter. Its use in combination with Gilead Sciences' blockbuster Sovaldi has reportedly been a huge boost. Unfortunately that boost is likely to fizzle if Gilead wins approval for its new single pill combination of Sovaldi and ledipasvir, which could happen as soon as October.

What a Fool prefers
When choosing the better buy here it all depends on your personal preference. If you're looking for better than average growth and don't mind the uncertainty that comes with pharmaceutical companies, Johnson & Johnson is clearly the better buy. For the next several years Abbott is likely to grow much slower, but you'll never fret over a patent cliff. To me that security makes all the difference, which is why I think Abbott is the better buy.

Abbott Laboratories or Johnson & Johnson: Which Dividend Aristocrat is a Better Buy? @themotleyfool #stocks $JNJ $ABT Next Article
Current