The Dow Jones Industrial Average (DJINDICES:^DJI) got off to a rocky start in 2014, but has recently bounced back to set fresh record highs again. However, Visa (NYSE:V), Pfizer (NYSE:PFE), and IBM (NYSE:IBM) didn't get the memo -- these three Dow members are still trading down year to date.

What's wrong with these three Dow laggards? Are they due (or maybe even overdue) for a rebound? 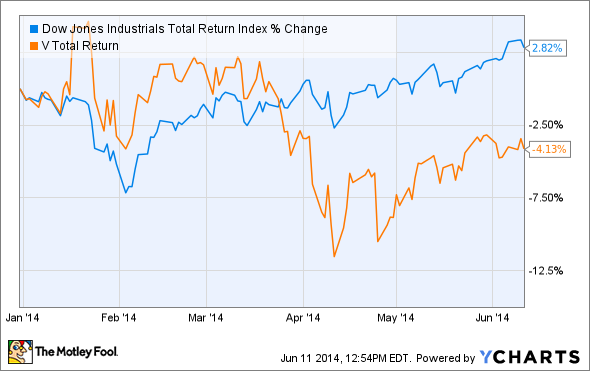 Wal-Mart is seeking $5 billion in damages, alleging that Visa's transaction fees are unfair. There's a history of similar lawsuits leading to billion-dollar settlements, so Wal-Mart's attack is a risk that Visa investors shouldn't take lightly.

The pain continued in April, when Visa delivered solid results in the second quarter but issued soft revenue guidance for the rest of the year.

The company worried about a strengthening U.S. dollar, which is bad news for a business that collects 46% of its annual revenue from international markets. Moreover, Visa threatened to cut ties with two major Russian banks as the tension in Ukraine boiled over.

Has anything changed to improve Visa's position today?

Well, Russia has backed off Ukraine a little bit. Visa ended up blocking those Russian banks from its network, but it might reinstate these relationships soon enough. That's a start, but hardly a guarantee of near-term growth.

In the long run, Visa and other credit card giants are working to overhaul the way we make payments. Credit cards as we know them will soon be obsolete, replaced by chip-enhanced models to increase security and maybe even dropped from your wallet altogether.

That's a very long-term play, though. There's nothing on the table right now that points to Visa gaining the upper hand on the Dow anytime soon. The company can still surprise us all with a dividend increase or new developments in Russia, but don't bet your house on it. 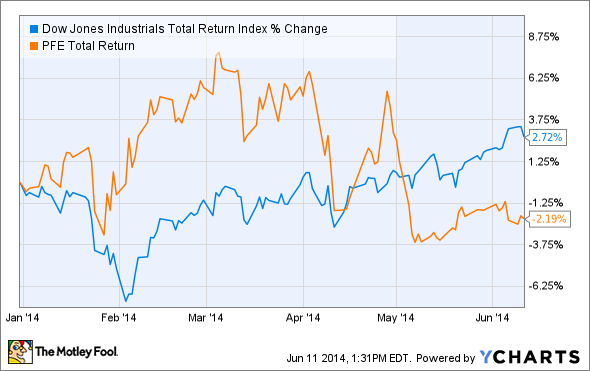 Pharma giant Pfizer missed revenue estimates in the first quarter, and followed up with a failed $106 billion bid to buy British rival AstraZeneca.

On the upside, Pfizer is already looking for other acquisition targets. The company needs to bulk up its development pipeline, and buyouts provide a relatively smooth alternative to starting risky projects in-house. AstraZeneca turned out to be an overwhelmingly big bite, but there's no shortage of smaller targets with promising drug projects.

I would be downright shocked if the year ends before Pfizer launches another takeover campaign. There's no guarantee that investors will take it as a positive catalyst, but this is the way forward for the long run. Like Visa, Pfizer is running a bit short on quick fixes and might not beat the Dow in 2014 -- but again, serious investors should take the long view anyhow. 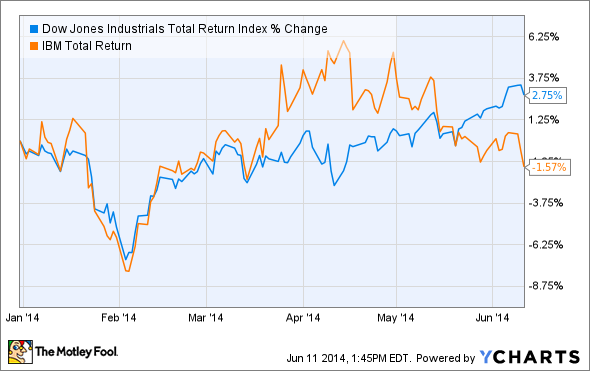 Finally, IBM held its annual investor day in the middle of May. That was Big Blue's best chance to convince investors that its large-scale strategy shift is working, and that this turnaround story is about to pay off.

But IBM failed to deliver these promises.

The hardware division is falling faster than investors and analysts had hoped. IBM's cloud-based software strategy isn't immediately making up the difference. Once again, we're looking at short-term concerns that overshadow the potential for long-term wins.

I would argue that IBM is the best turnaround play available on the Dow today -- but you do need to bring some patience to the game. IBM's new strategy is likely to bring strong growth and big stock returns in the next five years, but there's no short-term play to be made here.

In the end, all three of these Dow laggards seem likely to get back on their feet in the long run. But all three could very well stay below the Dow's returns for the rest of 2014. Patience is a virtue, dear Fool.