It's no secret that IBM (NYSE:IBM) has left investors hurting recently. Since the company missed estimates and painted a bleak guidance picture in spring 2013, its shares have lagged far behind their Dow Jones (DJINDICES:^DJI) peers. 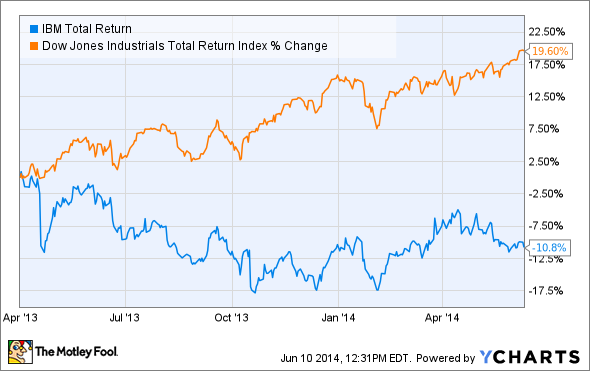 Is it time to give up on Big Blue? Or does CEO Ginni Rometty have a solid turnaround in store for patient investors?

Big Blue publishes long-term strategy directions, and measures its performance against these stated goals. Crazy, I know, but this open hand hasn't stopped IBM from winning in the long term. 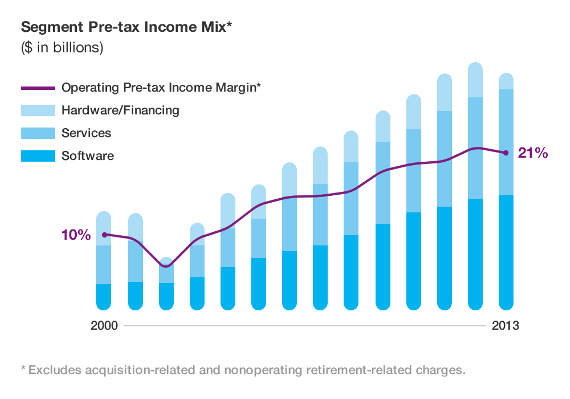 Above all else, IBM takes pride in its ability to "remix" its businesses. The growth you see in the chart above did not come from holding on to established markets for dear life, but from dropping underperformers to refocus on new growth opportunities.

Ten years ago, IBM's profit driver was an even blend of hardware, software, and services. Today, the low-margin hardware division is falling by the wayside as IBM pursues software and services with a single-minded passion. 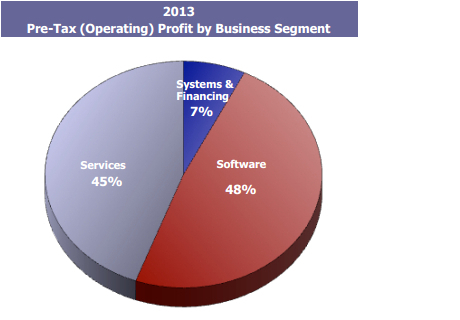 In particular, IBM is building a portfolio of enterprise-class services on cloud-based platforms.

By the end of 2013, Big Blue had already spent $7 billion on research and investments in the cloud-computing market. The company holds more than 1,500 patents in this area, including research brought aboard in 15 cloud-focused acquisitions.

Forget the tried-and-true but also outdated one-stop shop idea. This is what IBM is doing now. Big Blue doesn't want to be the entire information technology sky anymore. It's all about the clouds.

It's a strong strategy with all kinds of long-term growth promise. But strategy changes can hurt, and this is no exception.

IBM remains committed to a five-year plan that always pointed to $20 of operating earnings per share in 2015. Last year, the company delivered operating EPS of $16.28, leaving a rather large gap to cover in the last two years. IBM is guiding to $17.80 in 2014 earnings, which would be a 9% annual jump. The remaining distance to cover in 2015, then, is a tough 12% earnings increase.

I'm confident that IBM will meet the $20 long-term target, but perhaps not in the most sustainable way.

Some analysts complain about IBM's "low-quality" earnings, and it's easy to see why. Between 2000 and 2013, the company collected $165 billion in free cash flow. It spent $32 billion on acquisitions, $30 billion on cutting dividend checks, and $59 billion for capital expenses. But IBM also funneled a staggering $108 billion into share buybacks.

Measuring these 14 years of ultragenerous buybacks against IBM's $186 billion market cap, you'll find the company has reduced its share count by 44%. Sometimes Big Blue had to borrow money to keep retiring shares -- and did it happily. The ever-shrinking share count has most certainly helped IBM meet its earnings goals. Not necessarily by making more money, but by moving the goal posts. 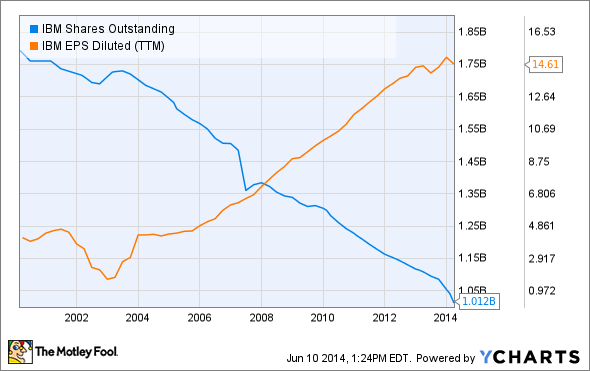 In the end, IBM investors must weigh Big Blue's flexibility against the potential for bottom-line trickery.

I'm convinced that IBM has chosen the right path toward long-term profits. My my, hey hey, cloud computing is here to stay, as Neil Young might put it.

But the big payoff might come a little too late to meet IBM's stated 2015 goal. That's why I wouldn't be surprised to see another massive buyback push, possibly powered by the current economy's large supply of low-interest debt.

If that scares you, feel free to stay away from IBM. Personally, I prefer to take the long view. Come back in five years, and I believe that Rometty's strategy will have played out as planned. This is a hardscrabble turnaround in the making.

I don't have a real-money position in IBM (yet!), but my CAPS portfolio will most certainly ride this turnaround for the next several years.