Tesla Motors Inc.'s (NASDAQ:TSLA) stock market gains have been nothing short of impressive, though the young electric-car maker faces many hurdles in its quest for mainstream adoption of electric vehicles. One factor holding the company back is the lack of charging infrastructure, which would enable electric vehicle drivers to make long distance trips with ease. Thus far, it's been a challenge that Tesla has been tackling on its own. After Tesla's recent announcement about releasing its patents, it may not be facing the problem single-handedly for much longer.

Driving solo
Even on its own, Tesla is set to make a substantial increase in the number of charging stations in America, and sooner rather than later. In the images below, compare the number of Tesla's Supercharger stations currently to the amount it plans have operating in 2015. 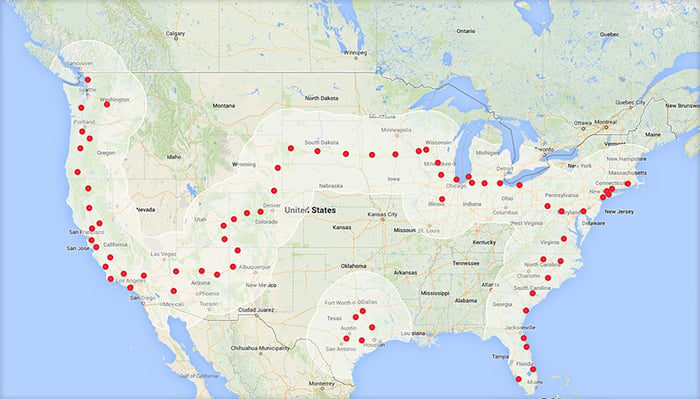 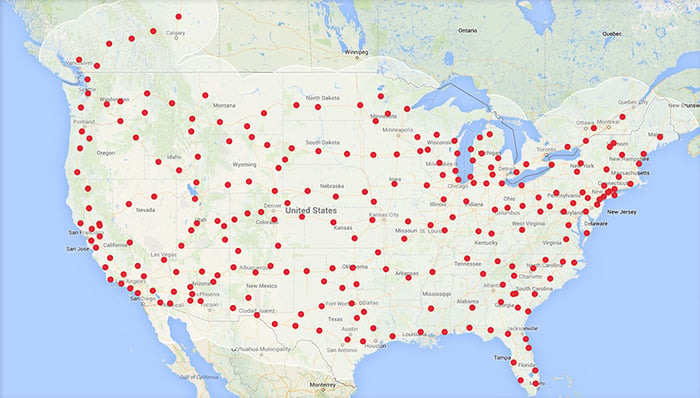 Supercharger stations planned to be open in 2015. Source: Tesla Motors.

Tesla has previously mentioned that it is very open to allowing competing automakers' electric vehicles to use Tesla's Supercharger stations. Consider that now three automakers -- Tesla, BMW, and Nissan -- together produce roughly 80% of electric vehicles and each uses different charger applications.

By allowing other automakers' electric vehicles to use its Supercharger stations, the company can help avoid a problematic scenario where individual automakers have their own unique charging stations. Imagine if different automakers could only fuel up at specific gas stations -- what a headache that would be!

In addition to avoiding that scenario, if an alliance of sorts were to develop it could significantly accelerate the progress of Tesla's infrastructure build-out by splitting the cost between multiple automakers. A partnership would likely lead to more Supercharger stations, built at a faster pace. That would in turn lead to faster mainstream adoption of electric vehicles and provide a significant boost to Tesla's stock.

Unfortunately, a partnership has failed to materialize thus far. But Tesla's recent announcement could change that.

Patents set free
Thus far the biggest hurdle to finding automakers able to share the burden of building out the Supercharger infrastructure has been that no other type of electric vehicle can take a charge near 135kw, which is the power level of Tesla's Supercharger stations.

As the dust settles from Tesla's decision to release its patents to the world, BMW and Nissan are already rumored to be interested in collaborating with Tesla on charging technology. These talks could lead to an alliance that would give Tesla a partner, or two, in the task of expanding its Supercharger network enough to power a mainstream driving audience.

Also, Tesla could also ask companies to share some of their patent information with it in exchange. Though it's unclear what benefit that could have for Tesla, as a potential investor, I would be very confident in CEO Elon Musk's ability to find and use strategic competing patents to significant advantage.

Early innings
It's still very early in the grand scheme of Tesla's goal to change the way Americans "fuel" up. Tesla has 97 Supercharger stations in North America, 14 in Europe, and a couple in China. Releasing its patents and potentially luring a partner to help expand its network at a fraction of the cost, and at a faster pace, would be a positive catalyst for its stock price and long-term goals -- and this article is only covering one potential implication of the patent release decision.

Make no mistake, as far as long-term plans go, Tesla's ambition to change the way the world drives is on the right track. The ball is clearly rolling, and it may just be a matter of time before EVs are adopted widely. The recent release of Tesla's patents may be just what the company needs to put that ambition in the fast lane.