"The only thing that gives me pleasure is to see my dividend coming in." -- John D. Rockefeller.

While most of us, hopefully, can find something besides dividends that gives us pleasure, they remain a great way for your portfolio to generate cash. Owning shares of a dividend-paying company ensures you a slice of the profits each quarter and, better yet, you don't have to sell anything to realize the cash gain. A more lucrative scenario for investors is when a company offers a solid dividend yield and has a ton of upside remaining in its stock price. America's second-largest automaker, Ford Motor Company (NYSE:F), seems to fit the bill perfectly.

Dividend details
Looking at the details, Ford's dividend pays out $0.125 per share quarterly for a total of $0.50 per share annually. That's roughly a yield of 3%, which compares favorably to Toyota's (NYSE:TM) and Honda's (NYSE:HMC) respective yields of roughly 2.1% and 1.1%. Furthermore, Ford's dividend payout ratio is only about 30% of net income currently, which leaves room for additional dividend increases, especially as Ford grows its income.

Here's why Ford's stock price, as well as its dividend potential, has upside in the years ahead.

What have you done for me lately?
Ford has come a long way since the depths of the most recent recession. Consider that between 2006-2008 the folks at the Blue Oval were burning cash by the truckload, losing more than $30 billion total in those years. Fast-forward a few years after CEO Alan Mulally established his "One Ford" plan and the automaker posted one of its most profitable years ever in 2013 and has earned more than $33 billion over the last four years – quite an impressive swing.

But the story is far from over.

This year could bring investors a chance to buy into Ford's continuing turnaround story as profits are expected to take a slight hit, which could send the stock lower, while the company embarks on its most aggressive vehicle launch schedule in history. Ford expects to launch 16 new vehicles in North America this year including the company's most profitable product, the F-Series pickup truck. The aggressive launch schedule isn't limited to the U.S. either; Ford expects to double its vehicle launches globally this year, compared to 2013.

While new vehicle launches inflate costs for automakers in the short-term, as production lines are adjusted and marketing is accelerated, the benefits heavily outweigh the cost in the long term. New vehicles typically command a higher average transaction price and require far less incentive spending to sell -- a much more profitable scenario.

International upside is key
One knock against Ford is the company's dependence on North America for much of its global revenue, and the vast majority of its overall profits. The upside with owning Ford right now is that its aggressive expansion in key markets across the globe will drive incremental revenue and profits. 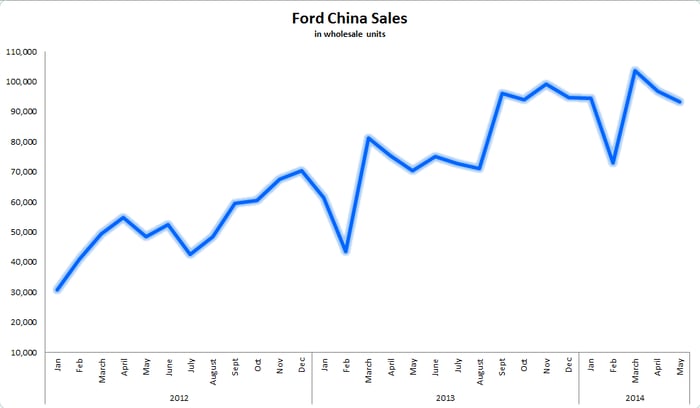 Ford placed a big bet on China, pouring billions of dollars into its operations, and it's already starting to pay off. In less than three years Ford has managed to triple its sales in China and is on schedule to double its market share to 6% by the end of next year (from 3% in 2012). Ford has already passed its Japanese rivals, Toyota and Honda, in China's sales ranking to become the fifth-best-selling foreign automaker in the country and is on pace to overtake Nissan during the next year. Ford projects that its Asia Pacific region, which mostly entails business in China, will generate 40% of company revenue by the end of the decade, compared to only 8% currently.

In other overseas news, Ford has cut costs and improved its operations in Europe significantly. The result has been a gradual reduction in European losses and management expects to break even, or turn a profit, by the end of next year. That's a huge win for investors that have watched Ford burn through $3.4 billion in Europe over the past eight quarters. 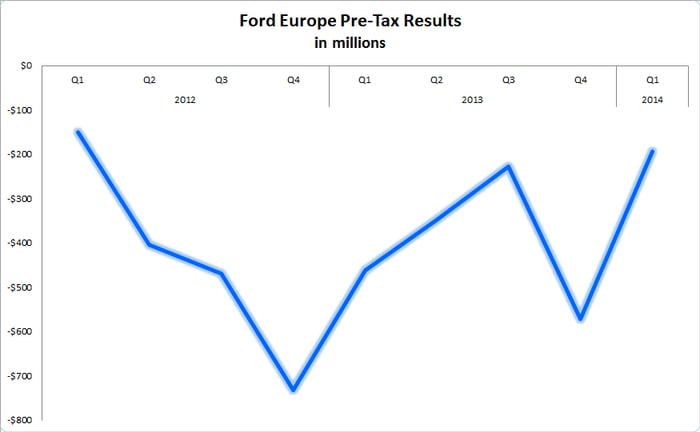 Ford's $194 million pre-tax loss last quarter was less than half of its comparable result in 2013 and its operating margin improved by 400 basis points. Despite a continuing gloomy market in Europe, Ford managed to grow its revenue 18% and investors can expect revenues, margins, and profitability to improve as new vehicles continue to roll out.

Bottom line
As Ford continues to make progress growing its top-line revenues from key markets, such as China, as well as recovering its bottom line losses from Europe, it will open the door for many more dividend increases in the years ahead. As those factors take place it should help kick Ford's stock price out of the neutral position it has been stuck in over the last twelve months

The great thing about Ford's dividend is that the company is writing investors quarterly checks while they wait for its upside to materialize; maybe that Rockefeller guy was on to something, after all.