Red Hat has been investing heavily in open cloud infrastructure technologies, including an acquisition in the first quarter. Will this pay off for the company down the line?

Open-source provider Red Hat (RHT) reported results for its first quarter in June. The company is doing well, including revenue of $424 million, $9 million above the high end of its own guidance, and a 17% increase, year over year. However, the big news within Red Hat is the continuing investment in OpenStack, an open-source cloud infrastructure that allows companies to build their own version of a cloud like Amazon.com's AWS or Microsoft's Azure. What has Red Hat been doing on the cloud infrastructure front, and will it pay off for the company down the line?

Acquisitions
In June, Red Hat announced its intention to acquire OpenStack expert eNovance, which provides cloud infrastructure services for enterprises and service providers. Red Hat will pay approximately 50 million euros in cash and 20 million euros in Red Hat shares for eNovance, and the deal is expected to close in the coming weeks.

Red Hat is in the early stages of engagement on OpenStack with many enterprise customers. However, management has stated that a lack of qualified OpenStack professionals has been holding back the number of proof-of-concept projects that Red Hat has been able to initiate with customers. With its acquisition of eNovance, Red Hat will get a 110 person team, 60-70 of whom have consulting skills to help Red Hat scale out its OpenStack business.

Profit or loss
Over the last year, thanks to increased R&D and sales costs related to OpenStack, operating expenses have outpaced revenue at Red Hat. As a result, EPS is down by $0.01 year over year in the first quarter. When asked about this trend on the earnings conference call, management effectively said they would be crazy not to step up investment given the size of the opportunity. 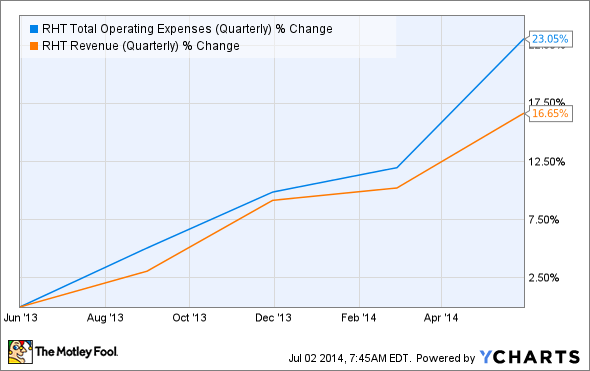 Red Hat has previously warned that revenue from its cloud initiatives will remain light in 2014. In the first quarter, Red Hat's emerging technology products, which also include its middleware offerings, accounted for only 13% of the company's revenue. It might take a year or more for customers to start buying regular subscriptions for Red Hat's flavor of OpenStack, but until then, the smaller proof-of-concept projects will contribute to training and services revenue. It's worth keeping an eye on these numbers, because an increase in services might indicate more significant growth down the line.

How big is this opportunity?
Red Hat CEO Jim Whitehurst has stated that he has seen more interest in OpenStack than in any other Red Hat product since Linux, which contributed $315 million in subscription revenue to the company in the first quarter. Gartner expects that by 2017, nearly half of large enterprises will deploy a combination of a private and a public cloud, known as a hybrid cloud. The security concerns following the NSA leaks have driven a lot of interest in this approach, and consequently in OpenStack, which is the major open-source, non-proprietary way for enterprises to build their own private cloud.

A sign of the interest in OpenStack is that even a nominal competitor such as VMware (VMW 1.54%) is getting involved. VMware sells its own proprietary cloud infrastructure, and at the time that it joined the OpenStack Foundation, existing members raised concerns that VMware is looking to subdue OpenStack from the inside. However, given VMware's serious level of contribution to the OpenStack project since that time, it seems that a more likely reason is that the virtualization giant sees the potential in OpenStack and doesn't want to be left out as OpenStack continues to grow and spread.

In conclusion
Red Hat's revenue grew an impressive 17% in the first quarter, compared to last year. However, operating costs increased at an even greater pace, due to the company's continued investment in the open-source cloud infrastructure OpenStack. Management believes this opportunity is too good to pass up, and judging by the level of industrywide interest, they are probably right.