The Dogs of the Dow strategy has many fans in the investing world. And there are some good reasons for that popularity. For one, by focusing on a single financial metric -- dividend yield -- it is one of the easiest stock plans to apply. And it can't hurt that the strategy often beats the market: Last year it trounced the Dow Jones Industrial Average (DJINDICES:^DJI) by 8 percentage points.

The Dogs of the Dow strategy is as simple as it gets: Buy the index members that boast the highest dividend yields. Because high yields tend to correlate with lower stock prices, you should be rewarded over time by owning a basket of blue chips that were closer to the bottom of their business cycles than to the top, and are primed for a rebound. At the very least, investors collect market-thumping dividend income by using this strategy. The average yield of the 10 Dow dogs for 2014 was 3.6% -- about 1 percentage point above what you could get from 10-year Treasury bonds.

With that in mind, let's look at the two Dow dogs that have posted the biggest stock-price gains so far in 2014: Intel (NASDAQ:INTC) and Merck (NYSE:MRK).

The undead PC
Up 20% through June, Intel is the Dow's second-best performer year to date. 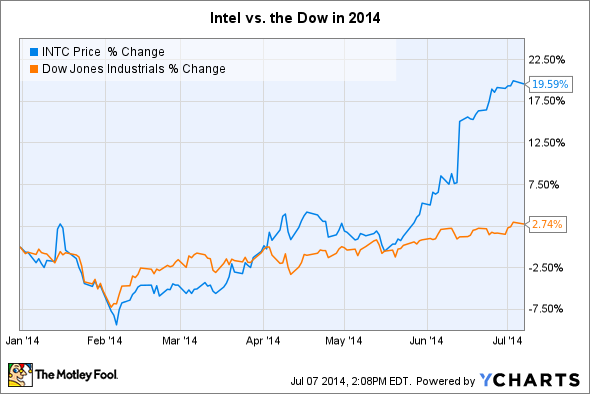 That 17-percentage-point lead over the market owes to a turnaround in the tech giant's business. The past few years have been rough for Intel, with sales and profits slipping as PC sales volumes and prices both fell. But things look a lot brighter for the chipmaker these days: Thanks to a rebound in business PC sales, Intel last month boosted its revenue and profitability outlook for the year. The company now expects both of those figures to improve for the first time since 2010. Consequently, Intel's story looks like a textbook example of how the Dogs of the Dow strategy can work for investors: Its business really was near a turning point as the company's dividend yield marched toward 4%. 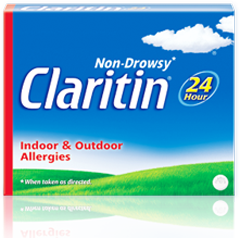 A streamlined drugmaker
Merck is the Dow's third-biggest winner in 2014, posting an 18% jump year to date. But the stock's gain isn't due to any big turnaround in the drugmaker's business. In fact, last quarter Merck posted another 4% drop in sales. And yet the stock continues to rise as investors applaud the company's cost cuts and increasing cash returns to shareholders. Merck is in the middle of a huge restructuring program that has already sliced 3,000 positions from its workforce, with about 5,000 left to go. The financial benefits of that move and other reductions are already showing up in Merck's bottom line. For example, administrative expenses fell by 8% last quarter, or double the pace that revenue shrank.

Merck also took a huge step toward streamlining its business when it announced in May that it would sell off its consumer care portfolio. The sale means that Merck loses popular brands including Afrin, Coppertone, and Claritin, but gains a leaner operation with more focus on core pharmaceutical products that have the largest long-term potential. Meanwhile, investors have to like that Merck will net $9 billion in cash from the deal, which it can use to fund further payout hikes and share repurchases.

Foolish final thoughts
Investors who bought Intel and Merck for their outsized dividends have enjoyed a bonus in the form of solid share-price gains in 2014. Of course, that doesn't mean the Dogs of the Dow strategy will work out so well in all, or even most, cases. Still, for investors seeking above-average dividend income and a decent shot at capital appreciation, the highest-yielding members of the Dow can be a great place to start your search.