It seems that today's headlines are chock-full of two kinds of articles: those that proclaim that greenhouse gas emissions are the greatest threat to mankind and those that celebrate how America's shale oil and gas boom is smashing records.

In fact, according to Bank of America and the International Energy Agency, as of June the US is the largest producer of oil and natural gas liquids in the world.

That impressive feat was accomplished thanks to an explosion in shale oil and gas production from states such as Texas and North Dakota. For example from 2010 through 2013 these states increased their oil production by 117% and 177% respectively and now make up almost half of all US production.

However, not all is sunshine and rainbows when it comes to shale oil and gas production. The sad truth is that, though prolific, shale wells often face catastrophically high depletion rates. For example Devon Energy, a major producer in Texas's Eagle Ford shale, has reported first-year production decline rates as high as 90%. These high depletion rates result in recovery rates for shale oil of just 5%-10%. CO2 injection can increase that as much as three-fold, to 15.1%.

Then there is the fact that even traditional oil wells are inefficient at extracting the oil they have in place. For example, typically just 20% of oil is extracted in the primary recovery phase. However, enhanced oil recovery (EOR) techniques such as water flooding and CO2 injection, can increase that to 55%. 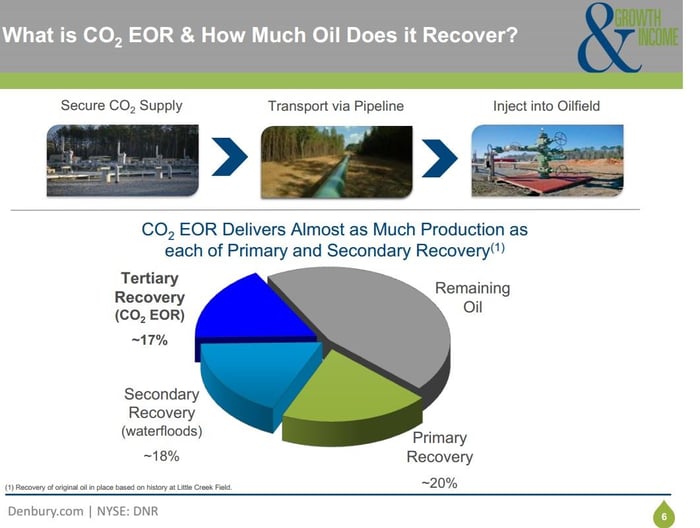 Immense challenges equal immense opportunity
Since primary oil recovery leaves nearly 80% of oil in place, this means that the world's older fields are potentially black gold mines just waiting for EOR technology to revive their production. For example, if the world's oil companies could raise the percentage of oil they can extract by just 1%, it would increase the world's oil reserves by 88 billion barrels. To put that in perspective, that's enough oil to supply the earth's needs for nearly three years.

First, if we can revive older wells, then there is less pressing need to drill for new wells in harder to reach and potentially more environmentally fragile areas such as the Arctic National Wildlife Refuge (ANWR), a longtime political hot potato.

What Mrs. Greenwald is referring to is trapping CO2 deep within the earth, where it can be permanently kept out of the atmosphere. 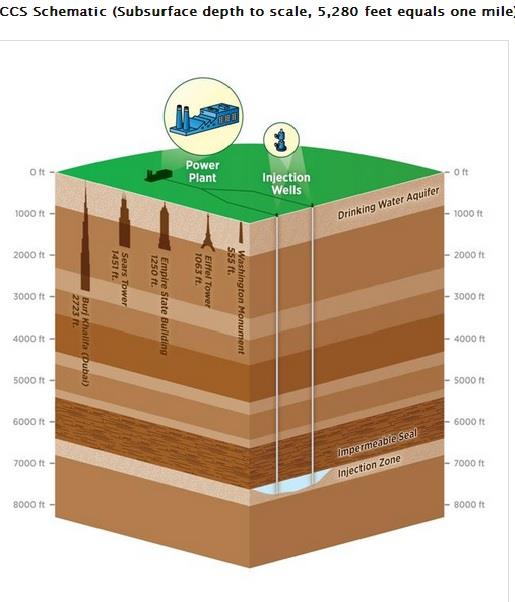 This diagram illustrates the third way that EOR can help the environment, by pairing pollution sources such as coal-fired power plants with CO2 injection into oil wells.

According to the EPA, the average 500 MW coal fired power plant produces 3 million tons of CO2 annually. Being able to sequester that carbon would be the equivalent to planting 62 million trees or turning off the power for 300,000 homes.

In the US there are 120 facilities already using carbon capture and sequestration (CCS) technology. Soon to be added to that tally is utility NRG Energy, which is investing $1 billion in a CCS project for one of its coal fired power plants in Texas. The company is hoping that it will be able to offset the cost of the project by selling the CO2 to nearby EOR projects.

If NRG's experiment proves successful then it could generate a paradigm shift in which coal-fired power plants are converted en masse to CCS and the CO2 captured could be used for EOR and sequestration.

Given that the US Department of Energy estimates the US has 1,800 billion to 20,000 billion metric tons of CO2 sequestration capacity (in the form of salt domes, unmineable coal deposits, and oil and gas reservoirs), we might be able to sequester thousands of years' worth of US CO2 emissions.

Keeping that much CO2 out of the atmosphere would be a boon for preventing global warming. The fact that it can be accomplished in ways that also grow the economy and create lots of high-paying jobs in the process should be celebrated by everyone -- no matter what side of the political fence you stand on.

Foolish takeaway
Enhanced oil recovery, specifically in the form of CO2 injection, represents a major environmental and economic opportunity for the world. It's a way to sequester carbon, which helps mitigate the largest downside of oil production while fueling economic growth and potentially lowering gas prices. In other words, CO2 injection represents a win-win situation for both environmentalists and the oil industry -- a rare thing indeed in today's politically charged climate.