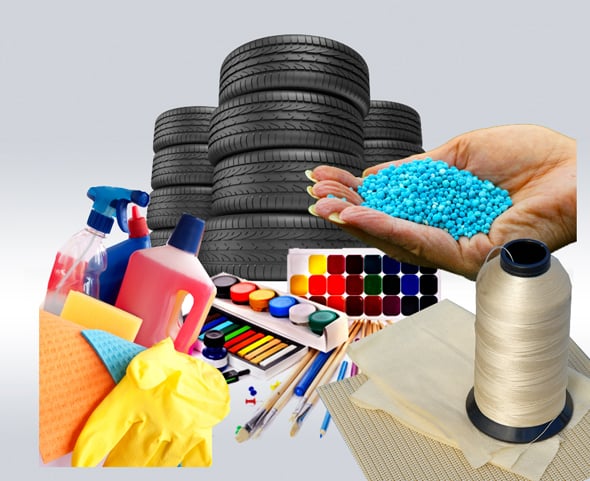 Cheap feedstocks for petrochem are just one tailwind for this energy giant. Source: Phillips 66.

Earlier this week I wrote an article pointing out three things that could send Phillips 66's (NYSE:PSX) stock down. As noted in that article, the energy giant has a lot going for it, too, and it's always necessary to look at both the bull and bear case for any company before investing. So here are three things that are definitely in Phillips 66's favor.

1. Cheap domestic oil and natural gas feeding global demand
On the surface it might not seem like cheap oil or gas is good for a company like Phillips 66, but low prices are a boon here thanks to the company's large refining and petrochemical manufacturing operations. Combined, these two segments accounted for $2.8 billion in net income in 2013 -- more than 75% of the company's profit.

Phillips 66 is one of the largest refiners in the U.S., which is both good and bad. The bad part -- as was discussed in the bear case -- is that domestic consumption of distillates such as gas and diesel faces serious headwinds to growth. However, exports of distillates and processed natural gas liquids and refinery gases are on the rise: 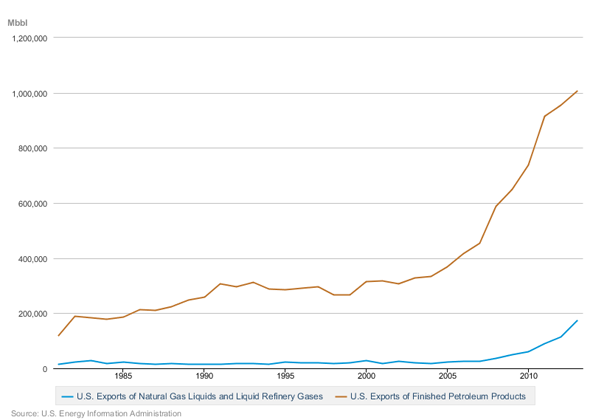 This is being driven by growth in global demand, corresponding to cheap, plentiful domestic resources.

2. Cheap input costs driving petrochemical business
Energy and feedstocks are two of the most expensive parts of Phillips 66's petrochemical business, CPChem, a 50-50 joint venture with Chevron (NYSE:CVX). Olefins and polyolefins -- largely produced from natural gas liquids such as ethane -- make up about two-thirds of CPChem's sales. The domestic cost advantage for ethane, which is used to produce ethylene, is enormous. Historically, ethylene production was cheapest using Middle East feedstock, primarily from Saudi Arabia. However, the tables have turned, and domestic ethylene is more than 30% cheaper than the Saudi product and a whopping 80% less than in Asia: As you can see, this cost advantage is substantial and is driving significant investment by CPChem into domestic expansion. So far in 2014, it has broken ground on at least three new manufacturing expansions in the U.S., which will lead to significant growth in the joint venture's capacity to produce 1-hexene, polyethylene, and natural gas liquids, all of which serve as both feedstocks in production of finished plastics and other goods it makes and sells, as well as products it sells to other chemical companies.

3. Management returning capital to shareholders
Since the company's spinoff from ConocoPhillips in 2012, management has already reduced shares outstanding by 10%, while more than doubling the dividend payout: 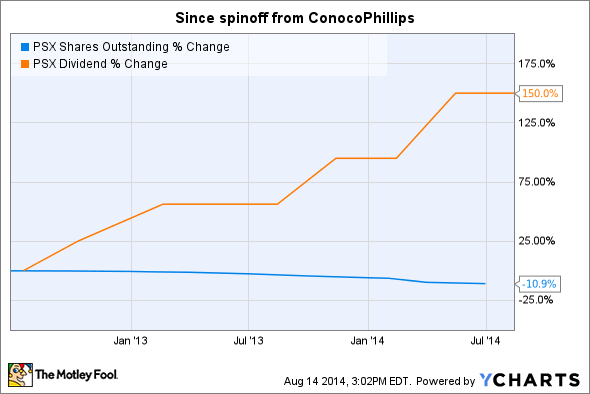 Furthermore, management has said it plans to increase the payout rate by 10% annually, while continuing to repurchase shares. The stock price has increased 161% in response to management's moves dating to the spinoff.

While share buybacks aren't always good for investors if not handled correctly, having clear capital return goals for a cash-generating business like this will help keep management focused. Phillips 66 is a relatively mature business, making it harder to grow in real terms, so focusing on per-share value makes a lot of sense.

Final thoughts: Look at both sides of the coin
I'm relatively bullish on Phillips 66 -- the reasons above create strong tailwinds for its business, and management seems quite focused on per-share value creation. Combined, these make the company look like a no-brainer. However, it's still worth exploring -- and understanding -- the bear case as outlined in my previous article.

Remember: It's not so much about what will happen as it is about the probabilities. Consider the risks and the potential, and build out your portfolio accordingly.