Deere's (NYSE:DE) share price has struggled in the last couple years and is now almost flat from where it was in 2011. Essentially, Deere hasn't participated in the broader market rally because investors have been pricing in the effect of declining crop prices on demand for its agricultural equipment. In issuing its third-quarter results, Deere management downgraded expectations for equipment sales and net income for the full year. With that said, there are three key reasons why the stock could outperform going forward.

This article will focus on outlining the upside potential for Deere. For some background, Fools can find out more about Deere's recent results here, and read about the five key takeaways from the company's earnings conference call here.

Conditions are likely to get tougher in the near term for Deere, as the company and the U.S. Department of Agriculture have both lowered expectations for future key crop prices. Lower crop prices (principally for goods such as soybeans, cotton, corn, and wheat) affect farmers' income and therefore their willingness to pay for agricultural machinery.

The consensus may be wrong
Simply put, the single biggest driver of Deere's stock price is key crop prices, such as corn and wheat. In fact, the agriculture and turf made up more than 80% of revenue in the first nine months of Deere's fiscal year, and the following chart demonstrates the relationship between crop prices and Deere. 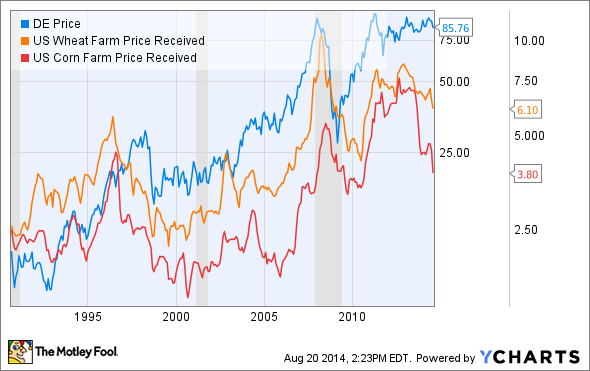 With that said, the consensus opinion (including the USDA and Deere's management) is that crop prices will be lower in 2014 & 2015, but ultimately who knows? Who can ultimately predict what the weather will be like?

Indeed, as Deere's management asked itself on the conference call (see link above), " do you have yet a third year in a row of good growing conditions on a global basis, or do you have a year where those yields moderate a bit due to weather?"

The point is that the market is merrily pricing in favorable crop growing conditions (which would create a lot of supply and reduce crop prices). However, bad crop growing weather could create considerable upside for prices, and if that happens then Deere will soar. In effect, you are getting a 'bet' on bad weather, but at favorable odds. Value investors love such scenarios.

It's not quite 2008
The second reason for optimism about Deere stock is that the market appears to be undervaluing the company, based on its perception of risk. The following chart demonstrates the issue. I've used enterprise value (market cap plus debt), or EV, over earnings before interest, tax, depreciation, and amortization, or EBITDA, as my principal valuation method.

It's a busy chart, but investors should note that Deere's current EV/EBITDA ratio (yellow line) is a lot lower than before the last recession. In fact, it's not that far above the trough in 2009 (yellow line) when the market anticipated the collapse in EBITDA (red line). On this basis, the current EV/EBITDA does not make Deere look particularly expensive. 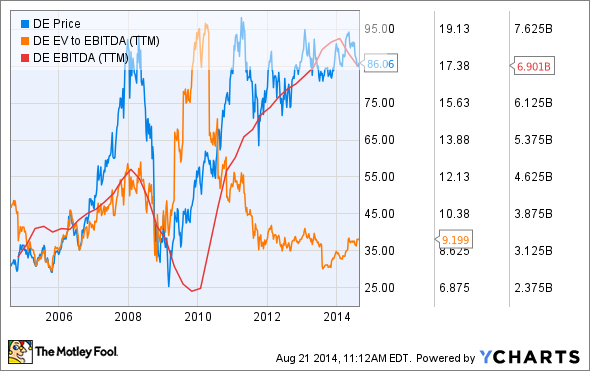 Moreover, conditions are different from 2008. First, the same hedge fund speculative fervor does not appear to be built into commodity prices, so the fall in crop prices might not be so dramatic. Second, the last recession was about credit, and farmers found it hard to get financing to buy equipment. Indeed, Deere's own financial services arm recently reported that its provision for credit losses (a good credit quality indicator) was at a minuscule 0.1%.

China is under increasing pressure to ensure self-sufficiency in food as increasing urbanization and economic growth is creating a burgeoning middle class that is hungry for protein. Fools already know about Deere's exposure to China from an article linked here.

The takeaway
Deere's near-term prospects don't look great, but sometimes that is the best time to buy the stock. No one really knows what the weather will be, market conditions are not the same as they were in 2008, and emerging economies, like China, are keen on increasing farming subsidies. For these three reasons, Deere could be a stock to buy.