The merger and acquisition game being played out across the healthcare sector this year has largely remained amicable. The clear exception has been the tumultuous attempted buyout of Irvine, Calif.-based Botox maker Allergan (NYSE: AGN) by Valeant Pharmaceuticals (NYSE:BHC) and its activist hedge fund backers, including Pershing Square Capital Management.

On Aug. 1, Allergan's management filed a lawsuit in the U.S. District Court for the Central District of California in an attempt to block Valeant, Pershing Square, and their affiliates from voting at a special shareholder meeting scheduled for Dec. 18. Valeant and Pershing Square have been pushing for this meeting for months in order to potentially remove many of Allergan's current board members opposing the takeover.

This special shareholder meeting is setting up the likely endgame in this adversarial process. Given that the end appears near, let's consider three pivotal questions Allergan shareholders should be asking themselves ahead of this meeting.

Is Valeant's offer inadequate?
In June, Allergan's management formally responded to Valeant's acquisition offer, saying that "the Offer is grossly inadequate, substantially undervalues Allergan, creates significant risks and uncertainties for Allergan stockholders and is not in the best interests of Allergan and its stockholders." When the initial offer of $46 billion was announced on April 22, however, it was roughly 50% higher than the company's valuation at the time. Viewed this way, Allergan's brass were either wrong in its outlook or the market was seriously discounting the company's forward-looking prospects.

Looking at Allergan's fundamentals and growth prospects, I think there are good reasons to accept management's viewpoint. Due to strong top-line growth from Botox and other key products and an improving bottom-line resulting from an ongoing restructuring process, Allergan is now projected to grow its earnings per share by a whopping 42% next year. As a result, the company's forward price-to-earnings ratio has fallen below 20 -- even after shares jumped 48% year to date following Valeant's bid offer becoming public in April.

My view is that a fair offer for Allergan would be closer to $66 billion based on an average sectorwide multiple of approximately 25. In short, Allergan's management has legitimate reasons to argue that this offer is indeed inadequate.

Will Allergan survive a hostile bid?
I think this question is much trickier to answer, but my guess (emphasis: guess) is no. Pershing Square chief Bill Ackman is nothing if not persistent, as shown by his short-sale position in Herbalife. So I would expect him to continue to pursue a deal -- hostile or otherwise -- until it happens.

While Allergan previously floated the idea of "going big" by executing its own acquisition to stave off a hostile takeover bid, AbbVie's purchase of Shire would appear to leave the company short of potential candidates to pursue. In short, management is rapidly running out of options, and this lawsuit might be the last real shot at avoiding a hostile bid.

What are the potential consequences of successfully fending off a hostile takeover?
A quick look at the chart below would seem to suggest that Allergan's shares could drop in dramatic fashion if management can successfully waylay this takeover. 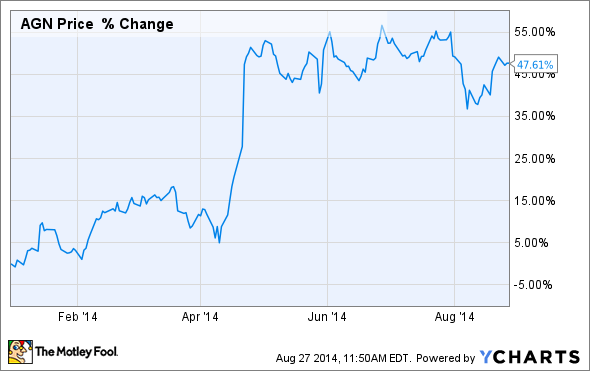 That's something for shareholders to consider, even if it doesn't affect the underlying business. Then again, if the company is able to generate the impressive earnings growth analysts are guiding for, we could see some nice appreciation over the coming years.

Foolish wrap-up
I think these three questions illuminate why Valeant and Pershing Square are so eager to push a deal through before year's end. Put simply, they would be getting Allergan on the cheap just prior to the company generating some impressive levels of growth over the next few years.