It's a seller's market in Dallas, Texas. Source: Zillow.com.

(Want to learn more? Be sure to check out what $1 million will buy you in Phoenix, Miami, New York, and San Francisco!)

In Dallas, Texas, a million bucks isn't what it used to be. At least not in the single-family real estate market.

Take this 3,304 sq. ft., three-bedroom home in Dallas' Kessler Park neighborhood. The house is spacious, comes with a pool, and is genuinely very, very nice. But with an asking price of $998,000, you don't get quite the same bang for your buck as you would in other cities, like Miami or Phoenix.

Housing bubble? What housing bubble?
The strength of the Dallas housing market, and the relative lack of post-bubble bargains, is directly attributable to the metro's strong economy. In fact, Texas powered through the recession with relative ease.

Consider that, during the past year, job growth in the Dallas-Fort Worth metro area has been nearly twice the national average. Texas saw personal income grow 4.9% last year, putting it in the top four of all U.S. states. The state's average home price is already above the pre-recession highs, and is still growing at a robust 8.7% annual clip. 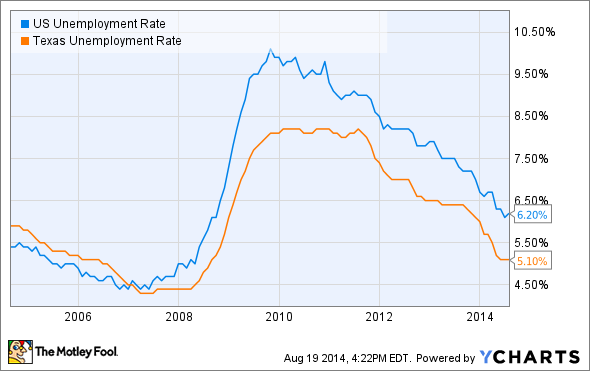 This broad-based strength is largely based on the explosion of U.S. oil and natural gas exploration and extraction. This reliance does create some risk for the area if commodity price fluctuations, or new regulation, create significant headwinds for that industry. However, Texas -- and Dallas specifically -- has also seen strong expansion in other sectors, with technology being particularly robust.

Focusing back on the housing market, Texas has fewer foreclosures, mortgage delinquencies, and underwater mortgages than the national average. From a fundamental economic perspective, the housing market in Dallas, and more broadly in Texas, looks poised to continue to rise. 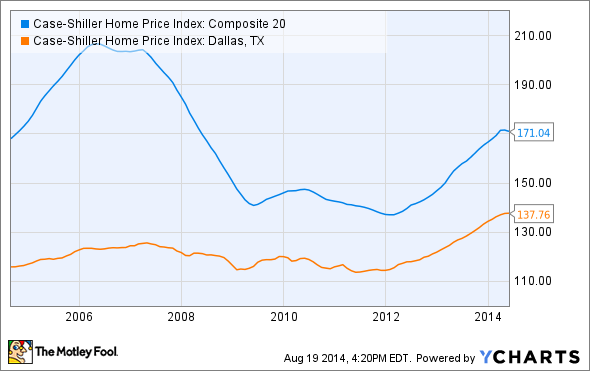 A unique market
At the end of the day, a million bucks still buys a very nice home in the Dallas-Forth Worth metro area. This 4,000 sq. ft., four-bedroom, four-and-a-half-bath home with views of White Rock Lake is a great example of that fact.

But what makes Dallas unique among most other major U.S. metro areas is that it's a seller's market. That 4,000 sq. ft. lake-view home was actually purchased two years ago for just $319,000. The new owner gutted the home and completely rebuilt the entire interior. Today, a short two years later, the property is back on the market with an asking price three times higher than before.

Taking a speculative risk like this wouldn't be feasible in many markets around the U.S. today. There's just too much weakness to justify taking on that much risk. But in Texas, things are different. The market is strong, and appears to be getting stronger. Supply and demand are in balance.

And that's why a million dollars won't buy you quite as much home in Dallas as it would in other U.S. cities.