(Want to learn more? Be sure to check out what $1 million will buy you in Dallas, Miami, New York, and San Francisco!)

A million bucks can buy a lot of things, including a four bedroom, 4,700 square foot ranch style home on the Moon Valley Golf Course in Phoenix, Arizona.

If you were to compile a list of top metropolitan areas hit by the real estate bubble in 2007 and 2008, Phoenix would almost assuredly find its way into the top ten. Today, six years later, the Phoenix-Mesa-Glendale metro area is finally finding its footing -- a footing that remains well below the pre-crisis highs.

Then and now
Phoenix has always been a sort of oasis in the desert, and today that oasis offers a lot of bang for your real estate buck.

That four bedroom golf course home mentioned above is a great example. According the estimations by real estate website Zillow (NASDAQ:ZG), this property was worth approximately $1.3 million at the peak of the market in 2007. A little over four years later, the property was sold for just $800,000 -- that's a near 40% decline from peak to trough.

From that trough we can also see a decent representation of the bounce back in real estate values as the city recovers from the crisis. Zillow estimates the property to currently be worth about $882,000, well below the current asking price of $999,999. Using that "Zestimate" value of $882,000 the property has appreciated 10.25% in just 16 months.

And yet, the Phoenix real estate market continues to trail the broader real estate recovery across the U.S. 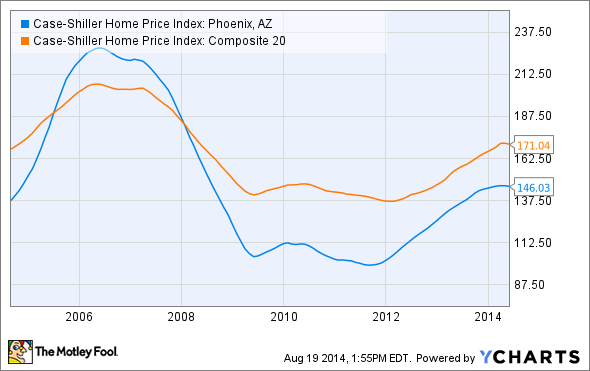 The local economy mirrors the local real estate market
The story of the real estate bubble in Phoenix is similar to many other metros in the U.S. First, shaky mortgage loans made to individuals who couldn't truly afford the monthly payments began to go sour. This led to the first wave of foreclosures.

Then, the stock market began to show signs of trouble and employers began cutting back hours or laying off employees. This strife in the labor market led to the second wave of foreclosures as the crisis spread.

And from those lows, it has been six years of slow, grinding recovery. Jobs returned only slowly and the pain of the recession was exacerbated not by continuing crisis, but by an endurance contest of economic disappointment. This article from October 2011 does an incredible job breaking down the story from the high to the low in Phoenix.

The recovery is on, but buyers are still in the drivers seat
Even a brief review of the area's significant economic measures shows a broad improvement in conditions.

For example, the unemployment rate is currently at just 6.6%, nearly half of the recession's high mark at about 12%. As the chart below shows, the initial hit to Phoenix's economy was more severe than the nation at large, but over time Phoenix has recovered and remains in step with national trends. 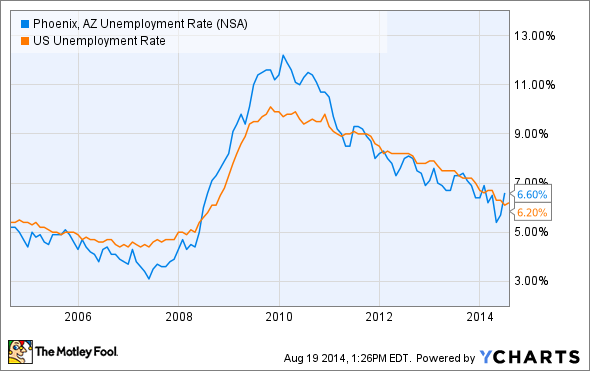 Even in this environment of general recovery, the real estate market still lags. For buyers, that means there is still plenty of opportunity and even more negotiating power -- particularly in the million dollar home price range.

Consider this six bedroom, five and half bath home in Paradise Valley. This home hit the market in February 2014 with an asking price of $1.2 million. By the end of April, the priced had dropped to $1.1 million. By June, the price dropped again to $999,000.

Oh, and the house comes complete with a lawn full of green grass for your desert enjoyment.

It seems that $1 million can buy quite a bit of house in Phoenix today.

What $1 Million Buys You In Phoenix, Arizona @themotleyfool #stocks $ZG Next Article
Current