Throughout the years, Intel (NASDAQ:INTC) has done a good job of treating shareholders well, being one of the first tech stocks to embrace paying dividends to investors and also returning billions of dollars in capital to shareholders through stock buybacks. In July, Intel said it would add $20 billion to its already generous share repurchase program, helping to bolster further interest in the stock. But as the company seeks to make a bigger splash in the mobile space, can Intel afford to take that capital away from its efforts to jump-start its long-term innovation and growth? Let's take a look at Intel's past share repurchases and whether the new buyback plan makes sense in that perspective.

Has Intel been smart about stock buybacks in the past?
Going back a full decade, Intel has been plagued by some of the same mistakes that many companies have made with their share repurchase programs. In 2005 and 2006, the company made big repurchases at relatively high share-price levels, and although it pulled back on its buyback activity at the 2007 highs, it was early in repurchasing shares toward the beginning of 2008. 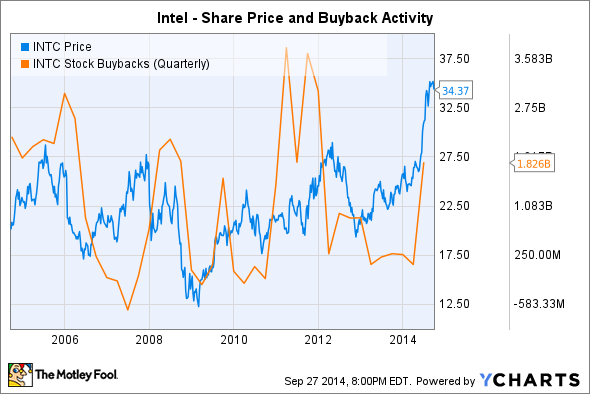 Yet more recently, Intel has done a better job of buying low and selling high. Substantial repurchases in 2009 were smart in hindsight, and its massive buybacks in 2011 as the stock languished behind the broader recovery in the stock market helped bolster confidence in the chipmaker. Yet with buyback activity having fallen back in the past couple of years, the renewal of repurchase authorization as the stock hits levels not seen since just after the tech bust seems oddly timed.

Will buybacks hold back Intel's growth efforts?
The natural concern among investors when considering a truly massive buyback is that a company won't have enough money left over to support its own growth efforts. But Intel has given its shareholders plenty of reason for optimism.

Intel's recent experience shows that it's having success with its multifaceted approach toward growth. On one hand, even as many analysts had declared the PC dead, Intel has managed to keep building market share in the PC industry and has also enjoyed an unexpected rebound in sales in the space, defying skeptics and suggesting that desktop machines aren't as obsolete as many had feared. Meanwhile, Intel's data-center business has reaped rewards from the move among major corporations toward greater use of data analytics and information collection to optimize their business strategies. Even in the mobile area, where Intel has lagged behind Qualcomm (NASDAQ:QCOM) and several other competitors for years, the company is finally working at products across the value spectrum to make a meaningful foray into the space.

With plenty of cash on hand and relatively little debt, Intel is in no danger of preventing itself from expanding in the future. Even a massive expansion in its buyback program shouldn't put financial pressure on Intel in the near-term.

Should Intel pay higher dividends instead?
Whenever a company has a big buyback, some investors wonder whether a dividend hike would be a better choice. After all, rising dividends give shareholders the choice of whether to buy new shares with their dividend payments or use the money in other ways.

Dividend investors have a reasonable case to expect higher payouts from Intel. Currently, the tech stock yields 2.6%, which is a respectable amount compared to the 2.3% that rival Qualcomm pays. Yet after nearly a decade of consistent dividend increases, Intel's last boost came in late 2012. With Intel currently paying out just 45% of its earnings in the form of dividends, it's easy to argue that the chipmaker has plenty of capacity to increase its dividends, at least slightly, while perhaps shrinking its buyback plans only minimally to finance the move.

Will Intel's buyback pay off?

Intel's buyback activity has done a good job of keeping share counts down for the company, with shares outstanding having dropped from around 6 billion in 2006 to just over 5 billion shares in 2014. With $20 billion representing about more than 10% of the market capitalization of the entire company, Intel's newest buyback should continue that trend going forward, providing a positive boost to earnings per share and helping to amplify any organic net-income gains.

Of course, with Intel stock having soared about 75% since late 2012, the danger of the buyback is that the company is buying shares at exactly the wrong time. Many companies fall into the trap of committing huge financial resources to buybacks when times are good, only to see that investment go bad when the economy turns and share prices fall.

So far, though, Intel's buyback strategy has been paying off for shareholders. If the chipmaker can keep finding success in its turnaround efforts, then the latest addition to its stock repurchase program could prove highly profitable for shareholders in the long run.