Please ensure Javascript is enabled for purposes of website accessibility
Log In Help Join The Motley Fool
Free Article Join Over 1 Million Premium Members And Get More In-Depth Stock Guidance and Research
By Andrés Cardenal – Oct 22, 2014 at 11:00AM

In matters of finance and investing almost everything is up for debate, but a few important facts are beyond discussion. Most people agree that Warren Buffett knows a thing or two about picking winning investments, and high-quality dividend stocks have proven their ability to deliver superior returns over the long term. Combining these two simple and powerful concepts, it makes sense to go through Buffett's portfolio in search of the best dividend stocks to buy in 2014.

Coca-Cola's formula for success
Buffett is a big fan of Coca-Cola (KO -0.35%), both the drink and the business. Competitive strengths, or moats in Buffett's terminology, are at the center of his investing philosophy, and Coca-Cola benefits from truly spectacular competitive strengths. In Buffett's own words, "If you gave me $100 billion and said take away the soft drink leadership of Coca-Cola in the world, I'd give it back to you and say it can't be done."

Coca-Cola is the undisputed leader in the global soft drinks market: the company owns 17 brands that bring in over $1 billion each in annual global revenue. It also has a growing pipeline of 20 smaller and growing brands that each generate annual sales of between $0.5 billion and $1 billion, many of which are probably on their way to becoming billion-dollar names. 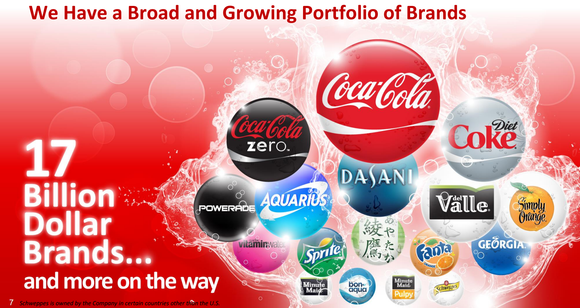 Coca-Cola also owns a gigantic bottling and distribution network with colossal international reach. This represents a key strategic advantage, not only in terms of keeping competitors at bay, but also when introducing new products on a global scale in a quick and efficient way.

Management has done a tremendous job in translating growing sales into increasing dividends through the years. Coca-Cola has increased its dividends for 52 consecutive years, including a generous 9% dividend hike for 2014. The payout ratio is about 59% of earnings estimates for 2014, and the stock pays a 2.9% dividend yield.

Wal-Mart is on sale
Wal-Mart (WMT -0.35%) is facing considerable challenges lately. The retail industry is particularly weak in the current economic environment, and competition from both online retailers such as Amazon.com (AMZN -1.63%) and mass merchants such as Costco is putting a lot of pressure on Wal-Mart. In this context, Wal-Mart has reported stagnant or even declining comparable-store sales over the last several months.

The good news for Wal-Mart investors is that lackluster sales growth is already incorporated into the stock's valuation to a considerable degree. The company trades at a P/E of 15.6, versus 17.5 for the average stock in the industry and an 18.4 average for companies in the S&P 500 index, according to data from Morningstar.

Besides, size is a crucial competitive advantage in the discount retail industry, and Wal-Mart is the biggest retailer in the world, with sales of more than $480 billion per year. This massive scale allows Wal-Mart to negotiate aggressively low prices and flexible financial conditions with suppliers, which the company translates into competitive prices for its customers.

As long as consumers want to keep purchasing all kinds of products at convenient prices, Wal-Mart should be able to continue leveraging its scale and delivering growing dividends for investors. The company has raised dividends for 41 consecutive years; the payout ratio is comfortably low, in the area of 38% of earnings; and Wal-Mart stock yields 2.6% in dividends.

Procter & Gamble is solid as a rock
Procter & Gamble (PG -0.76%) is a global market leader in several consumer staples categories, such as baby care, blades and razors, feminine protection, and fabric care, among many others. The company owns 23 billion-dollar brands, selling everyday necessities to nearly 4.8 billion customers in more than 180 countries.

While it's not easy for a global giant operating in mature industries to find growth opportunities big enough to move the needle by much, its dominant market position in stable product categories provides reliability and predictability to the company's cash flow. This is a key trait in a dividend stock, and a quality that Buffett clearly appreciates. From Buffett's letter to investors in 1996:

Your goal as an investor should simply be to purchase, at a rational price, a part interest in an easily understandable business whose earnings are virtually certain to be materially higher five, ten and twenty years from now. Over time, you will find only a few companies that meet these standards-so when you see one that qualifies, you should buy a meaningful amount of stock. You must also resist the temptation to stray from your guidelines: If you aren't willing to own a stock for ten years, don't even think about owning it for ten minutes. Put together a portfolio of companies whose aggregate earnings march upward over the years, and so also will the portfolio's market value.

Procter & Gamble has a truly extraordinary dividend trajectory. The company has paid uninterrupted dividends since its incorporation in 1890, which means 124 consecutive years of consistent payouts for investors. In addition, Procter & Gamble has increased its dividend annually for the past 58 years; this includes a 7% increase for 2014.

The payout ratio is at a moderate 58% of earnings, and Procter & Gamble stock pays a generous 3.1% divided yield.

The takeaway
Coca-Cola, Wal-Mart, and Procter & Gamble have been selected by Warren Buffett himself for his exclusive portfolio of high-quality investments. The three companies also offer outstanding trajectories for dividend growth over the decades. When Buffett and dividends are saying the same thing, investors might want to listen.