For example, Insys Therapeutics (NASDAQ:INSY) may offer investors an intriguing blend of proven results and promising opportunity. Here are three reasons why I think that Insys could make a profit-friendly addition to portfolios.

1. Been there, done that
A lot of the risk in medical marijuana companies stems from unproven management and spotty revenue. The industry is ripe for pump-and-dump operators looking to cash in on the next hot thing. So it's nice to see that Insys has been around a while and boasts a management team with that has shown it knows how to execute.

Insys management's track record includes the launch of a highly successful formulation of the cancer pain medication fentanyl, a drug widely used to treat breakthrough cancer pain. Since launching the drug in 2012, management has successfully turned Subsys into a top selling treatment with best-in-class market share. In the second quarter, Subsys sales totaled $54.6 million, giving the drug an annualized sales run rate of about $220 million.

Management's success with Subsys gives me confidence that the company can win with oral dronabinol, too. The FDA application for dronabinol, Insys oral formulation of the cancer chemotherapy drug marinol, was kicked back to Insys last month so that the company could add information regarding dronabinol's potential impact on children. Once Insys fills in the blanks and resubmits the application, the company may get one step closer to having a second drug in its product line up that has nine-figure sales potential.

2. Increasing opportunities
Subsys provides Insys with plenty of cash flow to support the company's growing product pipeline, which includes new studies that will evaluate the use of the cannabinoid CBD in epilepsy and brain cancer patients.

Promising pre-clinical results and anecdotal evidence stemming from the use of CBD oil in some patients has sparked enthusiasm for using CBD to treat rare forms of epilepsy, such as Dravet Syndrome and Lennox-Gastaut Syndrome, or LGS. Those two indications are relatively small, affecting just thousands of patients; however, treatment options are few and that has many thinking that the FDA and EU regulators will be more willing to embrace CBD drugs.

Earlier this year, Insys received FDA orphan drug status to study CBD therapy for Dravet and LGS and the company plans to launch its first human trials in the first half of 2015. Eventual approval for those conditions is a way out, but their potential could provide additional sales into the end of the decade.

But its not just the opportunity in epilepsy that may provide future growth. Insys has also received orphan drug designation for the use of its CBD therapy in glioblastoma multiforme, a common and fast-moving brain cancer.

3. Enviable financials
While GW Pharmaceuticals (NASDAQ:GWPH) has turned to the equity markets to fund its research program through dilutive share offerings, Insys remains debt free with $75 million in cash and equivalents on the books.

Thanks to a quickening sales pace for Subsys, Insys' balance sheet should continue improving. Insys' net income jumped from $4.7 million to $17 million through the first six months of this year, and that led to earnings per share of $0.99 during the first two quarters (up from $0.39 last year), and brought its net income over the past 12 months to an impressive $52.8 million. 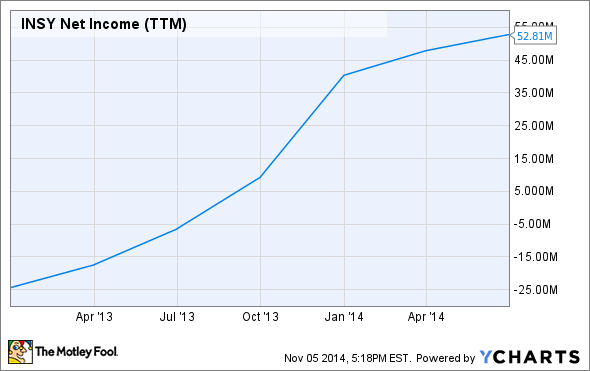 Since Insys has one of the best balance sheets in the emerging marijuana industry and is notching millions in profit already, it may prove to be a far less risky investment than GW Pharma, which is losing money, particularly considering that the two companies' market caps are essentially the same.

Looking ahead
A lot of questions remain for medical marijuana makers, including whether market demand will justify investor optimism. As a result, most marijuana stocks expose investors to a lot of risk, making them best suited to the most aggressive investors. Having said that, Insys has proven that it's a viable company, with a growing stable of potential drugs, and the financial flexibility to reward investors. If that stays true, Insys may be in the best position to dominate in the medical marijuana market.