Amazon.com (NASDAQ:AMZN) might be ready to launch a new, cheaper streaming video service -- but will it be doing so at its own expense? We'll soon find out.

According to a recent report from the New York Post, sources familiar with the situation confirmed Amazon's plans to introduce an ad-supported streaming video service early next year are a "definite go." The Post didn't specify whether the new service would be free, but it did cite Wedbush analyst Michael Pachter as both suggesting it would be decoupled from Amazon Prime and undercut Netflix's (NASDAQ:NFLX) current streaming price of $7.99 per month. And that, Pachter insists, "is a Netflix killer."

Amazon's end-game
Of course, it's not entirely surprising such an ad-supported video streaming service would undercut Netflix. As it stands, Prime costs only $99 per year (that's $8.25 per month) and also includes unlimited online photo storage, a premium music service, the Kindle owners' lending library, and -- perhaps most notably -- free two-day shipping on millions of items from Amazon's core retail site.

At the same time, however, that outsized value proposition also underscores Netflix's market leadership with over 53 million streaming members and counting. According to the NYP report, roughly 25 million of Amazon's estimated 50 million Prime members use Prime Instant Video. 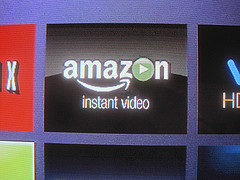 But if Amazon can offer the impending ad-supported video service alone for much cheaper (or free) while maintaining its impressive content lineup, there's no doubt it could represent significant competition for the likes of Netflix or Hulu in gathering new members.

And not only would Amazon be able to collect advertising revenue from viewed content, but one NYP source unsurprisingly states its primary aim is to use the new service to eventually upsell new viewers to a more lucrative Prime membership.

Not so fast ...
But couldn't such an inexpensive video streaming service also harm Amazon Prime?

After all, video does appear to be a big driver for Prime users to either sign up or renew. Consider these words from Amazon CFO Tom Szkutak during Amazon's most recent earnings conference call:

We continue to invest heavily in video content including originals, and there are a number of different metrics we're looking at certainly from a Prime standpoint. But what we're seeing so far are those customers who are streaming are renewing at considerably higher rates from a rate that's already high. So we like what we see there. [...] When customers come in for free trials and they engage from a video content standpoint, we see the conversion being higher.

If any meaningful percentage of Amazon's 25 million Prime Instant Video user base considers this as compelling justification for their broader-reaching Prime membership -- and that seems to be the case based on Szkutak's comments above -- Amazon's cheaper ad-supported video service could result in higher churn from users who would otherwise stick with their $99-per-year subscription.

What's more, the users Amazon is targeting with this low-cost service will almost certainly be comprised of those it has so far found difficult to convince of Prime's value proposition. That's not to say it can't do so, and we still have to keep in mind that Amazon would simultaneously be collecting ad revenue. But Amazon had better hope more of these harder-to-sell consumers jump over to the Prime side of the fence than the other way around.

Foolish takeaway
In any case, it stands to reason that an ad-supported video service could at the very least partially negate Amazon's Prime upsell ambitions. Considering Prime members as a group tend to purchase more physical product from Amazon's core retail operation than typical shoppers -- and noting net product sales last quarter grew 16% year-over-year to $16 billion, or nearly 78% of total revenue -- Amazon investors should keep a close eye on whether this new ad-supported video service has the net positive effect the company desires.