The sudden departure of United Technologies Corporation (NYSE:RTX) CEO Louis Chenevert must have baffled investors, but anyone expecting more color on the subject, or a change of strategic direction from the company, would have been disappointed by last week's investor meeting. Instead, newly appointed CEO Gregory Hayes outlined a set of targets consistent with the company's previous guidance. In this context, it's time for a refresh on United Technologies' strategic objectives and why the stock might be attractive for your portfolio.

Objectives
Ever since the abrupt departure of Chenevert at the end of November, investment analysts have been speculating on potential changes in strategy. However, Hayes wasted no time in revealing that the company wouldn't be splitting its aerospace and building systems operations. Furthermore, Hayes said, "We are not going to sell Sikorsky" -- America's leading helicopter maker and, currently, the company's least profitable unit.

Moreover, management reaffirmed some of its long-term objectives:

I've picked out these three objectives because they relate to the key takeaways from the event. Before going into detail, here is a chart of segmental profits for the first nine months of 2014, so readers can put the segmental commentary into context. Otis and UTC Climate, Controls and Security are its building systems businesses; the rest are aerospace businesses. 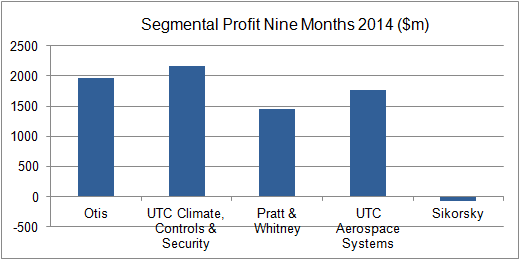 Key takeaways
First, the revenue target suggests that some acquisitions may be forthcoming, because it's hard to see how the company can hit $100 billion in revenue by 2020 with organic growth alone. For example, management expects sales to grow to $66 billion-$67 billion in 2015, helped by 3%-5% organic growth. At the midpoint, this implies that revenue growth will then accelerate to a compound annual growth rate, or CAGR, of 8.5% from 2015 to 2020 -- a rate double its current organic growth rate.

Second, the revenue growth target for Pratt & Whitney and UTC Aerospace Systems includes an assumption of a 7% CAGR between 2014 and 2020. Again, this is significantly ahead of global GDP growth. It attests to the confidence management has in the integration of its acquisition of Goodrich (UTC Aerospace Systems) and, equally important, the adoption of its geared turbofan engines (Pratt & Whitney). The engine's principle competitor is CFM International (a joint venture between General Electric and Snecma), with Boeing's A320neo airplane being a key battleground.

Third, the cost synergies outlined for the UTC Aerospace Systems segment highlight one of the key ways that the company can improve its operational performance. An in-depth analysis of United Technologies Corporation versus Honeywell International demonstrates how the Goodrich acquisition negatively affected return on equity and asset utilization (two key measures of operational performance) for United Technologies, but if the planned cost synergies are being achieved, the company could get back onto par with a peer like Honeywell.

Where next for United Technologies?
After a period in which the company invested heavily in order to develop its geared turbofan engine, it now looks likely that United Technologies will start to reap the rewards. In addition, management can generate value for shareholders simply by integrating Goodrich in line with its plans -- its growth prospects are not just about its end markets.

However, prospects at an industrial giant like United Technologies are never really going to decouple from global growth, and the company faces challenges from military spending cutbacks (Sikorsky helicopters) and from slowing growth in China's construction market (Otis elevators). In other words, it may need to execute well with the Goodrich integration and its geared turbofan engines in order to offset any weakness elsewhere.