When long-term investors compare the investment case for industrial conglomerates such as United Technologies Corporation (NYSE:RTX) and Honeywell International Inc. (NASDAQ:HON), they often focus on a metric called return on equity, or ROE. In a nutshell, ROE measures the net income a company produces from shareholder equity.

Today I'm going to break down why ROE is such an important measure for valuation purposes and how it determines a company's ability to grow its dividend. Moreover, I'll carry out a DuPont analysis, a method of garnering more detail on why one company is outperforming another, so that readers can best decide what to do with their money.

Why return on equity matters
One of the simplest and most commonly used valuation methods for stocks is the Dividend Discount Method, also known as the Gordon Growth Model. Simply put, it's a way of valuing a stock based on the potential for future dividend growth. Don't be alarmed by the equations; it's simple stuff.

"DPS" stands for dividend per share, "r" is the required rate of return, and "g" is the expected dividend growth rate.

The value of "g" is calculated as follows:

The "EPS" stands for earnings per share. The larger ROE is, the larger "g" will be, and therefore the theoretical stock price should be higher, too.

ROE matters a lot in determining a target stock price in this model. Let's see why -- and note that instead of calculating the stock price from plugging in the required rate of return, or "r," I've used the current stock price to calculate the theoretical rate of return, identified as "r*," that the market is pricing in.

Clearly, Honeywell has a stronger RoE, and that's helping its stock have a higher expected dividend growth rate. In addition, Honeywell looks like it's the cheaper stock, because it has a higher theoretical rate of return. What this means to investors is that the market is currently pricing in, based on this model, an 18.1% rate of return for Honeywell, versus only 14.4% for United Technologies.

However, this isn't the full picture. It's time to delve deeper into ROE using a DuPont analysis.

DuPont Analysis of Honeywell and United Technologies
Simply put, this is a method of analysis that breaks out the components of ROE, so investors can compare each measure and see where the differences in performance lie. The following graphic outlines the five components -- which, when multiplied together, produce ROE. 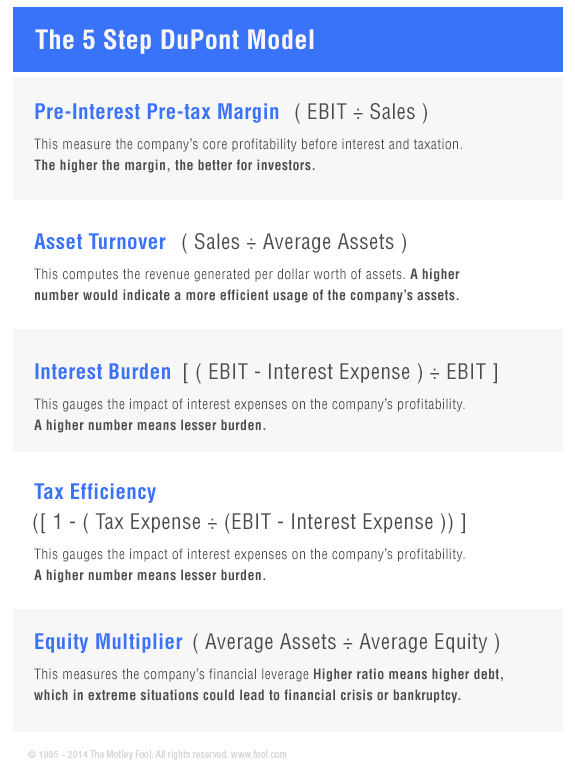 Here's a look at the values Honeywell and United Technologies created when we carry out this analysis.

The two factors that produce numbers with more than 5% difference are pre-interest pre-tax margins and, to a greater extent, asset turnover. Focusing on asset turnover -- a measure of how well a company generates sales from its assets -- reveals that there has been somewhat of a divergence between the two companies in recent years.

For ease of reference, the following chart defines asset turnover as "asset utilization." 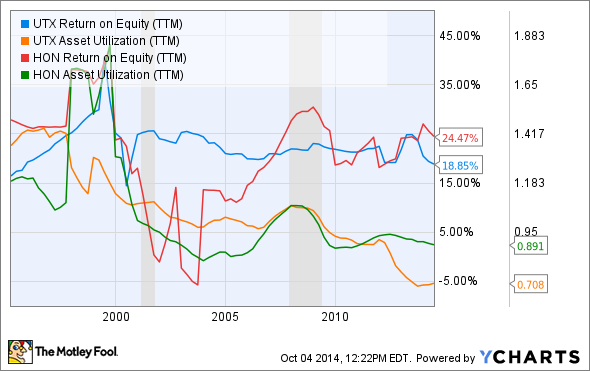 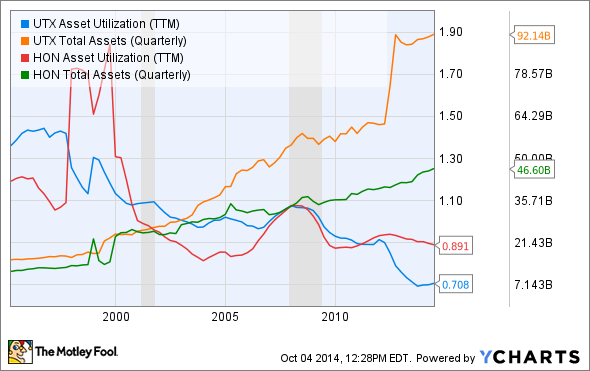 Going forward, there appear to be two major opportunities for United Technologies to close the gap with Honeywell International. The first is the generation of margin improvements and sales, with the integration of Goodrich, and the second is the success of its geared turbofan engine in the Pratt & Whitney segment -- investors can read more about that here. (Or go here for a more detailed overview of Honeywell International.)

Playing with the numbers demonstrates the potential for United Technologies. For example, assuming that its asset turnover eventually reaches the 0.9 figure Honeywell recorded would mean that, all else being equal, United Technologies' ROE would now be 23% instead of 19.3%, and its expected dividend growth rate would be 14.4% instead of 12.1%.

That may not seem like much, but it does mean that for United Technologies at its current $104 stock price, the theoretical rate of return, based on the Dividend Discount Method, would now be 16.7% instead of 14.4% -- a significant difference.

The takeaway
United Technologies' stock still looks expensive compared to Honeywell International. However, a DuPont analysis reveals that the value discrepancy would look a lot smaller if United Technologies could integrate Goodrich in line with its plans and develop sales of its geared turbofan engine -- particularly on the Airbus A320neo and Bombardier's CSeries. Investors should keep a close eye on United Technologies' ROE and hope that it increases in the future.