I can only recommend Marco Polo to those suffering from insomnia. Image source: Netflix

If you haven't checked out the new Netflix (NASDAQ:NFLX) original series, Marco Polo, I can't recommend that you do so now. While the series will appeal to a small audience, it's definitely not the blockbuster Netflix was hoping for with its $90 million production budget.

Of course, not everything Netflix produces can be a hit. Of the dozen or so originals the streaming company has produced, only two -- House of Cards, and Orange is the New Black -- are true hits. But with competition from Amazon (NASDAQ:AMZN), Time Warner's (NYSE:TWX) HBO, and Hulu for the rights to content -- both original and syndicated -- Netflix needs to continue spending big on original content.

HBO hasn't always produced hits. It's current slate of original programming consists mostly of series that began within the last three years. In that time, the premium cable network has premiered about one cancelled show for every show that's still on the air. But people still subscribe and tune in because the company has a good track record of producing content people can't get enough of.

With plans to accelerate original content production in 2015, Netflix will likely find another hit to round out its arsenal of shows and keep subscribers hooked. Netflix has to be careful not to outspend its subscriber growth, but as it's still in the early stages of international expansion, there seems to be room for experimentation.

Netflix's advantage over cable networks
The biggest advantage Netflix has over a cable channel is that it's on-demand only. That means if a show like Marco Polo flops, and people stop watching it halfway into episode 3 (guilty), they can simply watch something else on Netflix.

If HBO picks up a series, it has to dedicate a time slot to the show, which means there's a bigger opportunity cost involved for the company. Streaming services like Netflix and Amazon Prime Instant don't have that opportunity cost, which means they can afford to take more risks. The freedom to take risks ultimately produces better content -- see Amazon's breakthrough hit Transparent.

But in order to take those risks, there has to be a good alternative. The bulk of Netflix's content needs to be compelling enough to keep subscribers waiting for the next original even if the current one flops. And that's where Netflix faces a real challenge.

Biting the hand that feeds it
Netflix and on-demand streaming in general are cutting into household broadcast and cable TV watching time. As a result, in its next round of negotiations with content producers, the price is likely to be higher.

There's also the fact that Netflix will face competition from Amazon, Hulu, and HBO, which are either bigger companies with more cash on hand or, in the case of Hulu, owned by three large content producers with deep pockets. More bidders on content is another reason the price is likely to increase.

The problem is Netflix is already spending all of its money on content. Over the trailing 12 months, the company had free cash flow of negative $47.6 million. While international expansion has cut into its free cash flow, the bulk of its costs come from content obligations. Netflix is able to hide those costs in its income statement by amortizing them over the life of the contract. 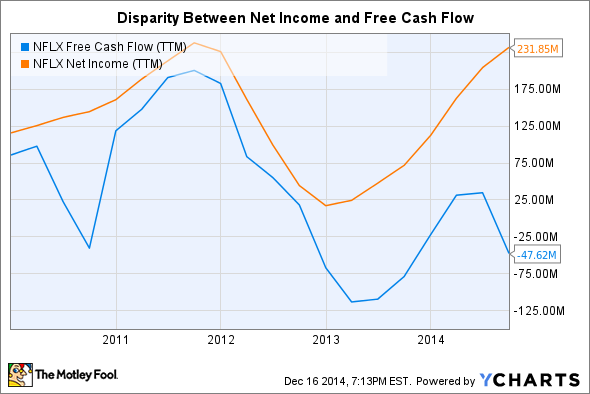 But Netflix needs to continue making deals -- renewing content, buying new content, and acquiring international rights -- every quarter in order to continue attracting new subscribers and keep old subscribers around. And every quarter, the price from content producers gets a bit higher as they lose viewers to Netflix.

This puts Netflix in quite a predicament. As it gains subscribers, it attracts viewers away from live broadcasts, which hurts content producers. When content producers go to sell their content, they'll want to make up for the lost revenue by charging Netflix more.

One way out of that predicament is for Netflix to produce its own content. It doesn't quite have the back catalog of HBO to cut ties with traditional television producers in case it comes out with a flop like Marco Polo.