There are lots of different ways to save for retirement, but none is more important to working Americans than a company's 401(k), 403(b), or 457 plan. While just about anyone can open up an IRA, funds in IRAs only accounted for 26.5% of all retirement savings in 2010, according to the Employee Benefits Research Institute.

That means that most Americans are relying on their workplace retirement program to help them fund their golden years. Figuring out where you stand among your peers can be a difficult task. 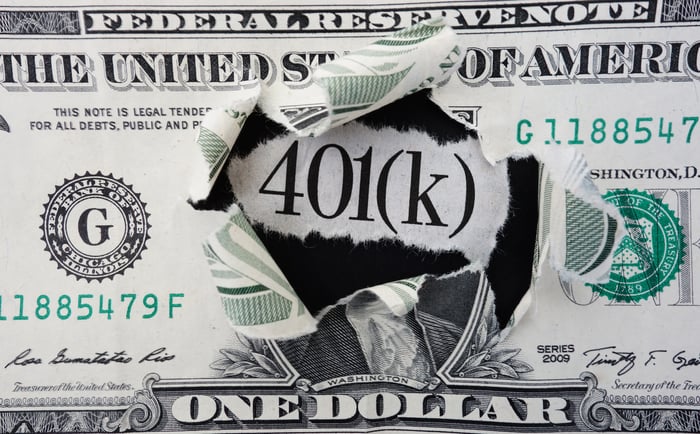 First, let's look at overall trends, then see what kind of differences exist when we break the average 401(k) balance out by one's age and salary.

Things are getting better, but there's still a long way to go

According to Vanguard's 2016 report, How America Saves (link opens a PDF), our 401(k) balances are actually dropping. The average (mean) 401(k) account registered with Vanguard clocked in at $96,288. That's down 5% from just two years ago.

But the news isn't all bad. As Vanguard notes: "the rising adoption of automatic enrollment...results in more individuals saving, but also in a growing number of small balances."

These numbers need to be put into perspective. Using the 4% rule for safe withdrawals, a balance of $96,288 will provide just over $3,850 per year in retirement -- a number far below what some might expect.

Even more disconcerting is the fact that the mean 401(k) is much higher than the median 401(k) -- thanks to high earning/saving outliers. If we are looking at median 401(k) balances, the number clocks in at $26,405.

But even this data is somewhat misleading. Simply looking at the "average" 401(k) balance doesn't help you find out where you stand -- there are huge differences when we account for age and salary.

As you might expect, the number of years you've had to work and save has a huge effect on the amount in your 401(k). To see where you start, check out your cohort below, and remember that the median is usually more indicative of where you stand than the mean.

Average 401k Balances, by Age
Create your own infographics

It's again worth pointing out that even $200,000 might not be enough for many retirees. Although Social Security, pensions, and any IRAs will help augment this figure, $200,000 in your 401(k) translates to just $8,000 per year in retirement.

Next, let's investigate the role that your income plays in your 401(k) balance.

Again, the general trend plays out as expected -- the more you earn, the more you are able to put away in your 401(k). That being said, the main point of interest for many is seeing where they lie compared to others in their cohort.

Don't pat yourself on the back too quickly

While you might be feeling pretty good about where you stand against your peers, even the mean 401(k) balance will likely provide less than some retirees realize. That doesn't mean you should throw your hands up in the air or panic about your retirement savings.

Instead, you should focus on what you have control over. Fellow Fool Selena Maranjian recently outlined six steps you can take right now to shore up your retirement savings.

And I've long been a proponent of finding out your "enough" level. In essence, this means tuning out the commercialism that encourages rampant consumption, and finding out what you really need to lead a fulfilling life.

Almost always, such introspection creates a double-win in terms of retirement savings. First, it reduces your spending and -- therefore -- the amount of money you'll need for retirement. And secondly, it gives you more cash to invest in your 401(k) -- making it far easier to meet your needs in your Golden Years.