Retirement planning pessimists got you worried? Take this message to heart, along with a little education. Photo: Flickr user Andre Ribeirinho.

It's no secret that when it comes to retirement planning, we Americans are playing a game of catch-up. Sometimes the numbers can seem so overwhelming that it's easy just to throw our hands up and concede that we're headed toward doom and gloom. That's exactly what an article from the Huffington Post did last week, stating that, "retirement at 65 is a fairy tale."

But that's a trap we can't fall into -- least of all here at The Motley Fool. Our purpose is simple: to help the world invest better. When it comes to confronting these bleak retirement-planning figures, that means avoiding the impulse to complain and focusing instead on what we, as individual investors, can control.

First, we must question the conclusions that the pessimists come to. And second, we need to identify concrete steps anyone can make to shore up their retirement plans.

The aforementioned Huffington Post article is a prime example of pessimistic thinking. The author cites a November 2014 report from the Center for a Secure Retirement to come to a host of negative conclusions.

Here are a few key examples:

Of the respondents, 45 percent were already retired, noted the press release. You say 'retired,' I say 'lost their job and couldn't find another one.'

While the 45% figure is correct, nowhere does the report mention how or why people entered retirement. It's possible that some were forced into retirement before they were ready. But the fact that such a large portion of this cohort was already retired makes the claim that retirement at 65 is a "fairy tale" seem dubious at best.

Once upon a time ... there lived a generation of people who as a birthday present to themselves, wrapped up their careers when they turned 65 ... never to step foot in an office again.

The grass is always greener, and the past was always better, right? Actually, if you dig into the numbers, you might be surprised.

As fellow Fool Morgan Housel has shown, this is the biggest retirement myth ever told. For starters, the very concept of retirement only became popular after World War II -- meaning its time in existence accounts for about 0.01% of human history.

And those pensions that were available to "everyone"? According to the Employee Retirement Benefits Institute, the number of Americans with pensions peaked in the 1990s, when 40% of workers had them -- and that includes public employees.

This quote actually comes from the Center for a Secure Retirement's study, not the Huffington Post article:

Two-thirds (62%) of middle-income Boomers express some doubts that they will have enough money to live comfortably throughout retirement.

But even here, there's a noticeable bias at play. Here's what the numbers actually looked like: 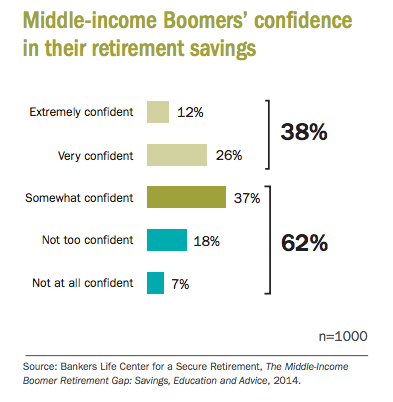 Source: Center for a Secure Retirement.

One could just as easily have lumped the middle group into the opposite category and concluded that, "Three-quarters (75%) of respondents were at least somewhat confident about their retirement savings." That isn't to say that this is the "correct" representation of the data, but rather that this data is open to interpretation.

More importantly, concerns about finances are common among people heading into uncharted financial waters, such as retirement. But a Merrill Lynch/Age Wave study found that, by a factor of two to one, those concerns were largely overblown, and the real obstacle that retirees weren't prepared for was the loss of social connections.

Here are steps anyone can take to help themselves
The most disappointing thing about the Huffington Post article is that, when it came to advice, the simple conclusion was "that we all invest in our health and stay on the job as long as we can."

But this ignores scores of important, viable suggestions that the Center for a Secure Retirement's report made. Among those suggestions:

By acknowledging the cold, hard facts -- but remaining optimistically focused on solutions -- you can greatly improve your retirement planning situation.