Please ensure Javascript is enabled for purposes of website accessibility
Log In Help Join The Motley Fool
Free Article Join Over 1 Million Premium Members And Get More In-Depth Stock Guidance and Research
By Travis Hoium - Jan 11, 2015 at 11:00AM

The market has crushed solar stocks, so now may be a great buying opportunity.

Solar stocks have been beaten up over the past year, primarily because investors have sold off all energy stocks as oil has fallen. Solar was thrown out with the rest of the industry despite the fact that solar energy rarely competes with oil markets directly. 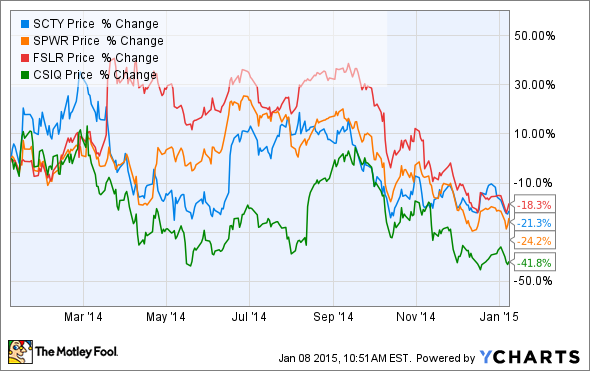 Given the tremendous growth potential of the solar industry, now may be a great time to jump into solar stocks. Here are three I think have high potential over the next few years.

SunPower
The list of solar companies that have differentiated technology, serve diverse segments and geographies, and are profitable is a short one. In fact, the list may be a single company: SunPower (SPWR 3.62%).

Over the past year, SunPower has reported $133.5 million in GAAP net income and adjusted earnings of $1.54 per share. This is while stashing hundreds of MW of projects on the balance sheet in preparation to launch a yieldco in 2015.

What separates SunPower over the long term is that it has technology that's fundamentally different from that of competitors. SunPower's X-Series panels are 21.5% efficient, and next generation panels are expected to reach 23%. This is at a time when most solar panels are still 14% to 16% efficient. Higher efficiency lowers the cost of each kW-hr of electricity, because you can squeeze more energy from a smaller space. Less land, fewer wires, and fewer labor hours are needed to install each system.

SunPower is also diversified across all markets. It competes with SolarCity (SCTY.DL) and Vivint Solar (VSLR) in the residential space, and is building the largest solar plant in the world, a 579 MW project being sold to Warren Buffett's MidAmerican Energy. The company is also diversified around the globe. You can see below that management has a 10 GW power plant pipeline building across diverse locations. 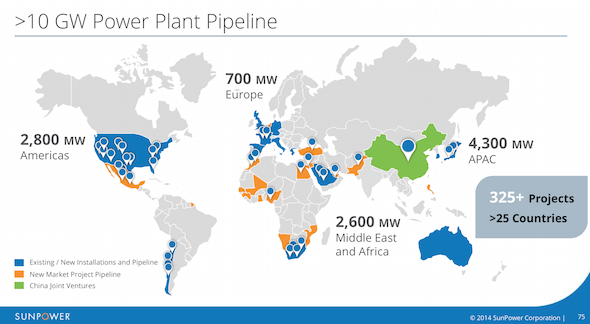 On top of trading at a value of 16 times non-GAAP earnings and adding about 100 MW of project to the balance sheet each quarter (hiding value from the income statement), SunPower is expecting to triple production over the next five years, so the company is growing quickly. The question is when the market will realize this potential.

SolarCity
The company that's taken the solar industry by storm over the last few years is SolarCity (SCTY.DL), the residential and commercial solar installer. The Elon Musk company is planning to install as much as 1 GW, or enough solar energy to power 164,000 homes, in 2015, and expects to have 1 million customers by mid-2018.

Where SolarCity is differentiating itself is in building scale in the distributed solar market and standardizing installations across hundreds of crews. The next phase is vertically integrating to cut costs and to become more competitive in more states. The acquisition of Zep Solar brought racking in-house, and the Silevo acquisition last year also brought module manufacturing under SolarCity's umbrella.

Over the next two years, SolarCity will be building a 1 GW manufacturing plant to build modules using Silevo's technology. If successful, it should further reduce installation costs below the $2.90 per watt cost today.

Unlike SunPower's diverse business, SolarCity is a concentrated bet on the U.S. residential and commercial markets growing over the next five years to nearly all 50 states. The company has a hurdle ahead with the reduction of the solar investment tax credit from 30% to 10% of a system's cost set to take place in 2017, but given SolarCity's ability to lower costs and get into new markets, like energy storage, I think it will navigate the solar industry's future better than most competitors.

First Solar
People often forget that First Solar (FSLR 2.95%) is still a leader in the solar industry. In the last twelve months the company has reported $270.2 million in net income, making it one of the most profitable solar companies in the world.

But First Solar has been discarded by investors because it lags the market in technology at the moment. Management is expecting to end 2014 with 14.9% average module efficiency, but it has plans to increase efficiency to about 17.2% by early 2017. Long-term, it hopes to reach low-20% efficiency, making it more efficient than commodity silicon-based solar panels.

What First Solar lacks in solar panel efficiency, though, it makes up for in efficiently building solar plants. The company's focus is on utility scale projects, and it has lowered costs enough that it can sell projects for less than $2 per watt and still generate nearly a 20% gross margin. Even if First Solar's panels prove too inefficient to be competitive in the future, it can become a power plant builder, similar to SunEdison.

The upside for First Solar investors is that management is executing on technology improvements. If efficiency increases without increasing costs, it would allow management to increase margins and also expand production in the future. If that happens, the stock could skyrocket.