What: Oil prices are rallying again Monday thanks to a rapid reduction in the U.S. rig count. While the price of crude is off its high, oil is still up about 2% Monday, which has sent oil stocks like Denbury Resources Inc. (NYSE:DNR) higher. However, surging crude isn't the only fuel behind Denbury's recent double-digit stock rally. 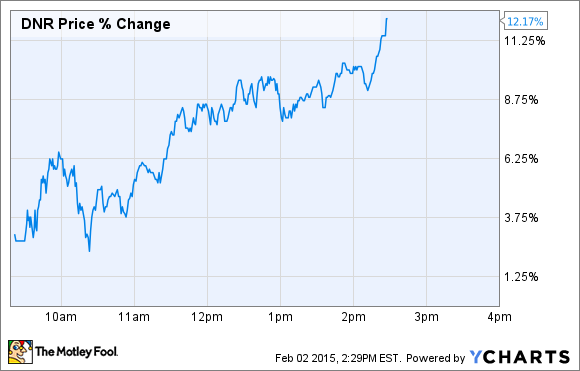 The other thing driving Denbury's stock higher Monday is positive analyst comments surrounding its hedge book. An analyst from Sterne Agee put out a note that said Denbury's oil hedges were worth 33% of the company's entire market cap, which is by far the best in the industry.

So What: Because of its strong hedges Denbury Resources is fairly well protected from falling oil prices this year. As such, the company's cash flows are largely locked in so the recent rally in oil prices really isn't as meaningful to the company in the short-term as it is to other producers.

However, those hedge do hold a lot of value these days because of how far oil prices have come down over the past year. According to Sterne Agee Denbury's hedges are worth $811 million at the current strip price, which equates to a stunning 33% of the company's $2.4 billion market cap. Because of this the company could choose to monetize its hedges and then rehedge its portfolio at lower prices. This would bring in a lot of cash that can be used to repay debt and/or buyback stock. In a sense, it's a hidden asset that is proving to be more valuable than the market realized.

Now What: Denbury Resources really is in a strong position thanks to its robust oil hedges. Not only are those hedges protecting its cash flow this year, but they've become a bit of a hidden asset. Because of this the company has more options than its peers as it could elect to monetize the hedges now and use the cash for other purposes or it could hold on to them in order to protect is cash flow should oil prices remain weak.