If there's one thing that could cause a further plunge in oil prices just in time for summer driving season it's the growing U.S. oil glut. Oil inventories are as high as they've ever been, and it might not be long before the country literally runs out of a place for all of its petroleum.

Worse yet, there are reasons to believe the supply glut will get much worse before it gets better. Depending on whether you're a consumer cheering for lower gas prices or an oil producer in a U.S. shale play, that could be either a very good or a very bad thing. 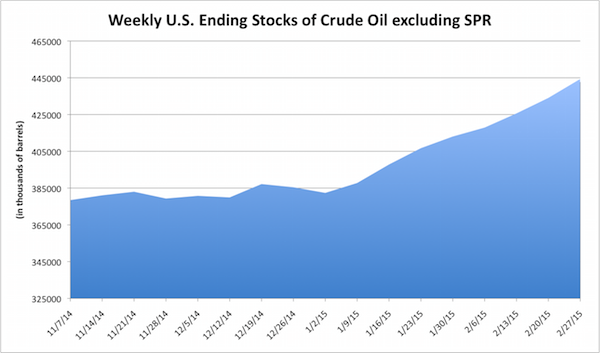 Rising inventory isn't a problem if you can store an infinite amount of oil, but that's obviously not the case. The U.S. Energy Information Administration said in a report this week that inventories had risen from 48% of capacity a year ago to 60% as of the week ended Feb. 20. The chart above shows the capacity problem has only gotten worse in the two weeks since that data was taken.

Capacity in Cushing, Oklahoma, where West Texas Intermediate crude oil contracts are delivered, reached an incredible 67%. The fear is that a certain amount of inventory space is needed to take delivery of contracts and feed refineries. We might be approaching the working capacity of the industry in the U.S.

What happens when there's nowhere to put oil?
If we run out of space for new oil, the impact will be felt up and down the industry. Producers in the Bakken shale, Eagle Ford shale, Gulf of Mexico, and elsewhere will have nowhere to ship oil, and prices will plunge as a result of the growing surplus. It's simple supply and demand.

Ironically, tankers operators such as Frontline (NYSE:FRO), Nordic American Tankers (NYSE:NAT), and Teekay Tankers (NYSE:TNK) are going to become a new source of inventory for the industry. Tankers are beginning to be used to store oil to perform arbitrage with oil prices, and that could expand in coming months. Frontline said in its fourth-quarter results that "the oil price drop is positive for tankers."

But not everyone is going to enjoy the glut of oil in the U.S., and another factor could drive inventories much higher before the market adjusts in a significant way.

Back to reality
The U.S. is actually making oversupply a bigger problem than is necessary. Export of U.S. oil is largely prohibited by a 1970s ban intended to protect the country from outside forces that could disrupt energy security. The ban had not been much of a problem because the U.S. imported a majority of the oil it used.

But that has changed in a rapid way since 2005, when net oil imports peaked at 60.3% of total consumption. That figure has fallen to about 27% today, and the situation is distorting prices in the U.S. and internationally.

You can see below that the per-barrel price of Brent crude oil is now more than $10 per gallon higher than the price of West Texas Intermediate (which is the U.S. benchmark), meaning it would be prudent for U.S. producers to export some of their oil. That would ease the inventory glut and bring some balance back to the market. But exports are still banned. 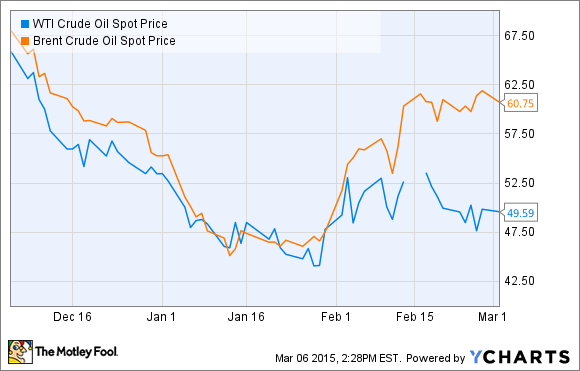 If the ban isn't lifted -- something Congress is considering -- it could send domestic production into a tailspin driven by high oil inventories. That might be good for consumers, but could mean a major adjustment for producers and the millions of people who work in oil-related businesses, and not in a good way.

Don't be surprised if oil prices move sharply lower if exports aren't approved and inventories continue to build. A U.S. market overflowing with oil is something to keep an eye on, no matter what side of the oil market is better for your personal situation.