Last month, an explosion and fire roared through an ExxonMobil Corporation (NYSE:XOM) refinery in Torrance, California. With oil refining out of commission in the area, West Coast gasoline and petroleum products shot up in price, a glimpse into a world where oil stops flowing. Here's what happened.

The details
February 18, 2015 was not a good day for ExxonMobil Corporation. While the exact cause of the explosion is still unknown, what is certain is that it resulted in four injuries, lock-downs at 14 nearby schools, and the temporary shutdown of a 750-acre plant that normally churns through 155,000 oil barrels every day to produce nearly 10 percent of California's gasoline.

On the day of the explosion, ExxonMobil Corporation shares dropped around 2%. And although it's impossible to know how much of the oil company's stock price drop since then is in response to the explosion, how much is in response to Warren Buffett's Berkshire Hathaway ExxonMobil sell-off, or how much is because investors' Ouija Boards pointed in different directions, Exxon stock has steadily underperformed the S&P 500 (SNPINDEX:^GSPC). 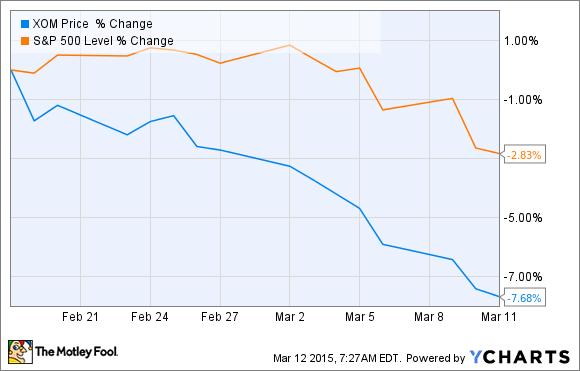 West Coast woes
When we want something in America, we get it. So, what stopped the West Coast from simply shipping in refined petroleum products from elsewhere? Two things.

First, even in this day and age, geographic isolation can become an issue. With the Pacific Ocean to the West and the Rocky Mountains to the East, the West Coast region is actually relatively isolated.

And second, the refinery produces a special low-emissions fuel for California, Arizona, and Nevada that creates a miniature supply market all its own. The ultimate result: a 22% spike in gasoline spot prices to $2.02 per gallon over just five days. That jump pushed West Coast gas prices a whopping $0.41 per gallon above New York Mercantile Exchange prices.

The end of oil?
This isn't the first time the West Coast has been strapped for gas. In 1988, an explosion at the same factory killed one person and injured nine, and a 1994 explosion injured 28. Similar West Coast supply disruptions in 2008, 2009, and 2012 also resulted in higher retail prices.

But those higher prices are exactly the reason ExxonMobil Corporation won't disappear overnight -- oil shortage or not. Limited supply doesn't necessarily create limited sales. In fact, it can be a lucrative opportunity to raise prices.

But over the long term, those prices may deter oil users who have better options. We've already seen it happen with electricity. Oil use dropped 75% from 2002 to 2012 as other generation fuels (most notably natural gas) shot up in generation capacity. Currently, our auto industry is undergoing a gasoline divorce as carmakers like Tesla Motors, Inc offer all-electric options.

But for now, a refinery explosion and temporary price hike isn't the economic shock that shakes America off oil. It does, however, provide investors with a unique insight into a future where oil supply might not always meet demand -- and its ensuing price effects on everything from gasoline to Exxon stock.