I'm a hopeful optimist by nature. And that's why I never seem to get caught up in the fear and gloom that grips the market, especially the oil market, which is known for its long, harsh winters of weak oil prices. Those winters have all passed, and this one will, too. That's why I'm still optimistic three energy stocks the market has left for dead -- Linn Energy (NASDAQ: LINE), SandRidge Energy (NYSE: SD) and Seadrill (NYSE: SDRL) -- could rise again from the grave this year and give my portfolio a boost.

One foot in the grave
The unexpected and dramatic 50% drop in the price of oil since last summer has had a devastating impact on energy stocks. Several are struggling to survive and avoid bankruptcy while others like Linn, SandRidge and Seadrill aren't that far gone just yet, but certainly are closer to the grave than investors would like. That's clear when we see their one-year stock price performance, which just shows how far these stocks have dropped in the past year. 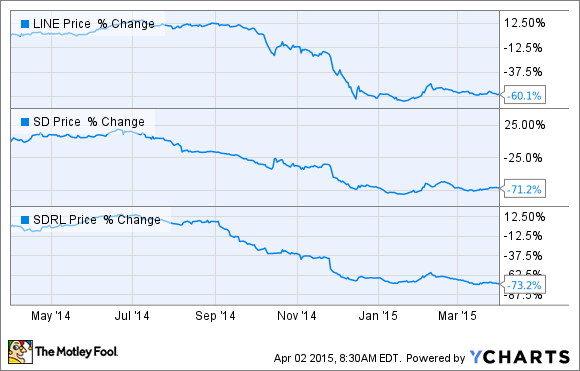 The big drop in these stocks is a sign that investors are fearful that these companies won't make it if oil prices stay weak for too much longer. This drop has been a real drag on my returns -- and my ego, as I've been pretty vocal in my belief of their bright futures. However, I still think each has a bright future, if oil prices rises again.

What killed the energy stock?
While virtually all energy stocks are down over the past year due to weak oil prices, this trio was hit harder than most. All three dug their own grave by borrowing a lot of money to fund ambitious growth goals when oil prices were higher. That debt has become a noose around their necks and could send each to an untimely death.

In order to avoid that fate all three companies are working to pay down their debt burdens. Seadrill and Linn both cut their dividends in order to preserve cash to be used for reducing their leverage, while SandRidge has dramatically cut spending on new wells so that it doesn't dig itself into an even deeper hole. However, those moves might not be enough to save these stocks; what they really need is for higher oil prices to come back to life.

The good news is that there are signs on the horizon that oil prices could spring back later this year. Demand for gasoline in the U.S. is picking up and is up 2% over the past year. Meanwhile, oil supplies are falling as drillers cut back on new wells. This could lead to a second-half rally in oil prices and a resurrection of my left-for-dead energy stocks.

Investor takeaway
For better or worse I'm an eternally optimistic kind of guy. That's why I've yet to sell any of my foul-smelling energy stocks. I hold on to hope that oil prices will rise again, which would bring these three energy stocks back from the grave.