Investors weren't expecting an update on Tesla's first-quarter deliveries until it reported earnings. Tesla typically reports first-quarter results in May. But this earlier reporting time for deliveries is the new norm, according to the automaker.

"Going forward, Tesla will publish the number of new car deliveries within three days of quarter end," the company explained in a press release Friday. "We have decided to take this approach, because inaccurate sources of information are sometimes used by others to project the number of vehicle deliveries."

The numbers
Tesla delivered 10,030 Model S in the first quarter, up 55% from the year-ago quarter and 530 units higher than the company's guidance. The quarter's deliveries mark a new record for the company, up from its previous all-time high of 9,834 vehicles in the fourth quarter. 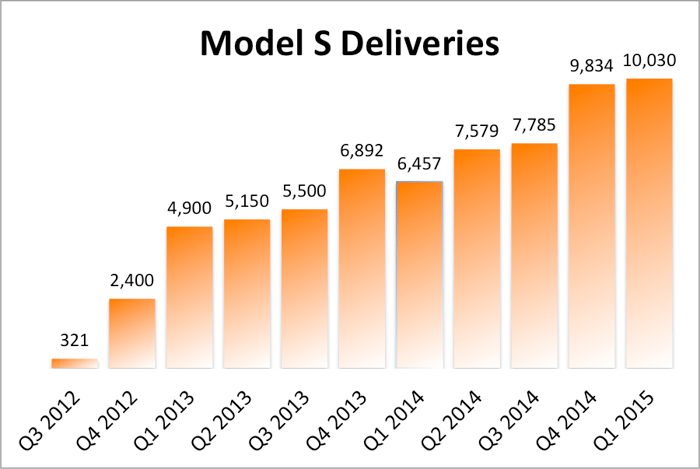 "There may be small changes to this delivery count (usually well under 1%), as Tesla only counts a delivery if it is transferred to the end customer and all paperwork is correct," Tesla said. In its fourth-quarter letter to shareholders, Tesla predicted it would produce 10,000 vehicles during the first quarter and only deliver 9,500, citing approximately a week of planned factory downtime (for tooling upgrades and to allow Tesla's factory workforce to rest) and efforts to grow the number of cars in transit to Europe and Asia to support sales in these markets.

Looking ahead
For the full year, Tesla said in its fourth-quarter letter to shareholders it plans to deliver 55,000 vehicles, including sales of its Model X SUV, which management has said will begin shipping this summer. In the third quarter, Tesla said it expected to sell about 50,000 Model S units in 2015. Presumably, therefore, Tesla plans to sell 5,000 Model X units.

Tesla emphasizes that its deliveries are a reflection of supply, not demand, since total global orders for the Model S have been well ahead of supply.

For Tesla orders to outpace the company's ability to ramp up demand in 2015, the company is betting on its October 2014 update to its Model S. The update made advanced autopilot features standard and introduced a dual-motor all-wheel drive option, among other new features.

"As our All-Wheel Drive Dual Motor cars become available in Q1 for customer test- drives worldwide, we expect this hands on experience will be a catalyst to even more orders," Tesla explained in its fourth-quarter letter to shareholders.

For the rest of the year, Europe will likely serve as a key catalyst for Model S sales growth. While Tesla has been delivering its dual-motor Model S to customers in the U.S. since December, deliveries didn't begin in Europe until the second half of February. Model S deliveries in Europe in 2014 accounted for 30% of Tesla's sales and doubled from the year before.

While Tesla hasn't scheduled its first-quarter earnings release yet, it usually takes place in the first half of May.