Electric-car maker Tesla Motors (TSLA -0.34%) believes it can deliver 50% more Model S cars in 2015 than it did in 2014. This growth would put deliveries of Model S at 47,500 -- quite an impressive number for a car with a $70,000-plus starting price. While such a significant sales increase for Model S may initially be difficult to fathom, an understanding of just how much better the company's newest flagship version of the Model S is than its predecessor actually makes this forecast seem quite reasonable.

Understanding Tesla's new dual-motor option
Tesla first announced its dual-motor all-wheel-drive version of its Model S in October. The new and improved versions of the Model S took the vehicle to a whole new level.

First, consider the extent of the new autopilot features -- an area in which Tesla was previously severely lacking comparably priced sedans. Announced in the same event that the dual-motor Model S was unveiled, Tesla's new autopilot features launched the company to a leadership position in the space. Safety features like automatic monitoring of stop signs, traffic signals, pedestrians, and unintentional lane changes were finally added to the Model S in the 2015 model as standard. Available as an optional upgrade, Tesla introduced traffic-aware cruise control, lane-keeping with automatic steering self-parking, automatic lane changes with the tap of the turn signal, the ability to summon your vehicle to you on private property, and more. Tesla is progressively rolling out these features to its newer cars equipped with the required sensors through over-the-air software updates. All autopilot features are available for both rear- and all-wheel-drive versions of the Model S. 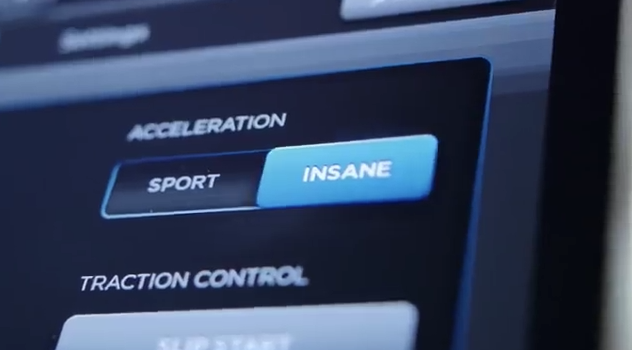 Tesla's P85D has an "insane" mode option for acceleration. No one has yet to assert that the mode is not appropriately named. Image source: Tesla Motors.

Tesla explains on its website the advantages of its approach to all-wheel drive versus a gas-powered vehicle's approach:

With two motors, one in the front and one in the rear, Model S digitally and independently controls torque to the front and rear wheels. The result is unparalleled traction control in all conditions.

Conventional all-wheel drive cars employ complex mechanical linkages to distribute power from a single engine to all four wheels. This sacrifices efficiency in favor of all weather traction. In contrast, each Model S motor is lighter, smaller and more efficient than its rear wheel drive counterpart, providing both improved range and faster acceleration.

Anyone who has driven both Tesla's P85 and Tesla's P85D will attest that the company has achieved a far better car and a much more convincing value proposition in the newer model. And keep in mind, it's the Tesla models without all-wheel drive, "insane" mode, and industry-leading autopilot features that convinced Consumer Reports to name the Model S the top vehicle pick overall for two consecutive years.

Tesla's catalyst for sales in 2015
The initial interest in Tesla's dual-motor all-wheel-drive Model S has made the company confident demand for the car will continue to grow rapidly in 2015.

"We also substantially broadened the appeal of the Model S by introducing Dual Motor all-wheel drive and Autopilot," Tesla explained in its 2014 third-quarter letter to shareholders. "Based on net orders since that introduction, excluding the extraordinary initial demand peak, we are confident of a 50% increase in both net orders and deliveries for Model S alone in 2015."

The optimistic outlook for Tesla's dual-motor vehicle continued into the company's Q4 letter to shareholders.

Customers responded [to the launch of dual motor] by placing a record number of Model S orders in the quarter. While the level of Q4 orders likely reflects some pent up demand from customers who had been waiting for an all-wheel drive Model S, we also note very few customers have had an opportunity to see, or even test drive, our most innovative car yet. As our All-Wheel Drive Dual Motor cars become available in Q1 for customer test-drives worldwide, we expect this hands on experience will be a catalyst to even more orders.

One particular market, which until the last week of February was virtually untapped when it comes to dual-motor versions of the Model S: Europe. While dual-motor test drives in the U.S. are still just ramping up, Tesla is only two weeks into its first deliveries of the dual-motor Model S in Europe.

Tesla spokeswoman Alexis Georgeson told The Motley Fool after the first week of dual-motor deliveries in Europe that the region is a "very strong market for dual motor and demand for the product has been high."

Europe is an important market for Tesla, with 30% of deliveries in 2014 coming from the region and 2014 delivery volume doubling from the year before.

As customers test-drive the dramatically different 2015 dual-motor Tesla Model S, demand for the Model S should continue to increase. In fact, Tesla is so confident demand for its sedan will increase substantially in 2015 that management believes it can achieve its aggressive full-year guidance even if it had zero sales in China.