Tuesday was a win for Tesla (NASDAQ:TSLA). I would say a big win, but awards like these have been a common occurrence for the automaker in the last few years. Consumer Reports named the Tesla Model S the best overall vehicle in 2014, making it the rating agency's top pick for 2015.

"For all of the impressive new vehicles released in 2014, none was able to eclipse the innovation, magnificence, and sheer technological arrogance of the Tesla," Consumer Reports said.

This is the second year in a row the Model S was ranked first in Consumer Report's rankings. The accolade joins a long list of awards the vehicle is accumulating.

With so many awards going to the Model S, an investor must ask: Is the Model S really a one-hit wonder, or is it a sign of a new approach to vehicle design and performance that is superior to the internal combustion engine vehicle the auto industry is wedded to?

What being the top pick means
What exactly does it mean to be included in Consumer Reports' coveted top picks list? The models must be among the best in CR's overall road-test score, have at least an average reliability rating, and have an outstanding safety rating.

In short, "[I]f you corner a Consumer Reports auto expert at a party and ask, 'What car should I buy?' these cars will be the answer," the agency explained in the announcement of this year's top picks.

The Model S scored 99 out of 100 on the overall road-test score and had average reliability (surprisingly good for a luxury car). The National Highway Traffic Safety Administration, or NHTSA, has awarded the Model S an overall five-star safety rating, with five stars in every subcategory.

The Model S's spot at the top for the second consecutive year is a testimony to the company's over-the-air software updates that are beamed to its fleet over the Internet -- a feature Consumer Reports praised: "Through the course of their life cycles, cars become obsolete quickly as newer models appear with updated gizmos. But with Tesla's over-the-air software updates, a Model S that came off the line in 2013 has many of the same new features as one built today."

Add it to the growing list
The Model S's growing list of accolades is incredibly impressive. Recently, Tesla aftermarket accessory site Evannex summed up the awards in an infographic. 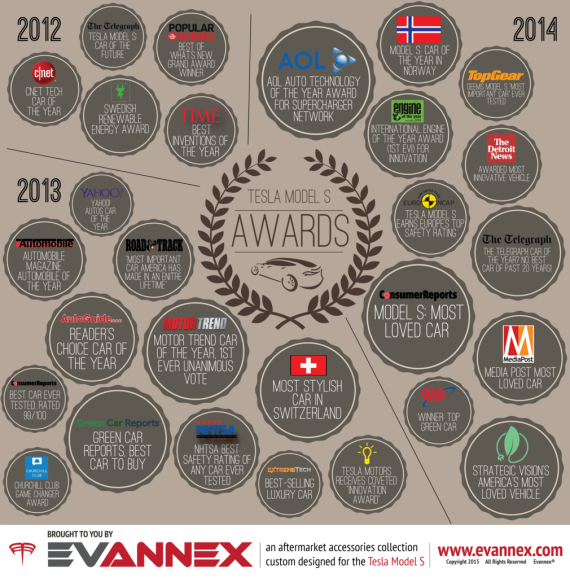 In 2015, Consumer Reports will be testing Model S vehicles on a whole different level, with dual-motor all-wheel drive and upgraded interiors.

Longer-term, it will be interesting to see whether the company's Model X crossover and its planned lower-cost Model 3 for 2017 will be able to achieve the same level of clout.

What do you think? Has Tesla's approach to design, performance, and functionality by making fully electric cars with the battery across the floor of the vehicle opened new doors to a superior approach to autos? Or will the company's dominance of auto accolades be short-lived as either internal combustion engine manufacturers catch up or come up with a better way to build an electric car?