Oil-related stocks such as frack sand producers US Silica Holdings (NYSE:SLCA), Hi-Crush Partners (OTC:HCRS.Q), and Emerge Energy Services (NYSE: EMES), have had a miserable six months, their stock prices punished by the near-50% collapse of oil prices. Yet three major threats could cause their share prices to plunge even further. 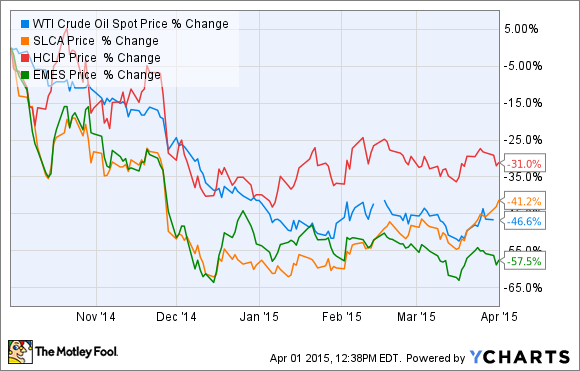 The risk of oil prices continuing to fall, threats to existing contracts, and the risk of distribution cuts are all factors that investors need to be aware of. Let's take a look at these three factors and how they could impact the future of these companies.

Oil prices have not necessarily hit bottom
Oil prices are highly complex and unpredictable, determined by geopolitical events and any number of other variables. One such upcoming event could be a deal between the so-called "P5+1" powers -- the five permanent members of the U.N. Security Council and Germany -- and Iran over the nation's long contentious nuclear program.

Should a deal ease sanctions against Iran, up to 1 million barrels per day of new Persian crude could flood the world market within a few months, according to Iranian Oil Minister Bijan Zanganeh. Given that the current oil crash resulted from a global supply glut of about 1.8 million barrels per day, a 56% increase in excess supply could devastate world petroleum prices. That would likely drive oil-related stocks to new lows and potentially trigger my most immediate concern for frack sand suppliers: renegotiation or even cancellation of long-term contracts as the price of oil potentially declines below the break even prices of production in several key areas of the country. Thus rig counts and frac sand demand could plunge even further than it already has and further increase the oil industry's distress.

Long-term contracts might not be as protective as you think
I have previously pointed to the fact that 70%, 88%, and 87% of US Silica's, Hi-Crush Partners', and Emerge Energy's respective current and medium-term production is protected under contracts that extend out as long as four years.

Such contracts including the "take or pay" variety -- which ensure payment to frac sand suppliers even if customers refuse to accept delivery of sand -- provide considerable downside protection against a short-term oil collapse. However should petroleum prices remain low or fall further in the coming few quarters, oil services companies might be forced to reconsider these contracts due to pressure from their customers to reduce fees.

Meanwhile, Magnum Hunter Resources (NYSE: MHR) CEO Gary Evans, during his company's last conference call, said he expects oil services prices to decline by 40% over the next year: "The oil-field service sector has got to feel the pain."

While contract termination fees would provide some short-term revenue for frack sand suppliers, losing highly profitable contracts would more importantly cut into long-term cash flow predictability which might result in distribution cuts in the future..

Distribution cuts could send prices crashing
Unlike US Silica, which is a corporation, Hi-Crush Partners and Emerge Energy Services are master limited partnerships, or MLPs. This means they usually pay out the majority of their excess cash flow as distributions to investors in order to retain substantial preferential tax benefits. This makes MLPs a favorite of high-yield income investors, but unit prices can be hammered when MLPs are forced to cut their distributions.

Hi-Crush and Emerge Energy are new and fast-growing MLPs that went public when oil prices where high and frack sand prices were soaring. They invested heavily in new mines, and as production and sales grew, so did their payouts. Emerge Energy Services is a variable-pay MLP that pays out 100% of its distributable cash flow each quarter. That means its payout is inherently volatile; however, favorable market conditions and fast production growth since its IPO have enabled the MLP to raise the dividend for six consecutive quarters.

Thus, shareholders might not be aware of the volatile nature of its payout; should the MLP be forced to reduce its distribution in quarters ahead, the stock price might take an exceptionally hard beating as panicking income investors desert en masse.

Takeaway: major risks remain could hurt short-term growth prospects and share prices
While the world's long-term demand for oil is likely to provide an enormous growth catalyst for these frac sand suppliers, in the short-to-medium term oil prices can't be predicted with any certainty. The risk of crude prices continuing to fall could trigger substantial negative consequences, which could send share prices tumbling further. Thus despite my long-term bullish outlook for these stocks I would caution investors to consider these threats as well as their individual risk profiles before potentially investing in these frac sand producers as part of a well diversified income portfolio.