Please ensure Javascript is enabled for purposes of website accessibility
Log In Help Join The Motley Fool
Free Article Join Over 1 Million Premium Members And Get More In-Depth Stock Guidance and Research
By Adam Galas - Mar 25, 2015 at 10:20AM

If you're staring at sinking oil prices, you're missing the bigger picture.

Despite the recent oil crash I'm more bullish than ever on the long-term prospects of oil service giants Halliburton (HAL -0.91%), Schlumberger (SLB -0.50%), and Baker Hughes (BHI).

In my opinion, the recent share price drops -- courtesy of the oil crash -- represent an excellent long-term buying opportunity because of three factors.

First, two megatrends are currently under way that could produce market-beating returns over the long term for these oil service blue chips -- the continued growth of the world's population and economy, and the large increase in oil demand that is likely to follow as a result.Finally, I think the impressive advantage that these oil service blue chips have in terms of innovation and improvement in drilling techniques -- especially fracking technology -- should serve their investors well in the coming years and decades. Let's take a closer look at how these factors contribute to a bright future for these stocks. 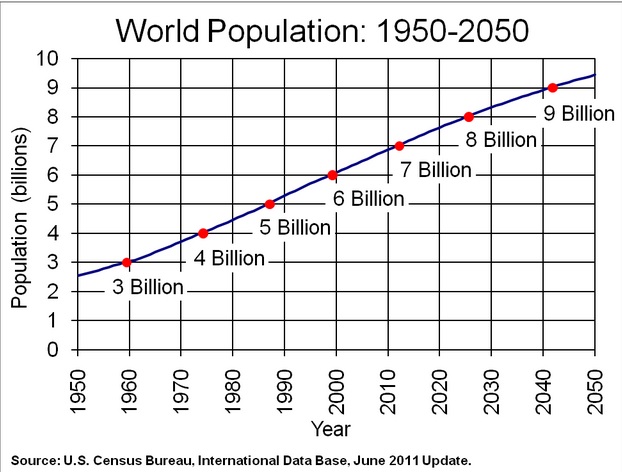 According to the U.S. Census Bureau, global population will soar from 7 billion today to about 9.5 billion by 2050. This growth in population is expected to greatly increase the overall size of the global economy. In fact, analyst company PricewaterhouseCoopers estimates that the global economy will double by 2037, and nearly triple by 2050.

The majority of this economic growth will come from developing countries where a booming middle class -- defined as purchasing power between $15,000 and $36,500 -- is expected to nearly triple in size to a staggering 4.8 billion people by 2030 alone.

All of this economic growth and increased buying power is expected to greatly increase the global demand for oil, despite strong growth in energy efficiency and renewable technology. In fact, the International Energy Agency, or IEA, estimates that global energy demand will increase by 37% by 2040, with daily oil demand increasing by 16% or 14 million barrels per day.

Most importantly for investors is the kind of investments required to achieve and sustain that kind of increased oil production. The IEA projects that oil companies will need to invest $900 billion per year, or $22.5 trillion through 2030 alone, to meet the world's soaring oil demand.

The magnitude of future investment needed to satiate global oil demand should bring music to the ears of long-term investors in these companies, whose services will be needed to supply the oil markets for decades to come.

Why these oil service blue chips should be on your radar
OK, so demand for oil services will be enormous in the coming years. But why does the future look especially bright for these specific companies? The answer lies in their enormous scale which grants them a competitive advantage -- especially when it comes to the fracking industry.

For instance, the most advanced form of fracking requires a movable tube-like sleeve that fits into the well bore drill bit  and allows for greater extraction of trapped oil. Larger oil service companies such as Schlumberger and Halliburton -- which is acquiring Baker Hughes -- have larger R&D budgets than smaller competitors such as C&J Energy Services or Superior Energy Services and can acquire new specialized technology or entire companies to make their own fracking services ever more cost effective and competitive.

An example of this is Schlumberger buying Smith International -- the world's leading supplier of drilling fluids at the time of the acquisition -- for $11 billion in 2010 or Schlumberger's 2013 acquisition of Gushor -- a geochemistry and fluids analysis specialist for the Canadian tar sands industry.

With oil prices collapsing and smaller oil service companies facing potential distress, the greater availability of cheap capital to these oil service giants means they are in an optimum position to acquire weaker competitors and obtain the kind of specialized technology that can help them grow profits when oil prices eventually recover.

Investor takeaway
In my opinion, long-term energy investors shouldn't fear the oil crash but rather embrace it as an inherent part of the oil industry and thus view it as a great long-term buying opportunity. Think of it this way; the more cheap shares of blue-chip oil service stocks such as Halliburton and Schlumberger -- whose technological edge could greatly increase their ability to secure the lion's share of future oil services contracts -- you can buy when oil is low, the better. Rather than worry over short-term losses think about you're potential long-term returns once oil prices recover due to the immense future demand increase that a larger and richer world population is likely to create.

Adam Galas doesn't hold positions in any companies mentioned but does leads The Grand Adventure dividend project, which owns Halliburton in several portfolios.