What: There wasn't a whole lot of good news for Halcon Resources Corp (NYSE:HK) investors in March. The company saw its stock downgraded to sell by an analyst that said its acreage is awful. Meanwhile, credit rating agency Moody's (NYSE: MCO) put it and a 11 other energy companies on its list of companies with the worst below investment grade debt ratings. This analyst negativity, when combined with continued weakness in oil, led to a 19% sell-off in the stock during the month of March. 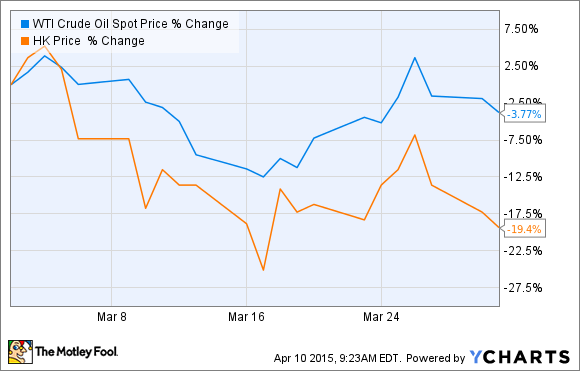 So what: The news that could have the deepest impact on Halcon Resources' operations is the fact it was added to Moody's list of companies with the worst credit ratings. That's because companies on this list are in the greatest danger of a future bankruptcy. In fact, during the first quarter of this year of the 18 companies that dropped off the list 39% did so because they'd filed for bankruptcy while another 33% had their ratings withdrawn. Only 28% of the company's that left the list in the first quarter did so because they'd graduated due to either a ratings upgrade or an improved outlook.

Now what: Halcon needs a few things to go right in order to see its stock rebound in the year ahead. Obviously, a rebound in oil prices will help. However, the company also needs to fix its weak balance sheet in order to improve its credit rating. In April that company did do something to address its weak balance sheet after it entered into a debt-for-equity swap with one of its bond investors. That swap will clear $116.5 million in bonds off its balance sheet, however, given that it had more than $3.7 billion in long-term debt on its balance sheet the company still has a long way to go.