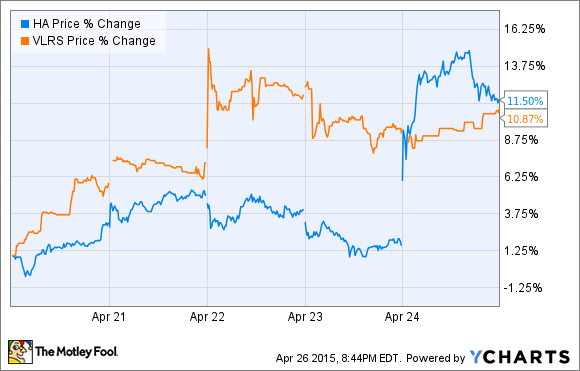 Yet even after these big gains, there's plenty of upside left for both stocks. Investors still seem to be undervaluing their long-term earnings potential.

Surging profitability at Volaris
A year ago, Volaris was in the midst of a rough period of high fuel prices and overcapacity in the Mexican air travel market. As a result, it posted an ugly -17.6% operating margin in Q1 2014. While the first quarter tends to be seasonally weak, this was still a shockingly bad result.

However, since then, Volaris has moderated its domestic capacity growth, as have most of its competitors. Instead, it has focused its growth on the U.S. market, where demand has been much stronger. Meanwhile, oil prices have fallen dramatically, creating a huge earnings tailwind. Volaris has also grown its ancillary revenue streams.

The result was that Volaris achieved a 9.2% operating margin last quarter. That was a whopping 27 percentage points better than the year-earlier result.

Volaris did benefit from a calendar shift, as the week leading up to Easter -- a heavy travel week in Mexico -- fell partly in March this year, whereas it fell entirely in April in 2014. Even so, the vast majority of its profit improvement comes from its improving business fundamentals.

Despite Volaris' strong momentum, airline analysts have surprisingly modest expectations for its future performance. While Volaris' management told investors that the analyst consensus was roughly in line with the company's expectations for Q2, that quarter will be negatively affected by the Easter calendar shift that helped Q1.

By contrast, analysts' estimates for Volaris' Q3 earnings have actually fallen in the past month. Analysts are now projecting that Volaris will achieve an operating margin around 14%-15% in Q3. That would be a respectable 5-6 percentage point improvement over Q3 2014.

However, given Volaris' growing focus on the more lucrative U.S. market, the sharp drop in oil prices, and the carrier's continuous cost-reduction efforts, these estimates seem too conservative. The same can be said for analysts' Q4 earnings estimates. If Volaris can keep up its momentum, its stock is likely to continue rising as well.

Hawaiian Airlines: enjoying cheap oil
Hawaiian Airlines gave investors a scare three months ago when it projected that total unit revenue would fall 3.5%-6.5% in Q1. As it turned out, booking trends improved as the quarter went on, while cargo revenue jumped during February as a West Coast port slow-down forced some importers to use more air transport.

When all was said and done, total unit revenue declined just 1.7%. This was a solid result given that the strong dollar and falling fuel surcharges on Asian routes caused a combined 3 percentage point revenue headwind.

Meanwhile, Hawaiian's economic fuel cost per gallon plummeted 28.7% year over year. This allowed Hawaiian to earn a 7.4% pre-tax margin, after losing money in Q1 last year. Moreover, Q1 is always the weakest quarter of the year because of the highly seasonal nature of leisure travel.

For Q2, Hawaiian's management expects a 1%-4% decline in total unit revenue, again driven by foreign currency and fuel surcharge headwinds. But once again, the decrease in unit revenue will be easily offset by falling fuel costs. Analysts on average expect Hawaiian Airlines' EPS to nearly double year over year in Q2.

Meanwhile, Hawaiian's management wisely used the sharp sell-off in its stock price three months ago as an opportunity to retire most of the company's convertible debt. The company also announced a $100 million share repurchase program last week, which will further reduce its fully diluted share count.

Hawaiian Airlines stock currently trades for only 8.4 times projected 2015 EPS. Thanks to the company's ongoing efforts to reduce its share count from the peak of 66.2 million shares reached in Q4 2014, EPS will probably rise further in 2016.

The impending arrival of a new fleet of A321neo planes beginning in 2017 could drive another step change in Hawaiian's earnings thanks to that model's low operating costs. In short, Hawaiian Airlines is poised for strong long-term EPS growth -- something not reflected in its bargain-basement earnings multiple.

Great value either way
Both Volaris and Hawaiian Holdings are well-positioned for long-term earnings growth. Volaris' industry-leading cost structure represents a huge competitive advantage that will allow it to gain share in the U.S.-Mexico travel market while stimulating growth in Mexican domestic air travel, all while earning a healthy profit margin.

Meanwhile, Hawaiian Airlines' new fleet of A321neos should allow it to achieve a superior cost structure to its main rivals in the massive U.S. West Coast-Hawaii travel market. It will also benefit over time from the growth of inbound travel to Hawaii from developing markets in Asia.

Both carriers are trading at surprisingly low valuations in light of their opportunities. Long-term investors should consider scooping up some shares now, while they are still fairly cheap.