At the time, I argued that investors had overreacted, as Hawaiian Airlines was still on pace to produce strong earnings growth in 2015. Now, the company has revealed that its January guidance was overly conservative (or pessimistic, depending on your perspective). First-quarter revenue and costs will both come in better than expected. 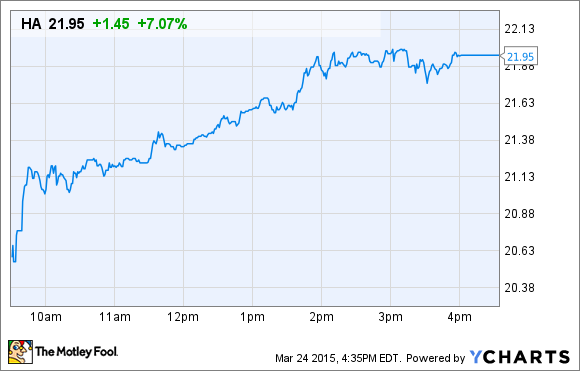 This news helped Hawaiian shares jump 7% on Tuesday. With earnings estimates likely to start rising again and the stock trading for just 8.4 times projected 2015 EPS, Hawaiian Holdings shares could soon move back toward the all-time high reached earlier this year.

Hawaiian's management pointed to a 3 percentage point headwind from the stronger dollar and lower fuel surcharges on certain international routes. It attributed the rest of the decline to a sharp rise in industry capacity on routes from the U.S. West Coast to Hawaii.

On Tuesday, Hawaiian Airlines dramatically revised its guidance. It now expects a much more modest unit revenue decline of 1.5%-3.5% due to better than expected passenger revenue performance and higher cargo revenue.

Hawaiian's non-fuel unit cost guidance also improved significantly. Non-fuel unit costs are now expected to decline modestly, rather than rising 1.5%-4.5%. That said, most of this savings will be offset by an increase in the expected jet fuel price for Q1. Additionally, some maintenance expenses will now occur later in the year, so the impact of this guidance update on full-year unit costs is unclear.

What next?
Hawaiian Airlines' future unit revenue trajectory could be key to whether the shares can keep gaining ground this year. Fortunately, the company's guidance update bodes well for unit revenue during the upcoming spring and summer seasons.

As a leisure carrier, Hawaiian Airlines sells most of its tickets pretty far in advance. Unlike business-oriented carriers, Hawaiian doesn't rely on last-minute ticket sales to drive its revenue and earnings.

This means that the company probably had a pretty good handle on its January and February unit revenue by the time it offered its initial guidance in late January. Thus, the upside surprise probably came in March: the last month of the quarter.

If booking trends improved for March, this confirms that Hawaiian Airlines is having an easier time filling seats and keeping fares now that it is entering a seasonally stronger travel period. In other words, the worst may be over for Hawaiian Airlines from a unit revenue perspective.

Strong profit growth on tap
If that's true, then Hawaiian Airlines' profit is set to soar. Even before Hawaiian updated its guidance, analysts were projecting that adjusted EPS would rise 69% year over year to $2.62.

But if the carrier can limit unit revenue declines to the low single digits, EPS could come in significantly higher: perhaps around $3. After all, Hawaiian is still on pace to pay about 30% less for jet fuel (its biggest expense) in 2015, compared to 2014.

This could set the stage for a quick recovery in Hawaiian Holdings stock. If the company has taken advantage of the dip in its stock price to continue repurchasing convertible debt -- thereby reducing its diluted share count and further boosting EPS -- this could add to the stock's gains. In the long run, patient investors will be the beneficiaries.