Recently, investors in General Electric Company (GE 2.45%) saw their stock register one of its biggest single-day increases in years after announcing a plan to dispose of GE Capital. The deal involves selling most of its assets in GE Capital Real Estate to Blackstone, with Wells Fargo & Co. intending to acquire a portion of the business' performing loans.

At the time of this writing, the stock is outperforming the S&P 500 on a yearly basis, and this move very well may be just the beginning, as management's restructuring plan is just taking hold. Let's take a closer look at the investment thesis and why it makes GE an attractive stock to buy. 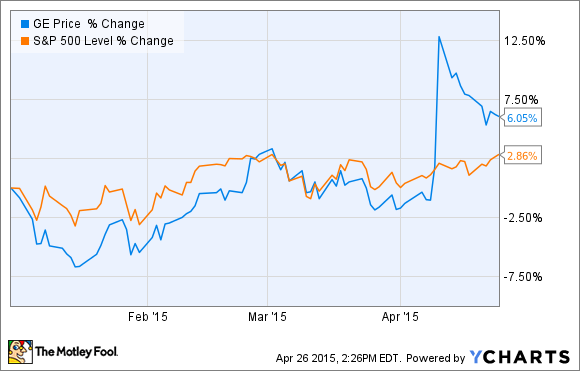 The game plan
There are three key drivers behind GE's stock price in the future, and all involve internal execution rather than a pure reliance on end markets. Of course, an industrial bellwether like GE is never going to fully escape the orbit of the economy. In fact, I would argue that a lot of GE's difficulties in the past decade come down to how its end markets performed -- something beyond GE's control.

However, times change, and many of GE's key end markets (aviation, healthcare, power) all have bright futures ahead. In addition, there are three reasons GE has an opportunity to start to outperform its peer group, and they aren't particularly dependent on the economy.

If GE executes on these three initiatives, then the next 10 years might prove a lot more profitable for investors than the last decade was.

Meanwhile, GE has already engaged in an IPO for its retail finance arm, Synchrony Financial, and when GE shareholders take up their right to exchange GE stock for shares in Synchrony, GE's share count will be reduced.

Quoting from the press release relating to the Blackstone/Wells Fargo deal, GE's management noted that it expects "...by 2018 more than 90 percent of [its] earnings will be generated by its high-return industrial businesses, up from 58% in 2014." Furthermore, growth in its industrial businesses is a lot stronger than the headline EPS number (which includes GE Capital) suggests.

The future
In 2015, GE's industrial businesses remain on track for operating earnings per share of $1.10-$1.20, up by solid double digits, and in line with expectations. In its first-quarter earnings presentation last Friday, management affirmed that it was on track to meet this target: "With sustainable growth, investments in competitive advantage, productivity programs and the addition of Alstom, we expect this performance to continue in the future," CEO Jeff Immelt said. "We will focus our efforts on these businesses."

The purchase of Alstom's energy assets should give GE the opportunity to consolidate an industry in which it's already a leader. The deal is more about generating growth through buying a complementary business and generating cost synergies, rather than purely going for top-line growth. Indeed, GE expects to generate $1.2 billion in cost synergies by the fifth year of the deal. The Alstom deal is expected to close in the second half of this year.

Industrial internet
The third driver of GE's stock price going forward is harder to grasp, but arguably it's the most powerful. Much has been made of the industrial internet, but many investors are left wondering how exactly it translates into increased profitability.

The industrial internet simply means the marrying of hardware to internet-enabled software -- the benefit being in the interaction of sensors, software, and big data analytics to better manage the performance of hardware.

One of the benefits of the greater interoperability that the industrial internet brings is that GE's services revenue should get a boost. For example, sensors on a GE industrial turbine could alert the customer about the need to service the machine. It may not be widely known among investors, but GE makes the bulk of its industrial profit from services rather than actual hardware sales.

The takeaway
In conclusion, the investment thesis behind GE largely lies in the idea that if management executes with the three strategic initiatives I've outlined, the company can outperform its peers. It may seem ironic to make this argument, given the company's turbulent decade dealing with difficult end markets, but long-term investment decisions are best judged on where the company is headed in 10 years' time, rather than where it's been.